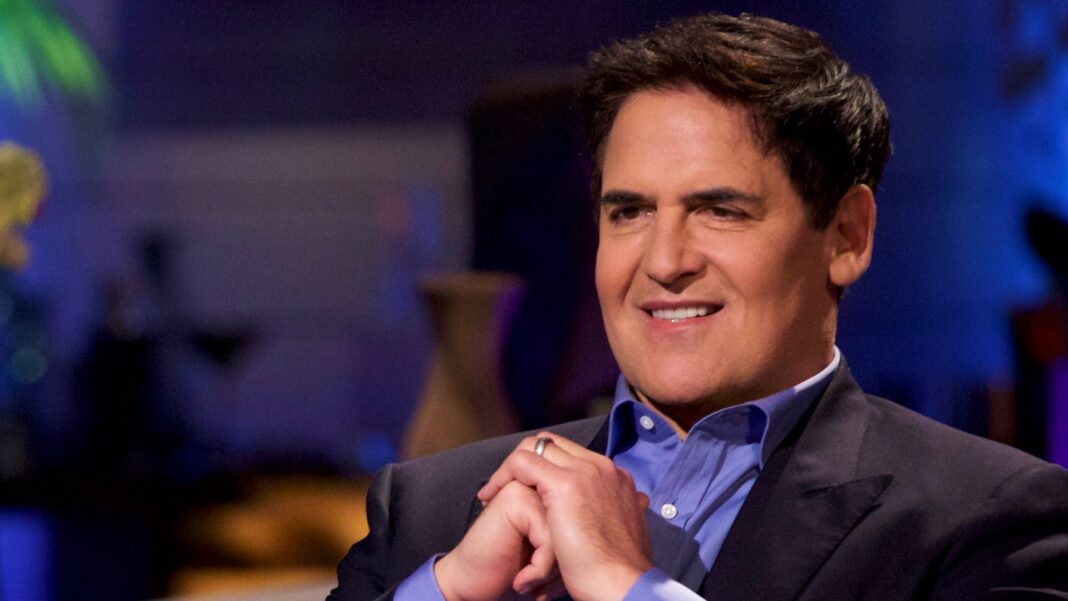 Mark Cuban has done it all.

Mark Cuban, entrepreneur and investor on ABC’s “Shark Tank,” has invested in hundreds of successful companies to date.

In the 1990s, Cuban founded and sold several start-ups that helped him reach billionaire status. These include the Dallas Mavericks and 2929 Entertainment.

But, according to Cuban, “the best investment I ever made was investing in me, first and foremost,” While Cuban certainly has a strong track record of self-driven financial success, he was not that rich in his early 20s.

“When you’re first starting, you may or may not have a job. You don’t have any money. You [have] complete uncertainty about your career,” he told Men’s Health. But “what I learned early on is that if I put in the effort, I can learn almost anything.”

Keep reading for ten things you can learn from Cuban’s entrepreneur success and add to your business.

“Treat your customers like they own you because they do.”

No matter how big your business gets, you never actually own it, according to Cuban. Your customers are the true owners, he says. “It is so much easier to be nice, to be respectful, to put yourself in your customers’ shoes and try to understand how you might help them before they ask for help than it is to try to mend a broken customer relationship,” Cuban says.

The management of the Dallas Mavericks (Mark’s team) focuses on making the game experience in the arena and on TV compelling enough to draw audiences and delight advertisers.

To determine whether the management team meets this goal, Cuban sits in the $2-$10 public seats during a game. If the nachos are slow to come and the beer is warm, he knows. Or the people let him know.

One important way to keep customers happy is to be accessible. “In every business, I have had, I have made sure my customers have had my email address and can reach me directly,” Cuban says. “I’ve given my email address out on national TV. Customers of any of our businesses can and do email me with questions and comments. Each email is an opportunity for me to solidify a customer relationship or add a new customer. I’m shocked that more entrepreneurs don’t do the same.

“When I got to Dallas, I was struggling – sleeping on the floor with six guys in a three-bedroom apartment. I used to drive around, look at the big houses, and imagine what it would be like to live there and use that as motivation.”

From “How to Win at the Sport of Business”

In 1982, Cuban moved to Dallas, Texas, and got a job as a bartender. What he really wanted to do was run his own business and retire by the age of 30. He told himself that he would do it “every day.”

After getting fired from his jobs as a salesperson at Your Business Software, Cuban decided the time was right to pursue his dream. He started his own software selling company, MicroSolutions, which he sold in 1990 for $6 million.

At the age of 32, Cuban was a millionaire who could afford to live in the big houses he used to drive by as a down-on-his-luck bartender. More importantly, he was living the life of his dreams.

I’m always selling. Always, Says Cuban. In business, you’re always selling to your prospects, investors, and employees. To be the best salesperson, put yourself in the shoes of the person to whom you’re selling.

Being an effective salesperson is significantly underrated as an important life skill, especially by engineers who often hope that a great product will sell itself. In thinking about the value of selling, it is wise to remember that people sell much more than just products. For example, you were selling when you received your first romantic kiss. People must sell themselves to a potential spouse or “significant other” person.

A business owner not only sells products but the company to employees and distributors. I have a good friend who likes to say that “everyone is talking their book all the time.” This is true, and it is clear that some people are much better at talking about their book than other people. It has been my experience that the best salespeople don’t even appear to be selling. I had a late friend who people said was such a good salesman that he could fire someone, and that person would not know they were fired until they were at home that night telling their spouse about their day. “Hey, wait a minute…” 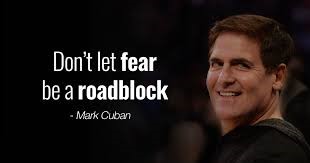 There is a vast gap between thinking about a business and doing what is needed to create the business and succeed. If you are not willing to do the work and take risks, nothing will ever be more than an idea. Cuban says that people who do the preparatory work first and avoid “fire, ready, aim” are much more likely to be successful in life. This point made by Cuban reminds me of Benjamin Franklin, who famously once said: “By failing to prepare, you are preparing to fail.”

5. Money shouldn’t be the Goal, Love What You do 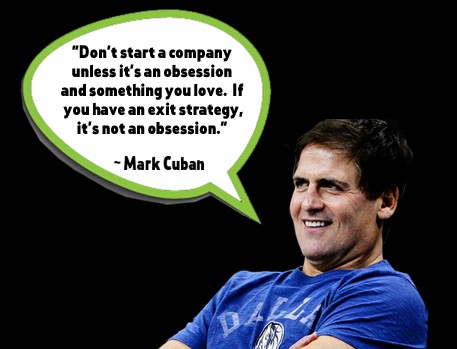 “Don’t start a company unless it’s an obsession and something you love. If you have an exit strategy, it’s not an obsession.” If you are a problem solver and not money-driven, the probability of creating a successful business goes way up. You will work harder and survive the tough times far better if you love what you are doing and are obsessed with the business. Missionaries are not thinking much about exit strategies since their focus is on getting the job done and achieving their objectives. 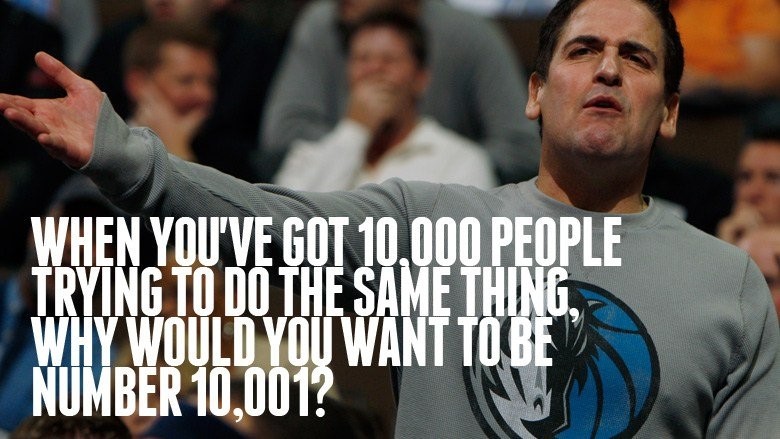 “When you’ve got 10,000 people trying to do the same thing, why would you want to be number 10,001?” “What I do know, at least what I think I have learned from my experiences in business, is that when there is a rush for everyone to do the same thing, it becomes more difficult to do. Not easier. Harder.”

How to Come Up with a Good Business Idea

Competition drives down prices to levels where financial return is equal to the opportunity cost of capital. That is the essential truth of capitalism and its engine. The goal in any business is to create some non-replicable advantage that is a moat against the competition. Barriers to entry should be the goal of any business.  The deeper and stronger the moat, the happier the business owner will be with their financial results.

Finding a source of differentiation is a beautiful thing. Harvard Professor Michael Porter puts it this way: “It’s incredibly arrogant for a company to believe that it can deliver the same sort of product that its rivals do and actually do better for very long.”  If you deliver the same product or service as your competitor, you, by definition, don’t have a moat.  The competition will, in that case, be based on price, and price-based competition inevitably degrades to a point where profit disappears.

As an angel investor, Cuban is always looking for companies that demonstrate a clear sense of market differentiation. In fact, he immediately dismisses any companies that aren’t carving out their own niche: “Wherever I see people doing something the way it’s always been done, the way it’s ‘supposed to be done, following the same old trends, well, that’s just a big red flag to me to go look somewhere else.”

If you want to repeat something that’s already been done, then you open a franchise. If you want to be a successful entrepreneur like Mark Cuban, you’ll have to do something different.

Great companies start without investors. He cites Apple, Dell, and Microsoft as a few examples. Given that he’s a venture capitalist and recommends not taking venture money, it’s certainly worth trying to avoid. That’s probably not possible in some cases – but it makes sense if you can pull it off.

There’s no room for excuses when launching a business. Not having much startup money or lacking a cache of professional connections should never stand in the way, Cuban says.

“Great entrepreneurs invest the time, no matter how many hours a day, to learn more about their industry and the business they want to start than anyone else,” he says. “They realize that ramen noodles and macaroni and cheese are the fuel they need because every other penny they get from working that night job is going to fund their business.”

And Cuban says he knows all too well about making those sacrifices. “When I started MicroSolutions, I had just been fired from my last job and was living in a three-bedroom apartment with five other guys,” he recalls. “I slept on the floor. My dinner was usually the late chicken dinner at Tom Thumb for $1.29. It allowed me to stay focused on turning MicroSolutions into a $30 million business.

9. You Can Drown in Opportunity

“If you are adding new things when your core businesses are struggling rather than facing the challenge, you are either running away or giving up.”

Rarely do entrepreneurs encounter just one opportunity? Their minds go crazy with new and exciting things beyond what they’re already doing. The possibilities seem endless, and chasing such possibilities while the core business struggles is a surefire recipe for turning the startup into the Titanic.

Instead, ensure your startup focuses on being the absolute best at executing its core business offerings. Everything else metamorphoses from there.

“Every minute that our top people or I spend dealing with the rest of the world is a minute not spent fighting the battle to make HDNet and HDNet Movies the best networks they can be here in the US, “Cuban wrote.

Spending most of your time on your core business will compound over the long term to yield handsome rewards.

10. Invest in only what you are Knowledgeable about