Zimbabwe’s Grace Mugabe due in South Africa court over assault 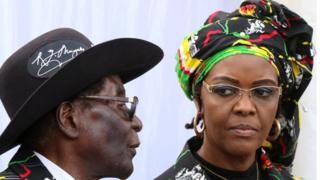 Fikile Mbalula said: “She’s not under arrest because she co-operated and handed herself over to the police.”

She is alleged to have attacked a young woman at a Johannesburg area hotel.

The woman, 20, accused Mrs Mugabe, 52, of hitting her in the face and put images of a head wound on social media. Mrs Mugabe has not yet commented.

South African police confirmed that the 20-year-old had registered a case of assault with intent to do grievous bodily harm.

The reason for the alleged attack is not clear.

The attack is said to have happened on Sunday evening.

Who is Grace Mugabe?

Zimbabwe Information Minister Christopher Mushowe told the BBC that he was unaware of the allegation.

Mrs Mugabe was in South Africa to be treated for an ankle injury, sustained during a road accident last month, when the alleged assault took place, according to Zimbabwean media.

It is not clear whether she was travelling on a diplomatic or a normal passport.