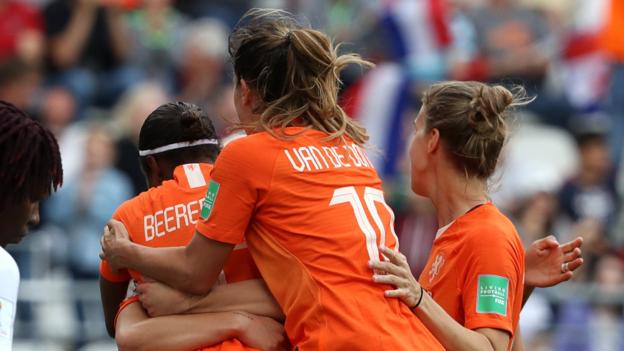 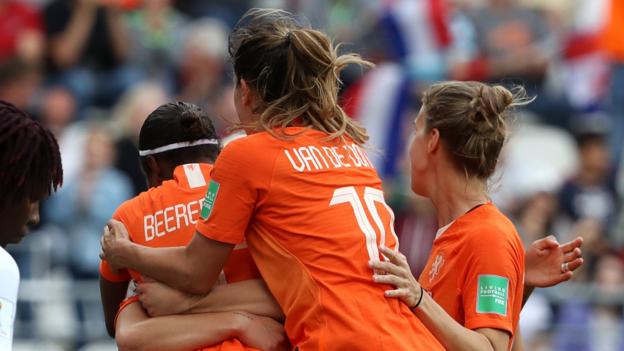 Anouk Dekker gave the Dutch the lead when she headed in before Christine Sinclair equalised to achieve the feat of scoring in five World Cups.

Beerensteyn’s close-range finish ensured the Dutch finished their group campaign with a 100% record.

They will now play Japan while Canada will face USA or Sweden.

Canada, semi-finalists in 2003, looked set to go 1-0 up in the second minute when referee Stephanie Frappart pointed to the spot after Janine Beckie appeared to have been fouled by Desiree van Lunteren in the area.

Sinclair stood with the ball on the spot but, after consulting with VAR, Frappart ruled the foul happened outside the area.

The intensity of the game increased after the European champions took the lead through Montpellier midfielder Dekker, who brilliantly got between two defenders to head in Sherida Spitse’s free-kick.

Canada were level soon after when Sinclair prodded in Jordyn Huitema’s cross at the far post. Huitema, 18, was not born when Sinclair made her international debut in 2000.

Dutch coach Sarina Wiegman decided to twist and brought on Beerensteyn in the 70th minute. Five minutes later, the FC Twente forward timed her run into the six-yard area to perfection to turn in Van Lunteren’s cross.

‘The Dutch team has made great strides’

Netherlands coach Sarina Wiegman: “I’m very pleased with the victory. We played against a stronger opponent, very structured, and it was a different challenge to the one we faced against Cameroon.

“But we played well as a team, adapted well, and the performance was great. In 2019, Canada had conceded just one goal before today. So to score two goals in one game is fantastic. Now I hope we’ll play well against Japan too. We played against them in the last 16 four years ago and know what they’re all about.

“They’re a very disciplined team and we expect the same again. But the Dutch team has made great strides since then.”

Canada coach Kenneth Heiner-Moller: “We played a team that was prepared and unafraid – they stepped forward and were very aggressive.

“We lost the ball too often, too early and were a bit stretched at times. And against good teams, if you give them an inch, they’ll take a yard.

“We were a bit tighter in the second half, but they took advantage well of the gaps we did leave. But we won’t mind playing anyone in this tournament. If we play to our best, we can beat anyone. I can’t even remember how long it is since we last lost a match and it’s a really bad feeling, I can tell you.”