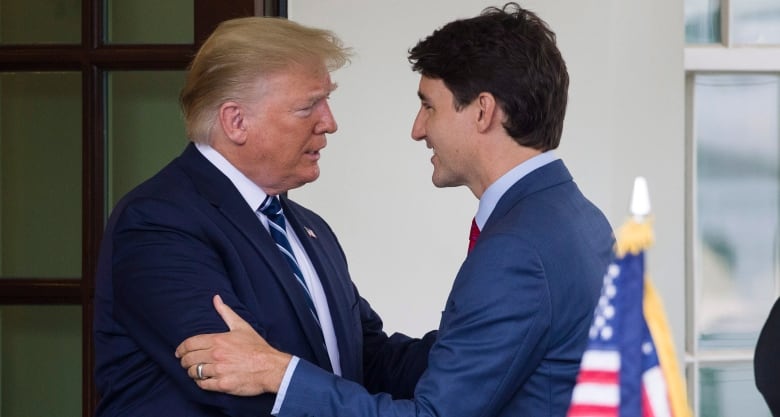 Prime Minister Justin Trudeau meets with U.S. President Donald Trump at the White House in Washington, D.C. on Thursday. Trudeau touted the merits of the recently renegotiated NAFTA and said he was moving forward on the ratification process in lockstep with the U.S. (Sean Kilpatrick/Canadian Press)

A year after Canada and the United States seemed poised to descend into an all-out trade war, Prime Minister Justin Trudeau felt able to boast today that he had completed a successful trip to the U.S. which saw representatives of both countries agree to work together in a number of key areas.

That spirit of cooperation was far from sight when U.S. President Donald Trump left the G7 leaders summit in La Malbaie, Que last June while firing off tweets accusing Trudeau of imposing unfair tariffs on U.S. goods and demanding that his signature be removed from a joint communique.

Asked today how he managed to rebuild the relationship with Trump that had frayed so badly during the re-negotiation of the North American Free Trade Agreement, Trudeau said it came down to remembering what is important.

“Throughout the NAFTA negotiations, which were contentious at times, absolutely, we remained focused on the things that really matter,” he said. “And because of that, we’ve come through it with a very strong and positive relationship with the United States, and indeed are moving forward on the ratification of an accord that will secure this important relationship for years to come.”

Trudeau’s visit was focused on pushing Congress to ratify the new NAFTA and getting the U.S. to help Canada with its ongoing diplomatic dispute with China. But the two leaders also managed to come to agreement in four other areas:

In his closing press conference today at the Canadian Embassy, with the U.S. Capitol building in the background, Trudeau said he had “extensive conversations” with Trump about Michael Kovrig and Michael Spavor, two Canadians being held by authorities in China.

Spavor, a businessman who worked in North Korea, and former diplomat Kovrig were picked up separately in December, shortly after Canada arrested Huawei chief financial officer Meng Wanzhou in Vancouver on an extradition request from the United States. She was later granted bail and is now awaiting court proceedings.

In March, China’s Central Political and Legal Affairs Commission accused Kovrig of stealing state secrets passed on to him by Spavor.

Since Meng’s arrest, China also has placed a number of trade hurdles in front of Canadian exporters — banning imports from two canola producers, tying up shipments of pork over paperwork issues, and putting unusual obstacles in the way of Canadian soybean and pea exporters.

PM Justin Trudeau and President Donald Trump address a number of issues including Iran, China and the Canadian hostages, NAFTA, and the Toronto Raptors. 12:54

Going into that meeting, Trump told reporters in the Oval Office that he will do whatever he can to help Canada engage with China.

“Anything I can do to help Canada, I will be doing,” Trump said.

Asked if he would bring up China’s imprisonment of Kovrig and Spavor when he meets with Chinese President Xi Jinping, Trump said that, “at Justin’s request, I will absolutely bring that up.”

Xi and Trump are expected to meet late next week in Japan on the sidelines of the G20 summit.

Not ruling out more tariffs

In that same pre-meeting chat with reporters, Trump refused to rule out further tariffs on Canada and Mexico. The U.S. imposed tariffs on Canadian and Mexican steel (25 per cent) and aluminum (10 per cent) last June, citing national security concerns.

The U.S. said it was concerned in part about cheap foreign steel finding its way through Canada into the U.S.

Canada took measures to prevent the transshipment of steel into the U.S. and struck a deal with Washington to monitor any potential surges in steel products that were unfairly subsidized abroad and then dumped in the U.S. via Canada. 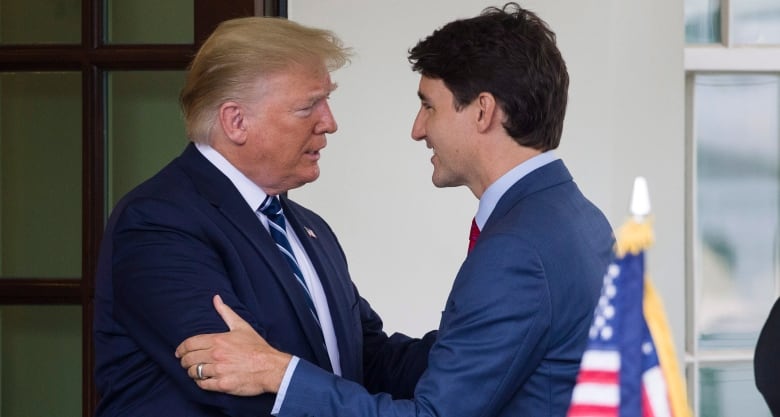 Speaking to reporters after the meeting, Trudeau said that Canadians share Washington’s concerns about transshipment of steel and the dumping of cheap steel in the North American market.

“I’m pleased to say that the Senate just passed, and therefore we have passed in record time, our bill on safeguards to ensure that the North American market on steel and aluminum remains protected from outside influences,” Trudeau said.

One of the main reasons for Trudeau’s trip to Washington was to discuss the ratification of the new NAFTA, retitled by Trump as the United States-Mexico-Canada Agreement (USMCA), which will require the support of Democrats to clear the U.S. House of Representatives.

“(Ratification) is really subject to the Democrats, so let’s see what happens,” Trump said in the Oval Office before meeting privatly with Trudeau. “But I really believe that (Speaker) Nancy Pelosi in the House will approve it and I think the Senate will approve it rapidly.”

The United States-Mexico-Canada Agreement needs the support of Democrats in the House of Representatives to become ratified, but Prime Minister Justin Trudeau says Canada will not get involved in that process. 0:40

Trump said the deal was good for all three countries and that he hopes Congress “can do what they have to do.”

Trudeau touted the deal as good for workers in all three countries and said Canada was moving forward with the ratification process in lockstep with the U.S., but cautioned that ratification in the U.S. is an internal American affair.

“I fully respect the conversations and discussions going on in their ratification process. I’ve offered to be helpful in responding or allaying certain fears, but Canada is not going to get involved in the ratification process that the American Congress needs to go through.”

Raptors to the White House?

Asked if the newly crowned NBA champions, the Toronto Raptors, would receive the traditional invitation to the White House, Trump was non-committal.

“An interesting question. They played phenomenal basketball. I watched a little bit of it,” he said. “They were really terrific. Congratulations, by the way. That was a great job by a great team, so we’ll think about that.”

Trump said he would discuss it but there were “a lot of other folks” coming to the White House.

According to Raptors head coach Nick Nurse, the team has been invited already to Parliament Hill to be celebrated for their achievement.

After attending a working lunch with Trump, Trudeau met with House Speaker Pelosi to discuss moving forward on USMCA.

Before the meeting, Pelosi said she was looking forward to talking trade and business with Trudeau and joked that she had no desire to bring up the subject of sports.

Trudeau bet Pelosi that the Raptors would win. Today, she settled the bet by presenting Trudeau with California wine and a selection of California almonds, pistachios and walnuts.

“Congratulations, Mr. Prime Minister, to the Raptors. They’re a great team, so great that they were able to win over a great championship team, the Golden State Warriors,” she said. 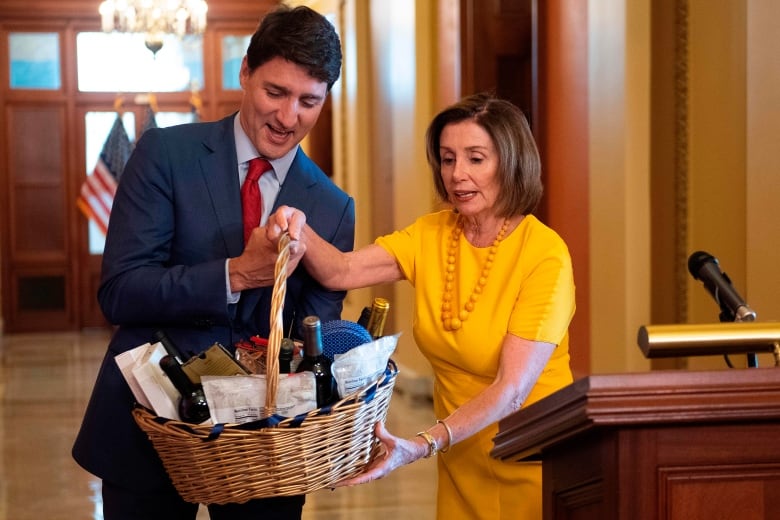 As a consolation prize, Trudeau offered Pelosi some Canadian treats — including candy from the Nova Scotia-based Peace By Chocolate. He made a point of telling the Speaker that the people who started the business were once Syrian refugees and now employ many Canadians.

Trudeau was scheduled to meet with U.S. Senate Majority Leader Mitch McConnell; that meeting was cancelled after McConnell and Pelosi were called into the situation room at the White House to discuss the growing crisis with Iran and the American surveillance drone the Iranians shot down last night.