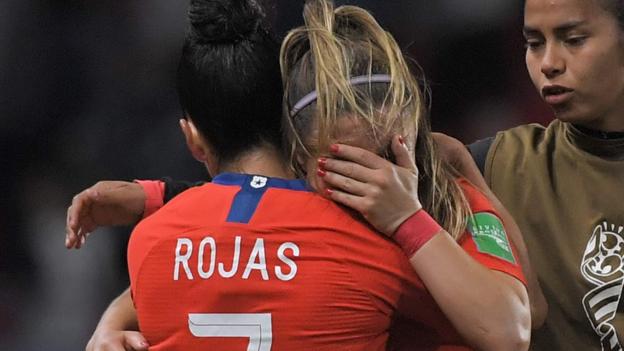 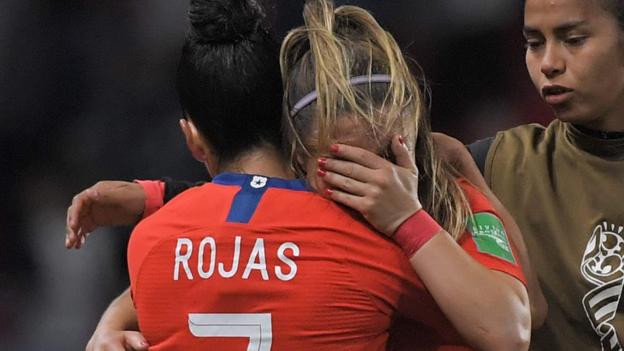 Chile missed out on a Women’s World Cup last-16 tie against England by the width of the woodwork in their dramatic 2-0 win over Thailand.

Needing a three-goal win to advance, Chile were 2-0 up when they were awarded a penalty after keeper Waraporn Boonsing fouled Maria Jose Urrutia.

However, Francisca Lara stepped up and struck her effort against the bar.

They took the lead when Boonsing inadvertently fired into her own net before Urrutia’s header made it 2-0.

At full time there were tears among the Chile players who made history with their first goals in the competition, but ultimately fell short against a side who had conceded a total of 18 goals in their previous two Group F games.

The South Americans had found it difficult in the first half to find a break through but had a lucky break three minutes after the interval when Yanara Aedo’s shot hit the post and went in off Boonsing.

Chile’s hopes of completing their mission grew 10 minutes before the end when Urrutia headed in. They now needed only one goal and were on the brink of a Sunday date with England when they were awarded a penalty.

Sadly for them their dreams were dashed when Urrutia’s firm effort came off the post.

‘From the peak of happiness to the depths of despair’

Chile coach Jose Letelier: “I do feel proud of the effort the players were able to make in this match and up until now.

“Football does create this type of situation whereby from one moment to another you just go through all types of emotions; from the peak of happiness to the depths of despair, that’s what it’s all about.

“We’re totally at peace with all that we did and all of the players that have taken part in the process thus far.”

Thailand coach Nuengrutai Srathongvian: “We have to admit that Chile were better than us today.

“The Women’s World Cup has been a great and important experience for Thailand that we can use to go back and improve the development of Thai football.

“Every team in this group is better than us. We have to share this experience with the younger generation and how they could be better prepared if they want to participate in the World Cup.”