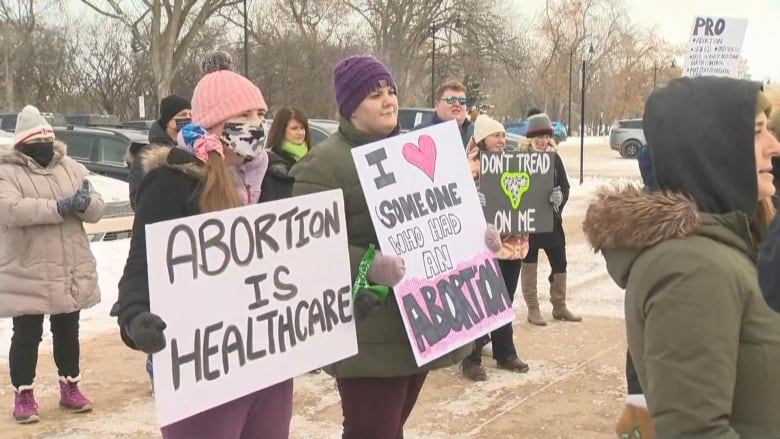 An abortion rights activist was asked to turn her shirt inside out to gain entry to the Saskatchewan Legislature as a visitor Wednesday.

Megan Johnston launched a billboard campaign this summer focused on the phrase Abortion is Health Care.

Johnston’s shirt had the same phrase.

She and abortion rights groups and providers were at the Saskatchewan Legislature on Wednesday as guests of the Opposition to call for the provincial government to improve abortion access.

The groups attended question period inside the legislature.

Johnston said that when she took her coat off after entering the building, security at the front entrance told her she had to change.

“I could not wear my shirt into the building and I had to turn it inside out,” she said. “I was escorted by security to the bathroom to ensure my shirt was turned inside out so that word — I’m assuming ‘abortion’ not ‘health care’ — was not visible in the room.”

CBC reached out to the government for comment and was told it was looking into the issue and would provide a response Thursday.

This fall, a new team took over security inside and outside the building, replacing the sergeant-at-arms and his staff.

Bill 70, passed in the spring, saw the government appoint a security director, leaving the sergeant-at-arms only in charge of security and safety inside the assembly.

The legislative assembly website indicates visitors are not to hold demonstrations inside the building.

“Demonstrations are not permitted within the Legislative Building. No placards, megaphones, or anything that might be used as part of a demonstration may be brought into the building.”

Johnston said her shirt is non-controversial and not a demonstration but a fact.

The groups and the Opposition are asking the provincial government to improve abortion access. They want a provincial intake system created that would provide abortion referrals to all women, no matter where they live in the province.

They also want surgical abortion centres in Prince Albert and Saskatoon, like the one that exists in Regina.

Women in northern Saskatchewan, where there are no abortion clinics, must travel to Saskatoon and find a physician willing to perform a surgical abortion before the cut-off of 14 weeks, much earlier than in other jurisdictions.

“These barriers are real and they exist. It shouldn’t be unpaid volunteers managing this issue. Our government has a responsibility to us as human beings to provide that health care,” Wotherspoon said.

Wotherspoon took issue with a response from Health Minister Paul Merriman, who said it was normal for people to travel from a rural area or smaller community into a large centre to have an abortion.

“This surgery is already available in other communities. It is available. If I were to present at an ER with an ectopic pregnancy or a spontaneous abortion, I would receive what amounts to the same care as I would if I were seeking an elective abortion.”

Wotherspoon said it is not a matter of staff or doctors, but a “choice that our government is making.”

Merriman said the province does not offer other surgeries in “every corner of the province.”

“With any surgical procedure we want to make sure that it is done in an efficient way, and for this specific procedure, it is done in the major centres. We’re not denying access to anybody.”

Merriman said the government removed barriers with the approval of the abortion pill Mifegymiso and the decision to include it in the provincial drug plan in 2019.

He said that this spring, “inconsistencies” around abortion access were raised and the provincial government and Saskatchewan Health Authority are consulting with doctors about the issue.

But abortion rights advocates have pointed out that not all Saskatchewan doctors will prescribe Mifegymiso in Canada, and not all pharmacies will stock or fill a prescription for it.