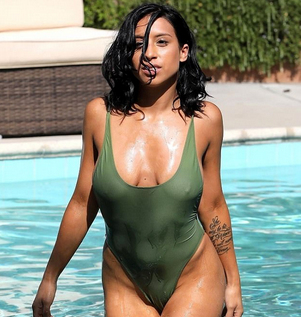 Montia Sabbag, the 26-year-old woman at the center of the Kevin Hart sex tape scandal, has revealed in an interview with Daily Mail TV that she slept with the married comedian three times after she flew with him on a private jet to Las Vegas.

Montia who claims that she didn’t know who Kevin was or his marital status, also revealed that the sex tape being used in the multi million extortion attempt was filmed in Vegas during the day when the comedian was sober and not drunk. Read excerpts from the full interview below.

‘I was intimate with Kevin three times in the course of maybe three days. It was fun. We just get along, we get each other, he’s funny, I’m funnier. We had a connection, we had chemistry. We clicked.

‘It was fun, he didn’t try to woo me, it was just an instant connection.

‘I had a girlfriend who invited me to go with a few of her friends. I was like, “okay, sounds fun”.

I met him (Kevin) on the plane, I was with a friend and we had no idea he was gonna be there. He was with his friends. I thought he was cute, he’s an attractive man, but I wasn’t star struck or anything like that, it was super casual, he was a gentleman, a nice guy.
In Vegas, they all agreed to meet up at the Marquee nightclub at The Cosmopolitan Las Vegas hotel and that’s when Hart zoned in on Sabbag.

She said: ‘We were drinking, having fun, listening to the music, dancing. I was more focused on my friends, I didn’t go there for Kevin.

‘But Kevin did pay me a lot of attention, he was into me, I could tell.’
Later that night, Hart and his entourage invited Montia and her friends up to the star’s luxury hotel suite. The comedian allegedly began to charm her as they instantly felt a ‘connection’ and had ‘chemistry’. They later had sex in Hart’s bedroom off the main suite.

‘We talked about life, you know, what are your dreams your aspirations,’ she said. ‘He was charming, he was funny.’
‘He made me feel comfortable, I don’t remember exactly what happened, it kind of just happened.
‘Yes we were intimate, I did not know he was married but I found out later, I was a little bit upset, confused about it because the way he was acting it didn’t seem like he was married.
‘But I was caught in the moment, he’s an adult.
‘We partied, we drank and we ended up being intimate three times over the course of three days.’
Montia however claims to have never been a big fan of Hart’s films or stand-up routines, so she wasn’t blown away by him.

‘It’s not like it was anything special, I’m a normal person, just cause he’s someone we see on TV doesn’t mean I was wooed, it’s not like that, he’s just a cool guy, chill.’
She revealed that the sex tape was seemingly shot when she had sex with Hart for a second time, not the first. And this was done by a partygoer in the suite.

‘Everybody believed that the video was the night of the nightclub and that we were only intimate once, but it was a completely different day, the second time (we had sex).
‘If you really look at the tape it was during the day, it wasn’t a night thing, he (Kevin) was sober, there was obviously a connection, I’m not just someone he was with at night when he was intoxicated or something, it was more than that.
‘We were all back at the hotel room. There was quite a few people in the suite, it was a social gathering, a party. We hung out, listened to music.
‘Kevin was very public about his affection towards me.
‘We were hugging, kissing, touching and it made me believe he wasn’t married.’
After the trip came to an end, she and Hart parted on good terms. She however denies any involvement in the camerawork and claims she doesn’t recall seeing anyone filming them. When asked if she knows who did and what she thought about his apology video, she responded:

‘I have my suspicions’, adding: ‘But I can’t really discuss that because of an ongoing investigation.

‘I was like, “wow”, but mainly I was confused because I thought he was saying I was the person (who targeted him)

‘I knew I hadn’t done anything wrong and I knew I didn’t do any of the things he said in the video, so I was confused.

‘I want to set the record straight. I’m not a home-wrecker, I’m not an extortionist, I’m not a stripper, a prostitute, I’m just a woman who has dreams and aspirations.’
Her lawyer Bloom said she feels that what the filmmakers behind the sex tape did was ‘disgusting’ and ‘criminal’.

‘I am so proud of Montia, she has really been through hell in the last month, this has really been hard on her, even when she came to me a couple of days ago she was really distraught.

‘I like to think that when a woman stands up for herself and speaks the truth it is very empowering and it’s one of the healthiest things you can do.

‘What I think is important is that Tia was a victim of a crime.
‘She’s an adult, she was with another consenting adult in a hotel room as happens millions of times every day across America.

‘It’s a felony to stick a camera into a room secretly, to record, to disseminate these images and to ask someone for money, those are four different felonies.

‘Montia has bravely decided to stand up for herself and I salute her for that.’
Montia also tearfully denied that she is trying to cash in on her new found fame.

‘I came forward to show that you have to stand up for yourself, when you are being accused of doing something you didn’t do… it hurts, when you have the world calling you things you’re not, it sucks.

‘I usually don’t regret things in my life but I definitely choose when to learn from things. I’ve learned never to mess with married men.

‘If I had known that Kevin was married this would never have happened.’