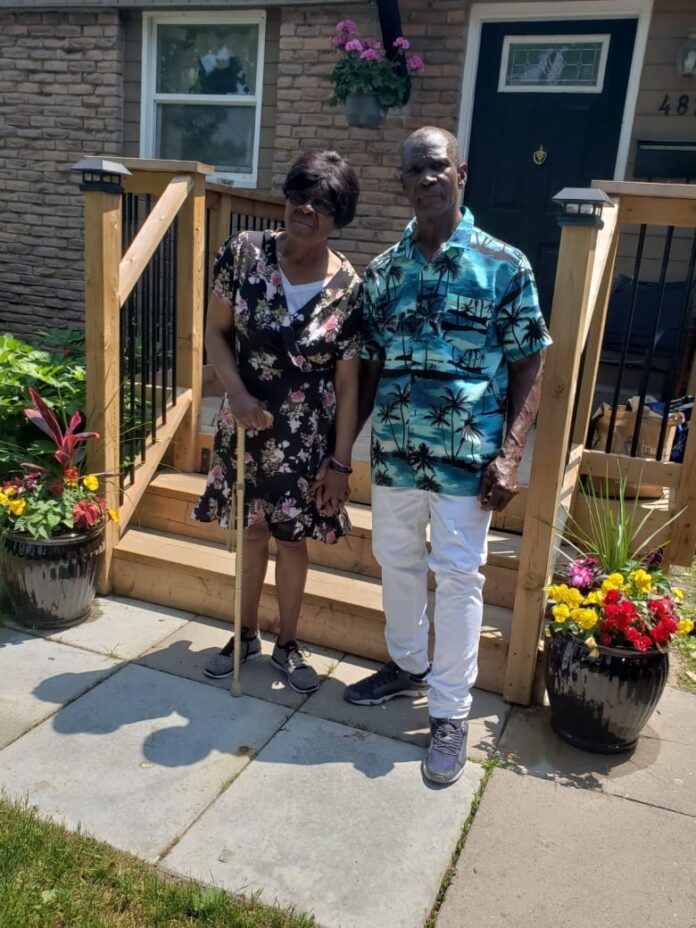 An elderly Black couple are alleging that Durham Regional Police and staff at an Ajax, Ont., hospital, assaulted and abused them during a fall 2018 confrontation, and then tried to suppress video of the incident via threats of arrest and legal action.

Livingston Jeffers accompanied his wife, Pamelia, to the emergency room at Lakeridge Health Ajax Pickering Hospital on the evening of Oct. 30, 2018, because she was vomiting and suffering from insomnia.

But by the wee hours of the morning, both had been admitted to the hospital east of Toronto on mental health grounds, with a bloodied Livingston Jeffers also receiving treatment for cuts and abrasions after a struggle with two police officers that saw him receive a number of blows to the head.

“You see your grandfather arrested, in handcuffs, with trauma to the head, bruises, bleeding—unconscious with his head back on a chair,” said Trequan Jeffers, the couple’s 22-year-old grandson. “This needs to stop. It really needs to stop. My grandparents need justice. We need justice.”

At a socially distanced news conference Monday, the couple’s lawyers released two videos of the melee that occurred just outside the hospital entrance after staff, and then police, tried to stop the couple from leaving the facility.

One, shot on a cellphone by a witness, captures two police officers restraining and punching Jeffers, now 70, as he lay on the rain-soaked tarmac shouting “murder,” while his 69-year-old wife cries and resists the attempts of staff to bring her back inside. A nurse and a security guard are heard warning the witness that filming is illegal because it “violates patient confidentiality.”

WATCH | A video recorded by a witness shows part of the altercation:

Cell phone video captured by a witness shows part of the altercation between two Durham police officers and Livingston Jeffers. 0:33

Corey Rainford, the 22-year-old man who witnessed the beginning of the incident and shot the 33-second video, said that he was shocked by the level of force police used against Livingston Jeffers.

And he and his friend, Kaitlyn Wilson-McLean, told the same story about a hospital staffer and a Durham Police officer later approaching them inside the emergency room and forcing Rainford to delete the video while they watched.

“A police officer and one of the nurses pulled me off to the side, in the … entranceway and threatened that if I’m not going to delete the video in front of them, I’m going to be arrested and charged,” said Rainford.

A “scared” Rainford complied, but had already introduced himself to Trequan Jeffers, who had arrived a few minutes earlier to check on his grandparents, and shared the video with him.

The second video, pieced together from several hospital security cameras, lasts for several minutes. It shows a nurse following the couple outside, where she is quickly joined by a security guard, a doctor and then the Durham officers who were parked at the nearby ambulance bay on an unrelated call.

The video of the confrontation is grainy and shot from a distance, making it impossible to see exactly how things turned physical. But the struggle between Jeffers and the police appears to go on for at least another minute after the cellphone video ends and all but one witness, a nurse, returns inside.

WATCH | Surveillance video from the hospital:

According to a May 2020 report prepared by Ontario’s Office of the Independent Police Review Director (OIPRD), it was during this period that Jeffers put his hand on one of the officer’s guns and tried to remove it from its holster — an act that was witnessed by the nearby nurse.

One of the Durham officers was wearing an active body cam at the time, as part of a pilot project, and the audio apparently captures him warning his partner about the attempt to take his weapon. The second officer reacted by delivering what the report describes as “four elbow strikes” to Jeffers’s head, knocking him unconscious.

The outside investigator, a former York Regional Police officer, cleared both Durham constables of allegations of arrest without cause and excess use of force, ruling that their actions were justified.

One of the constables sustained scratches to his face in the struggle, and Jeffers was arrested on charges of assault and trying to disarm an officer, but the matter was later dropped, in part because the officers failed to read Jeffers his rights.

The lawyers for the couple have asked for, but have yet to receive the body cam video. And the Durham Regional Police Service is refusing to release it to the media.

In a statement issued Monday, the force said it will not comment on the case because of ongoing civil litigation. The Jefferses filed suit last November seeking a total of $1.6 million from the police and hospital — and a newly filed request by the family for a review of the OIPRD decision.

In a statement to CBC News, Lakeridge Health said it will not speak about “individual patient experiences” because of privacy concerns, but that it “strives to provide excellent patient care to all members of our community.”

Faisal Kutty, who represents the Jefferses, said he has serious concerns about the investigative report, noting that neither Rainford, nor Wilson-McLean, were interviewed. (They were apparently contacted in March, but didn’t receive a response to their request to delay a face-to-face meeting over concerns about COVID-19.)

“We don’t think the review was properly done,” he said. “The investigator is actually doing the job of protecting the cops, not really looking for truth and justice. And so that’s why we are now trying to ask for a review.”

The Jefferses themselves did not attend Monday’s news conference. Kutty said that they are still suffering from the psychological fallout of that evening, and were fearful that the police might show up.

At the news conference, Kutty’s co-counsel, Kalim Khan, drew parallels between his clients’ experience and the recent killing of George Floyd in Minnesota, and the violent arrest of Chief Adam Allan by Alberta RCMP in March

Kutty contends that the couple are also victims of systemic racism and implicit bias on the part of the police and the hospital, factors that saw them treated as threats rather than people in need of assistance.

Told they could go home for night

No one, Kutty said, disputes that a doctor told the Jefferses that it was all right for them to go home for the night and return the next day — unaware that one of his colleagues was about to start preparing the paperwork to have Pamelia Jeffers assessed on mental health grounds.

Livingston Jeffers had a previous run-in with police. In 2007, he was convicted for mischief and counselling murder with regards to a series of difficult-to-decipher posters that he put up around Scarborough after losing his condominium in a bank foreclosure. The verdict was later unanimously overturned by the Ontario Court of Appeal.

“What we need to know, what we need to decide as a society is — even if somebody is mentally ill, is this how you treat them?” Kutty said. “You take them down violently, when according to the witness, they were leaving?”

He said the Jefferses, in addition to the compensation, are seeking an apology from the police and hospital and a promise of change. They also want to see mandatory training on de-escalating disputes and confrontations.

“When somebody is allegedly suffering from mental health issues, they owe [them] an additional, extra duty of care to treat them with compassion,” said Kutty.