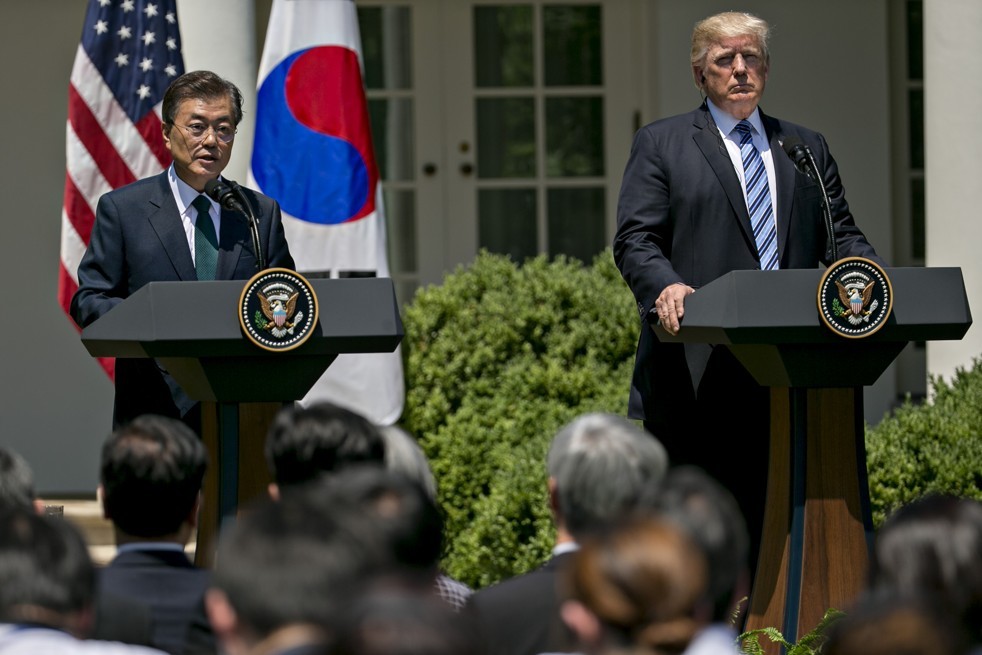 President Trump on Friday denounced the “reckless and brutal” regime in North Korea and demanded that Pyongyang choose “a better path” to de-escalate tensions on the Korean Peninsula over its nuclear weapons program.

Appearing in the Rose Garden with new South Korean President Moon Jae-in, Trump pledged a “determined response” to the threat and renewed calls for regional allies and powers to implement stronger economic sanctions on Pyongyang, a day after his administration sanctioned a Chinese bank over allegations that it laundered money for North Korean companies.

The show of solidarity between the leaders of two allied nations comes after Moon swept to power in the wake of the resignation of his predecessor, Park Geun-hye, who was undone by a financial scandal. Moon had campaigned on a platform of greater engagement with North Korean dictator Kim Jong Un, whose bellicose rhetoric and ballistic missile tests have drawn rebukes from the White House. Moon also has questioned the need for the U.S.-backed THAAD missile defense system being installed on the peninsula that has been opposed by China and Pyongyang.

Trump and Moon, who met for a working dinner Thursday and follow-up meetings Friday, touted a warm personal relationship, but Trump made clear that he had demands for Seoul, including the renegotiation of a bilateral trade deal, negotiated by the administrations of George W. Bush and Barack Obama and ratified by Congress in 2011.

“We talked last night and today about some tough trade issues like autos and steel,” Trump said. “I was encouraged by President Moon’s assurances that he is working to create a level playing field so American workers and businesses and especially automakers have a fair shake.”

Neither president offered a specific path forward on dealing with North Korea.

“We must employ sanctions and dialogue in a phased-in and comprehensive approach,” Moon said. The denuclearization of the peninsula “must be resolved without fail. North Korea should by no means underestimate the firm commitment by South Korea and the United States in this regard.”

Reporters baked in the 84-degree sun as they waited more than an hour for the event to begin. Unlike the president’s announcement on the Paris agreement, when the garden was packed with reporters, this Friday-before-a-holiday-weekend event had dozens of open seats.

Trump did not answer questions yelled out by reporters, including whether he would apologize for a tweet he posted Thursday that disparaged morning television host Mika Brzezinski.

[Mika Brzezinski explains what President Trump’s tweets reveal about him]