With nowhere to skate in this Nunavut town, residents cleared the sea ice to make a rink 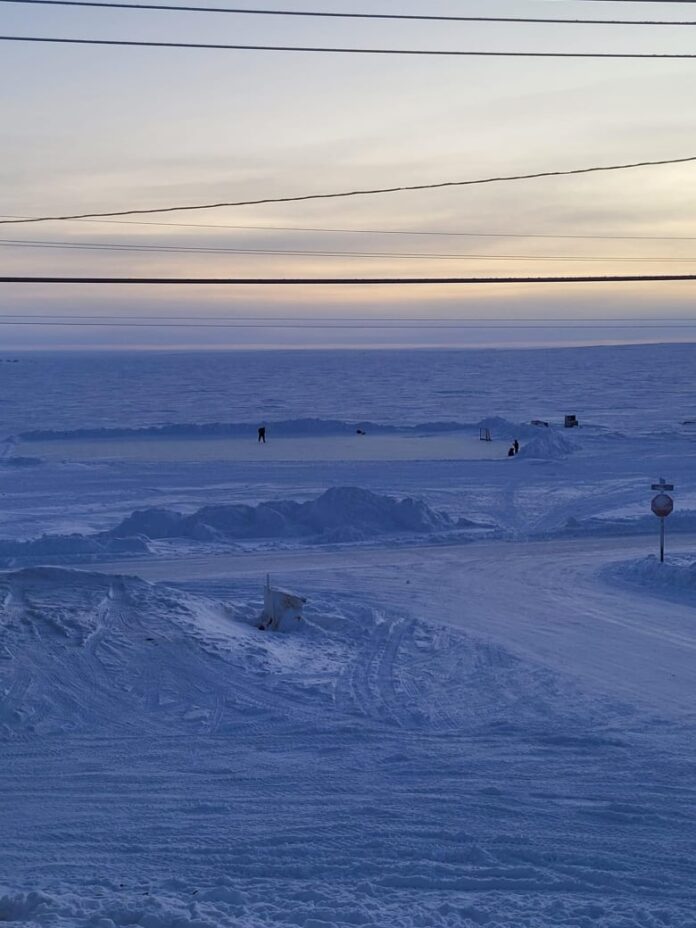 There might not be an available arena in Cambridge Bay, Nunavut, right now, but the community isn’t without a rink this winter, thanks to some helpful residents.

Keith Lear started plowing out a rink on the sea ice in front of the community, inspired by another resident, Naikak Hakongak, who has been shovelling out a place to skate in recent years.

Lear, who owns the local hardware store, and a Bobcat, decided to help out with clearing the makeshift rink on sea ice

“[Hakongak] made a fairly good-sized rink, but then we had blowing snow here so I decided to go down there and help him out and use the Bobcat that we have and made the rink really big,” Lear said.

“So it’s there for families and community members and kids to enjoy.”

The community of about 1,800 lies on the western entrance to the Northwest Passage. Right now, Lear said the makeshift skating rink is the only way for residents to go skating.

“The old arena is not even being used. So really, kids have nowhere to go skate and, and play hockey like they have in the past,” Lear said.

“At least it gets them out and hopefully out playing and enjoying the cold temperatures.”

Lear said he’s seen as many as 10 kids at a time on the sea ice rink so far. He said, as the days get longer, use of the rink will only increase.

“I’m sure as the days get brighter, there’s gonna be more and more kids out skating around on the ocean.”

If there’s a blizzard or storm, Lear said they’ll go back out to clear the make-shift rink.

“We’ve kind of pushed the snow in a way that it will protect the rink from blowing snow, but every time there is snow or anything, we’ll go down with our Bobcat and clear it out and make sure it’s usable,” Lear said.

Cambridge Bay’s old arena complex was closed in 2018, according to Hala Duale, a spokesperson from Nunavut’s department of community and government services, in an email. That was due to air quality concerns from mould throughout the building.

The territory issued a remediation contract in the fall of 2018, Duale said, the work of which was finished in February 2019. The arena was opened to the public “briefly,” in the spring of 2019, and then again in the following years up to 2021, she said.

Duale said the department can’t comment on the 2022-2023 closure “as the arena is operated and maintained by the municipality of Cambridge Bay.”

Jim MacEachern, the hamlet’s chief administrative officer, said some closures were due to COVID-19. He said while there was “significant” remediation done in 2019 on the old arena to fix the mould issues, there still remains a mould problem, along with structural issues.

He said right now there is consulting being done to test the air quality, and to see if it’s possible to have the arena functioning for “at least” the rest of the season.

A contract to build a new arena was set into motion on March 25, 2020 when the department and the municipality entered into a $4.2 million agreement. Duale said it was the responsibility of the municipality to manage and complete the project.

However, in February 2022, the municipality asked for further funding to complete the project. Duale said “due to the size of the request,” it’s still under review by the department. She didn’t say how much the hamlet asked for.

MacEachern said he doesn’t know how much money the hamlet asked for, but said that those funds would go toward installation of materials and the finishing touches. He said the costs for the project went up in part due to the pandemic.

The “shell” of the building is in place, he said, and materials for things like the ice-making equipment, the bleachers, and all of the interior furnishings are in the hamlet.

“I’ve been in constant communication with the [Government of Nunavut] and with the federal departments, they are trying to assist. It’s just something that wasn’t allotted for in the GN budgets. And so hopefully in the new fiscal year, we’ll be able to allocate funding towards it,” he said.

“I don’t anticipate many delays once the funding is in place.”

MacEachern said he’s aware “there’s a definitely” a feeling of frustration among residents.

“That’s very understandable. An ice rink in a community the size of Cambridge Bay is very important. So getting the funding in place to to finish the project is is essential,” he said. “It’s top of our priority list.”