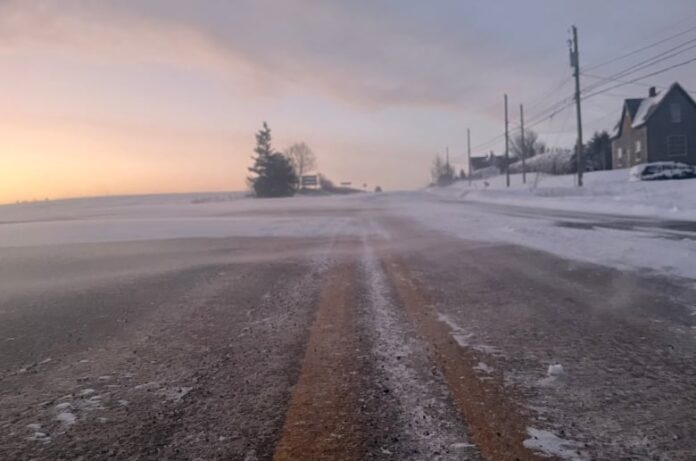 A winter storm that hit P.E.I. Tuesday is forecast to move off the Island this morning, but it’s tapped the power grid in West Prince in its dying hours.

At 9:45 a.m. Maritime Electric was reporting more than 1,000 customers without power, with the largest concentration of outages in the Alberton area.

Schools are closed and many offices are delaying opening, but a winter storm that hit P.E.I. Tuesday is expected to wind down over the course of today.

Winter storm warnings remain in effect for all three counties.

Schools in the Public Schools Branch and French Language School Board are closed for the day. Provincial civil service and Service Canada offices are delaying opening until 10:30 a.m. Holland College and UPEI are also delaying opening until noon, with the exception of the West Prince campus of Holland College, which is dealing with a power outage.

The bulk of the snow has fallen, with just another few centimetres expected, but the winds remain high with gusts up to 90 km/h possible. That is creating blowing snow and hazardous conditions on the roads.

How much snow is coming will depend on where you are.

“About two to five centimetres on top of what we already have, however for Prince County it’s closer to five to 10 centimetres,” said CBC meteorologist Tina Simpkin.

“Just looking at the radar there are some bands of heavier snow going on so pockets of heavier amounts certainly not out of the question.”

Some plows are being taken off the roads in parts of Prince and Queens counties because of whiteouts.

Conditions aren’t expected to improve until around 9 a.m. at the earliest. Plow dispatchers are saying if you don’t have to go anywhere, don’t, and if you do drive slowly.

An associated special weather statement says water levels along the shore will be higher than normal, with pounding surf on north- and east-facing shores. That will persist until midday.

Late Tuesday evening about 700 Maritime Electric customers were without power, but by morning the utility’s outage map was showing only one without electricity.

There have been some flight cancellations at Charlottetown Airport, but traffic is running normally on Confederation Bridge. The first two sailings of Northumberland Ferries are cancelled.

Winds are forecast to ease somewhat around 8 a.m., and become light under sunshine by mid-afternoon.