Will Obasanjo and Buhari will never be cool friends again? 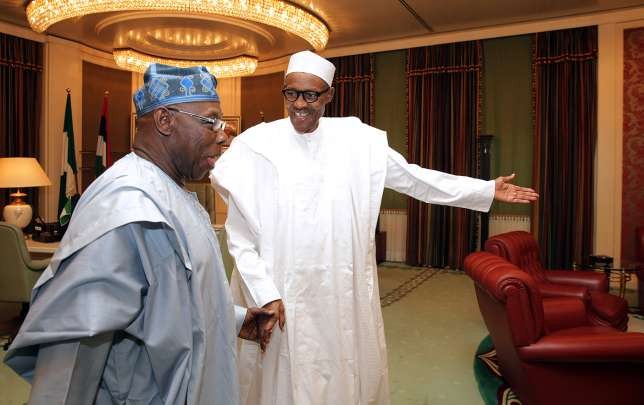 Will Obasanjo and Buhari will never be cool friends again?

Obasanjo and Buhari were once friends. It’s now safe to say they are sworn enemies.

Chief Olusegun Obasanjo and President Muhammadu Buhari have a relationship that you really can’t understand, hard as you may try.

One minute, they are photographed sharing a laugh, the next, a bitter letter has gone out from one of the parties.

One minute, Obasanjo is in Buhari’s office for a continental assignment, the next minute he’s calling Buhari a failure.

Not even Tom and Jerry had us this confounded.

Actually, Obasanjo and Buhari used to be cool.

Both men played huge roles in weaving Nigeria’s sorry history after independence. Buhari was military president in the ‘80s; just a few months after Obasanjo handed over the reins of power to an irredeemably flawed Shehu Shagari.

As young army officers back in the day, they rolled in similar circles, dined in the same restaurants and probably eyed the same women.

play Buhari, Obasanjo and Abubakar may laugh in public all they want, but we can’t be fooled no more (Bahar Ahmad/Twitter)

When Obasanjo returned as civilian president in 1999, one of his first tasks was to disband the Petroleum Trust Fund (PTF) which Buhari had overseen from 1994 to 1999. Was this where trouble started for both men? Was this the point where it went downhill? No one is quite certain.

Interestingly, Buhari sought Obasanjo’s blessings in the run up to the 2015 election after Obasanjo had fallen out with the Goodluck Jonathan he helped enthrone.

Obasanjo was a regular guest at Aso Rock in the early days of the Buhari administration and everyone thought they were really chummy until the morning of January 23, 2018 when Obasanjo wrote this very long letter to Buhari, proclaiming the president a failure and a man who is so blinded by ethnic loyalties, Nigeria’s problems have grown worse on his watch.

And then ‘Baba Iyabo’ asked Buhari not to seek reelection in 2019 because he has nothing more to offer.

“Whatever may be the state of President Buhari’s health today, he should neither over-push his luck nor over-tax the patience and tolerance of Nigerians for him, no matter what his self-serving, so-called advisers, who would claim that they love him more than God loves him and that without him, there would be no Nigeria, say.

“President Buhari needs a dignified and honourable dismount from the horse. He needs to have time to reflect, refurbish physically and recoup and after appropriate rest, once again, join the stock of Nigerian leaders whose experience, influence, wisdom and outreach can be deployed on the side line for the good of the country”, Obasanjo wrote.

After that public letter to Buhari which immediately went viral, both men met in Ethiopia, shared a laugh and posed for photographs in each other’s arms and everyone thought they had buried the hatchet for good and were cool again.

Obasanjo has pounced on every opportunity to have a go at Buhari since his January letter, you have a feeling he just can’t wait for Buhari to make a mistake (and mistakes are a daily staple for the Buhari administration these days).

The former president doesn’t go a week without hurling stones at Buhari, you have to admit he considers it a pastime.

After Buhari referred to Obasanjo’s January letter as “abusive” and “insulting”, Obasanjo came for him again, restating his position that the president is so clueless, US President Donald Trump now orders him around.

“The mediocre performance of Buhari cannot be described by anybody as ‘superlative’ even by morons”,  Obasanjo said in a statement released by his spokesperson.

Obasanjo wasn’t impressed with Buhari’s performance in the U.S either: “President Buhari again bungled another opportunity to self-redeem. No wonder President Trump ordered him in a rather condescending manner to go back home and stop the killings going on in Nigeria!” Obasanjo fired, before adding that Buhari is painfully “incompetent”.

At this point, you have to agree that there’s no way back for the friendship Obasanjo and Buhari once shared. They can’t even fool us anymore. They don’t love themselves. They are done with each other. Their friendship hasn’t just hit the rocks, it has smashed the valley.

As the 2019 election draws ever so close, expect Obasanjo to keep having a go at Buhari at every opportunity. And should Buhari nail re-election, Obasanjo will have an apoplexy and go after Buhari with renewed vengeance like his life depends on it.

They can’t even pretend that they love themselves anymore. We can see right through them. They just can’t stand each other.