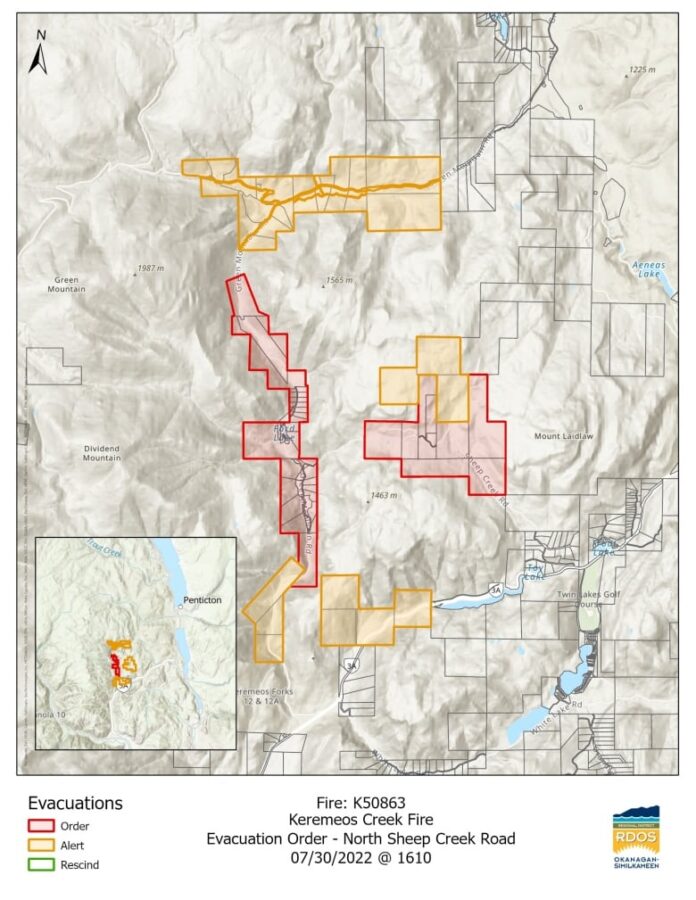 A wildfire burning southwest of Penticton, B.C., more than tripled in size in a day, according to officials Saturday evening.

The Keremeos Creek wildfire, which was sparked Friday, has grown to 4.3 square kilometres as of 6 p.m. PT, B.C.’s wildfire service said.

Residents of four more properties have been ordered to leave their homes.

“Today the wildfire displayed aggressive and erratic fire behaviour,” the service said in a tweet just before 6 p.m.

The new evacuation orders came after officials announced at least one structure has been destroyed. The fire is burning 21 kilometres southwest of Penticton.

Twenty-five properties are under evacuation order and the Penticton Indian Band has activated its emergency operations centre.

B.C.’s wildfire service categorizes the blaze as an interface fire, meaning it has the “potential to involve buildings,” in addition to burning areas of forest or other vegetation.

The destroyed structure was described as a small non-residential building by Erick Thompson, communications coordinator with the Regional District of Okanagan-Similkameen (RDOS), during a livestreamed emergency briefing Saturday afternoon.

“If you haven’t yet, if you’re under evacuation order or alert, you should register with our emergency support services,” he said.

Thompson said it’s been difficult to find rooms for evacuees, given the fire broke just before a long weekend.

“We understand that there is very little in the way right now of available accommodations in the Okanagan region for obvious reasons, very popular in the summer, very challenging to find a place,” he said.

The blaze, which started Friday, is among a large number of fires that were sparked across the province after a week of extreme temperatures. Of B.C.’s 73 active wildfires, 46 were started in the last two days.

The fire near Penticton is now burning across an area of 1.5 square kilometres, up 50 per cent from Friday night. Most of the growth was seen after the fire jumped east across Green Mountain Road, according to the B.C. Wildfire Service.

The cause of the fire hasn’t yet been determined.

Earlier Saturday, wildfire officials said the weather would continue to impact operations. A smoky skies bulletin has been issued for the region.

“We are going to continue to see hot and dry conditions throughout the next few days as this wildfire unfolds,” said Aydan Coray, a fire information officer. “While the fuels have been dry, they will continue to dry out as we see [relative humidity] decrease even further, and the hot and dry weather continues.”

Coray said it’s difficult to forecast where the fire will grow, and whether it will move toward Penticton, given how volatile the situation is.

“We are witnessing some pretty erratic fire behaviour due to shifting winds,” said Kaitlin Baskerville, manager of the Kamloops Fire Centre. “We’re now doing planning to anticipate growth that could go east, west, north, south given the erratic behaviour that we’re witnessing.”

Fire near Lytton continues to burn

The Keremeos Creek wildfire is the second “fire of note” in B.C., which means it is particularly visible or poses a threat to public safety.

The first one of the season, the Nohomin Creek fire northwest of Lytton, continues to burn over an area of 29.1 square kilometres after it started on July 14. Lytton was all but destroyed by a raging wildfire a little over a year ago.

The Nohomin Creek fire has resulted in nearly 100 people being ordered to leave their homes, and at least 10 structures being destroyed. Some of the evacuation orders issued by local authorities have been downgraded, but many remain in place as of Saturday.

Karley Desrosiers, a fire information officer, said significant growth isn’t anticipated for the fire due to suppression efforts, but fire activity is still being seen in the northwest flank of the blaze.

“We are seeing an expected decrease in the humidity today [Saturday] compared to yesterday,” she said. “That will likely influence fire behaviour and it might be burning more active than yesterday, but that’s not unexpected.”

The fire has also resulted in the closure of the nearby Stein Valley Nlaka’pamux Heritage Park. Without a sustained cooling trend, Desrosiers says the fire is likely to continue burning.

“I would say the biggest challenge at the moment, here and elsewhere, is the heat,” she said.

According to the wildfire service, the province saw nearly 4,000 lightning strikes over the last two days, a majority of which were in the Interior.

Currently, 45 per cent of B.C.’s wildfires this season were started by lightning, with 48 per cent due to human activity. Most of the province is at a “high” fire danger rating as of Saturday.

While open fire bans are in place throughout the province, small campfires are still permitted, which means keeping fires under half a metre high and wide, and keeping water or a tool close by to keep them under control.

Fire information officer Jean Strong said Friday it is unusual to not have a campfire ban in place this late into the summer. Fire centres are monitoring the situation closely, Strong said, and a ban could be put in place if conditions change in the coming weeks.