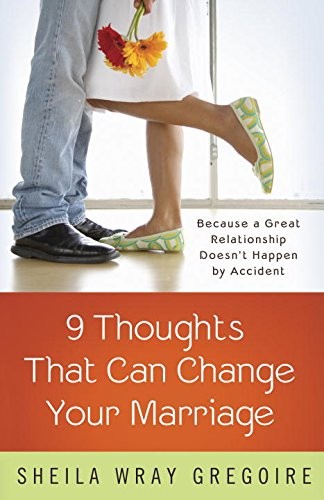 What’s the secret to a happy marriage?

Today’s Wednesday, the day when I always talk marriage (though, to be honest, I talk about it on most other days, too!). I’ve written over 500 Wifey Wednesday posts now, hoping desperately to help you all grow great relationships.

Keith and I truly do have a happy marriage, and I feel like we don’t work at it that much. It’s just kind of evolved, after years of making good little choices, which do add up. And we’ve confronted and dealt with some pretty huge things so they didn’t snowball.

But at the same time, I’m getting paranoid for so many people around me.

This week someone we love a lot phoned my husband and said, “Hey, can I stop by and talk to you guys?”

That sounds innocuous enough, but I went into full panic mode. I was just getting ready to make dinner, and as I was chopping up vegetables all of these scenarios were going through my head. Keith was sure it was cancer. I was sure that the guy was going to tell us he and his wife had decided to split.

You see, we’ve had quite a few conversations about cancer and divorce lately with people that started with that phone call–“hey, can I just talk to you guys for a bit?”

For the next twenty minutes I was mourning the loss of his wife in my life. I was picturing what life would be without her, and realizing how much I really valued both of them. I got all teary.

And then he got here. Turns out he was working in our home town for the day and thought, “Hey, I’d love to see Keith and Sheila. I’ll see if I can just drop by after work.” That’s it. So we had a good laugh about it and chatted for a bit and then he went home to his (very happy and healthy) wife.

I’ve had a lot of divorces in my circles in the last little bit, and I’m watching so much pain. Much of that pain isn’t being felt by the people getting divorced themselves (though some is). A lot of it is felt by the kids. My friends and family all have kids similar ages to my own (20 & 22), so when divorce hits, it affects these kids just as their lives are beginning.

Katie is home for a few days, and we were talking late last night about all of this. (The only time I stay up late is when my kids are home; I like to snatch all the conversation I can!). I said to her, “I just want to believe that I’m helping some people avoid pain somewhere, because it sometimes seems like those close to me are all hurting, and I wish I could have done more.”

I wonder, in so many marriages, what would have happened if I had intervened earlier (and that, by the way, is why I’m a huge advocate of marriage mentorship programs at churches done well. Here’s what I think a marriage ministry should look like).

I can’t intervene in those marriages. But I know what I would say.

Two years ago 9 Thoughts That Can Change Your Marriage was published.

And that book really does contain the secret to a happy marriage–learning to think differently about marriage, realizing that it’s not about making the marriage strong or about making you happy. It’s about honouring God and doing what’s right.

That may sound trite, but hear me out. When we focus on having a good marriage, too often we make marriage our idol. We start judging our own performance as a wife, and invariably his as a husband, which is a recipe for disaster already. But we also may be afraid to confront real issues because we don’t want to rock the boat and endanger the marriage. So instead things fester, for years, until suddenly they blow up, right when your kids are in their twenties.

The other danger is that we focus on our own happiness and feelings. Last night I received a comment on this blog from a heartbroken woman who married a guy with a sexual past. On his wedding night, he called her the name of one of his former sexual partners (what a terrible thing to do!). But that hurt has haunted the marriage. She hasn’t been able to move on. Sex is over. And twenty years later they’re miserable.

When we focus on our feelings, we often end up miserable.

But when we focus on God–what does God want in this situation?–things are often clarified. It’s clear how healing happens, what humility will look like, and what rebuilding trust and offering forgiveness will look like.

God can do amazing things to transform marriages, and I know that this is what He wants.

He is the author of the ministry of reconciliation, after all! And in 9 Thoughts That Can Change Your Marriage, I show you such practical tips on how you can do small things that can change your entire attitude. But I also show you how you can do big things and address those huge issues in your marriage. But it all starts by learning to be GOOD, by focusing on what is right, rather than by being NICE and by being HAPPY. It’s a whole different emphasis.

When the book launched, I ran a contest where people who bought it could win dinner with me, somewhere in the U.S.! My winner lived in Georgia, and I took she and a friend out to dinner a while ago. She had read all of my books, including the sex ones, and loved them (that’s why she was so eager to buy my new one). But this one, she said, was the best. It was the most profound. And it was what so many other marriage books are lacking.

I know many of you who read the blog haven’t actually read it, and I just want to encourage you to pick it up today.

As I was saying to Katie last night, I just hope that something I’m doing is reducing the pain in the world, because we’re seeing far too much of it up close and personal right now. This book is my honest and heartfelt attempt to help people overcome pain and truly grow their marriages!

And I have something special for you: I’ve created a FREE video course to go along with the book.

The videos aren’t too long–most are around the 10 minute mark. And then there are discussion questions and personal challenges and so much more! And it’s all FREE.

A FREE video-based study that can transform your marriage–from author Sheila Wray Gregoire:Click To Tweet

If you’re starting a women’s Bible study in the fall, and you’re wondering what to study, this book can change your life!

And if you don’t belong to a women’s Bible study, what about just asking some friends to get together and do the study with you? Watch the videos ahead of time and then meet at a Starbucks to talk, or have people in to your house and have a great time there. It doesn’t have to be all formal, with a church. It can just be a bunch of friends, getting together, and talking about things that matter.

If you’re tired of feeling like your marriage is good, but not good enough…

Then this study is for you!

I hope that some of what I have said has helped you avoid pain.

I really am feeling like there’s way too much pain in the world! And I know that 9 Thoughts That Can Change Your Marriage will get you on the road to a great marriage! So take a look at the book, and think about starting a study this fall. And if you do–send me some pictures! I’d love to see them. ?

Do you find yourself overwhelmed that so many friends and family are going through so much pain? Or have you read 9 Thoughts or something else on this blog that has helped you get over pain? Let’s talk about it in the comments!