Why winter exercise can be especially hard on the lungs 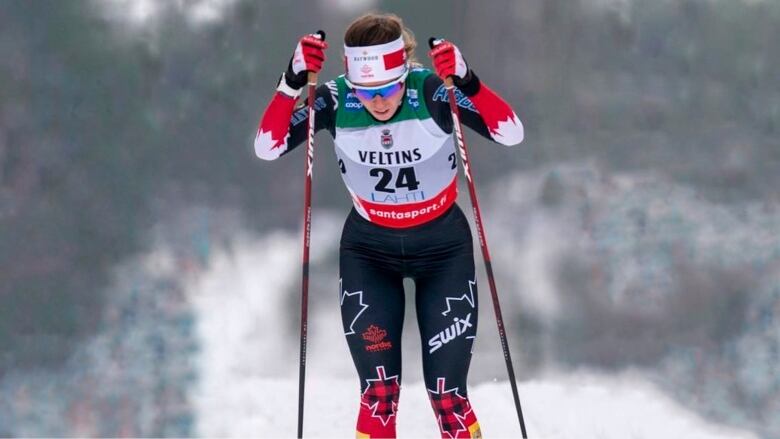 Canadian Olympic hopeful Katherine Stewart-Jones can’t remember when she first started experiencing a cough she and other cross-country skiers call “race hack,” but she said it was probably when she started competing in her early teen years.

“Sometimes, it goes like all the way into your back … it’s just this burning sensation,” she said. “I’ll lean over and just don’t want to get up for a while because it hurts.

“Generally, I’ll get a race hack pretty much every race I do, but for sure, if it’s cold out, it’s affected me a bit more.”

The 25-year-old skier from Chelsea, Que., says she slows down on cold days when she’s training but on race days, she pushes herself hard, sometimes so hard it can take weeks for the post-race coughing to subside.

“It would be interesting to do some more research on it … Like, are we ruining our lungs for the rest of our lives?”

Michael Kennedy, an associate professor in kinesiology at the University of Alberta in Edmonton, has been interested in the effects of cold weather on lungs for more than a decade.

His curiosity comes from working as a wax technician for Canadian elite cross-country skiers in the early- to mid-2000s while he was still getting his PhD. He travelled with teams for months and noticed how breathing issues would worsen as the ski season wore on.

“By the time you got to national or the spring season races in March, they were hacking all the time, so they basically had chronic cough,” he said. “It’s not healthy to have chronic cough.”

The condition for some can lead to problems such as interrupted sleep or speech, and yet, a chronic cough is sometimes normalized in Canadian cross-country ski culture, he said.

Kennedy’s last study on cold-weather exercise, published in 2019 in the journal Respiratory Physiology & Neurobiology, looked at the effects of running a five-kilometre race outdoors in –15 C weather on 16 physically fit men and women compared to a lab-controlled test. All the participants exercised regularly in the cold, whether it was running outside, cross-country skiing or ski mountaineering.

All participants reported having some type of respiratory symptom after running in the cold (most said they had a cough), and breathing tests revealed that nine out of the 16 showed symptoms of bronchoconstriction, or narrowing of the airways, consistent with levels that would be considered exercise-induced asthma.

What happens to lungs in the cold

A main issue with exercising in the cold, especially in temperatures –15 C and colder, is the lack of moisture in the air.

When dry air hits the lungs, especially when someone is breathing heavily, it can provoke the lungs to react as if they were under threat. The airways essentially constrict to protect themselves.

Kennedy has compared the effects of room temperature dry air against cold dry air, and his findings suggest that dry air that’s also cold can provoke even more of a reaction, which may explain why chronic cough is so common among winter athletes, he said.

Some research from around the world is beginning to suggest people who spend years exercising in cold, dry conditions might become more sensitive to lung irritants over time, according to Kennedy, although he cautions more data in this area is still needed.

“Over time, if you repeat that irritation or that provocation, the lung just becomes less capable of healing itself,” said Kennedy.

Ways to protect your lungs

Gordon Giesbrecht, the director of the Laboratory for Exercise and Environmental Medicine at the University of Manitoba in Winnipeg, agrees the cold, dry air can be an issue for anyone who engages in heavy cardiovascular activity on a regular basis in the winter. He likens the experience of lung constriction to trying to take a deep breath through an ever-narrowing straw.

“You can’t freeze your lungs,” he said. “You’re not going to cause any damage although it is possible that continuous long-term training in the cold actually does make you more susceptible to this (bronchoconstriction).”

Both Giesbrecht and Kennedy say a simple face covering, such as a fabric mask, neck warmer or scarf, can go a long way to protecting the lungs from being irritated.

“If you cover your mouth, you’re essentially warming the air and humidifying the air in a very productive manner,” said Kennedy. “So essentially, your lung has to deal with less cold, dry air.”

He also suggests that athletes take time to warm up before they exercise and take it easy on very cold days by slowing down their pace.

He hopes his work helps to change the culture of winter sport in Canada so that athletes take steps to prevent symptoms such as chronic cough, lung pain and wheezing.

“One of the things I want to do in the next 10 years is try to prevent some of this acute disfunction from happening by improving the behaviours of younger skiers or winter sports athletes,” Kennedy said.

Later this month, he plans to begin his next study — a survey of cross-country skiers and biathlon athletes asking them to elaborate on any respiratory symptoms they have so researchers have a better sense of the scope of the issue. He plans to expand the study to winter runners and other recreational athletes as well.

For now, Stewart-Jones brushes off the concerns about cold-weather exercise on her breathing. No serious athlete, including herself, would turn down a race because it’s –18C, she said. As far as face coverings go, she wears them if her skin is at risk of freezing but she avoids them otherwise — neck warmers, like masks, can make it slightly more difficult to breathe.

“I guess it’s so normal and common for people to have irritated lungs that it’s not something I think about,” she said between a couple, short bursts of coughing after competing in Oberstdorf, Germany, at the World Championships in late February.

“For sure it feels like it’s probably not great for my lungs long term.”