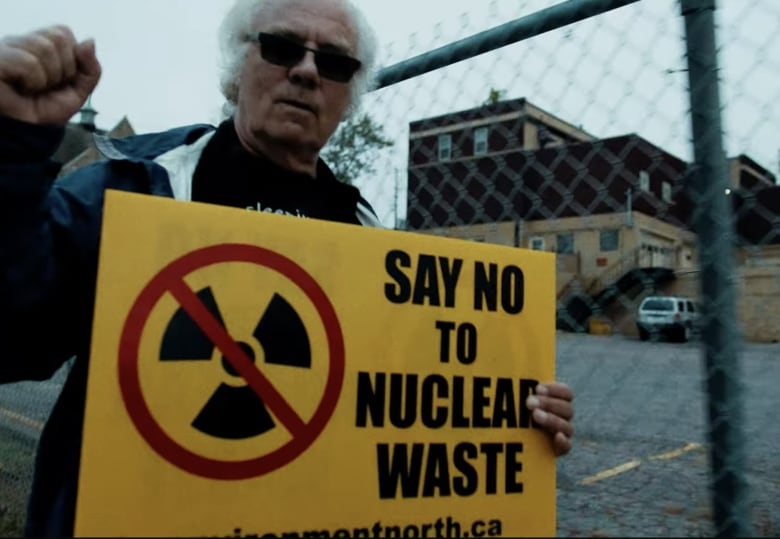 What’s old is new again in the debate around whether to store nuclear waste in northwestern Ontario.

In 1979, when Atomic Energy of Canada was consulting on its plan to bury nuclear waste near Atikokan,  Thunder Bay folk singer Rodney Brown’s gave a five-minute deputation expressing his opposition to the plan.

That deputation was a performance of his new song, Freight Train Derailed.

And Rodney Brown is re-releasing Freight Train Derailed, this time with a new music video, to protest the project.

The plan is for a $23-billion nuclear disposal site where the nuclear waste management organization wants to inter some three million spent nuclear fuel bundles in a sprawling network of tunnels and holes 500 metres below the ground.

The controversial project is nearing the end of a years-long consultation project with communities and First Nations about whether they are willing to host the site either near Ignace or South Bruce, near London, Ont. Organization officials have said they welcome public discourse and debate, while promising a safe solution in line with international best practices.

People in Ignace are concerned about the long-term environmental and health effects of the project, but others note that it could bring back jobs and business in the economically-depressed town.

Amid that backdrop, Brown felt the time was right to bring back his protest song.

“The nuclear industry now, it’s not the same kind of panel I saw in ’79,” Brown said. “Now it’s a marketing company.”

Brown originally wrote Freight Train Derailed for a play. Though the theatre troupe didn’t end up using the song, its theme struck a nerve. Then, just months after Brown’s deputation, a train carrying chlorine gas and other chemicals derailed in Mississauga. The accident caused an evacuation that affected 200,000 people.

The seeming increase in rail accidents was wind in the sails of Thunder Bay’s anti-nuclear movement.

Brown drove from Thunder Bay to Atikokan to demonstrate against burying the waste in the area. When he arrived, he found mass unemployment due to the recent closure of the Steep Rock Iron Mines.

“The Atikokan people weren’t excited about [nuclear waste] either,” Brown recalls. “But there were so many jobs lost there and everybody was desperate. They needed jobs and I’m sure it’s the same kind of thing now going on in Ignace. Everybody’s looking at money and jobs.”

WATCH | Check out the music video for Freight Train Derailed

An old ally from that movement who now works with the advocacy group Environment North offered to pay for Brown to shoot a music video so Freight Train Derailed could once again bring attention to the cause.

Brown always felt the song needed a third verse so he added lyrics about the Mississauga crash, the Lac-Megantic crude oil train explosion in 2013, and the dangers of transporting nuclear waste.

The videographer introduced him to music engineer Ryan MacDonald, to re-record the song. MacDonald is also the leader of the Honest Heart Collective, a Thunder Bay-based rock band whose latest songs are charting in Italy.

The pair agreed to combine their bands and re-record the song as an inter-generational collaboration.

MacDonald doesn’t identify as an activist. He grew up in the 1990s when Brown was best known as a children’s performer and MacDonald can still recite the school song that Brown wrote and would perform when he visited to teach music.

“Rodney was one of — if not the first — musician who inspired me to play music,” MacDonald says. “It was a big full-circle moment for me, working in the recording studio that I built with my friends in the Honest Heart Collective, to be recording the guy that got me into wanting to record music in the first place.”

For Brown, the experience has opened his eyes to a new generation that is making, teaching, and recording music in Thunder Bay’s north core. Brown notes how MacDonald is the same age as he was when he wrote Freight Train Derailed.

And while Brown marvels at new technology that has made quality recording affordable for independent artists to reach wider audiences, Brown laments that political progress hasn’t turned out to be so linear.

He notes that political activism goes far back in history, from the labour movement of the last 150 years, even back to the French Revolution in the 18th century.

“The older you get the more you see how things go in circles,” Brown said. “When I was involved in all this stuff, I thought we were on new ground, new territory, but we weren’t.”