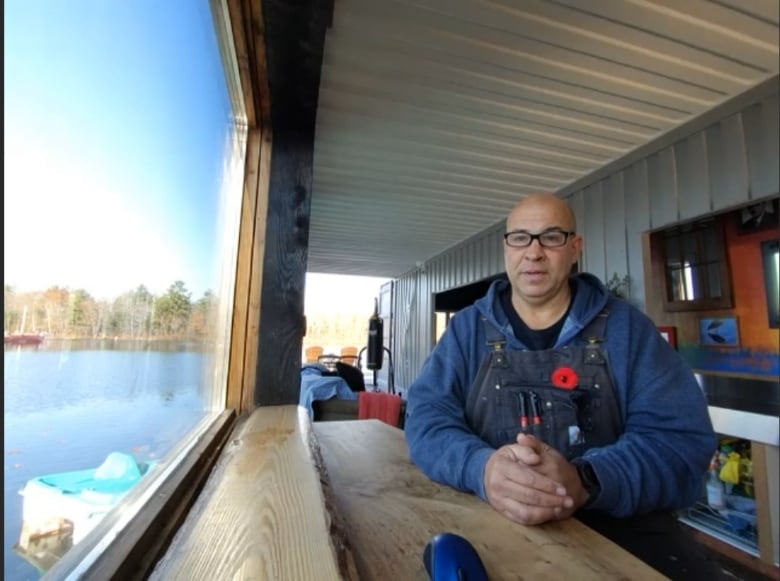 Anchored at the Severn marina in southern Ontario’s cottage country are two 53-foot-long shipping containers. They’re the home of Joe Nimens — and the model for the year-round floating cottages he’d like to construct.

“It’s our prototype and it’s starting to look nice on the inside,” said Nimens, speaking to CBC from inside the floating cottage.

“It’s not nice-looking on the outside because we aren’t done yet,” he said. “And we had to start somewhere.”

Nimens says construction began a little more than two years ago, and he moved in shortly after. He pulled the structure onto the water for the first time about 18 months ago.

But the structure is drawing the ire of some local residents in this community about 160 kilometres north of Toronto, who are voicing concerns about the safety of having the floating structures in the waterways and their effect on the environment. At issue is also the fact that the shipping container home is designated a “vessel” by Transport Canada, which means the structure isn’t governed by the Ontario building code or permits and, as such, isn’t subject to municipal zoning — meaning there is little local governments can actually do to regulate them.

He’s now manufacturing four floating homes for sale — and says he’s pressing on with a plan to construct more.

Unlike houseboats, which have motors and can self-navigate through bodies of water, these floating shipping containers cannot move on their own and must be towed — a reality that some residents said was a safety concern.

They’re also different from other floating homes that are permanently moored to a marina and attached to a septic system and other utilities.

Peter Koetsier, mayor of the adjacent Township of Georgian Bay, says he’s been hearing “a great deal of concern” from his local residents about the structures.

Those concerns, he says, range from the environmental impact of the styrofoam, which lines the bottom of Nimens’s home, to the wastewater management of the structures.

Nimen’s floating cottage has spuds, large steel posts that drop down and anchor it to the lake bottom when it’s out on the water. As a vessel, it’s allowed to anchor on Crown land free for up to 21 days.

Koetsier says he’s heard concerns about potential damage to the lake beds. While lake bottoms are managed by the province, in his township, specifically, zoning bylaws give it the authority to restrict what people can build on the lake bottom — for example, docks or boathouses.

“So, this particular structure as an accommodation above our lake bottom is against our local bylaws. Unfortunately, we also have to go work in conjunction with the federal government, which controls the waters and the rules around vessels,” said Koetsier.

“We believe that they should be subject to … all the bylaws of the local community, subject to the local property taxes that we’re going to pay for the emergency services that they may require.”

Over in the Township of Severn, Mayor Mike Burkett shares that view.

“The federal government has deemed them a vessel. Our hands are tied. We cannot do anything,” Burkett told CBC News, who added he hopes all three levels of government can address these issues collectively.

“We all need to work together. They’re not listening to our concerns.”

Some cottagers are also expressing concerns about the environment and safety.

“There is nothing right now that states how they are to be built, what is, what the electrical systems are, what their plumbing system is like, what kind of construction standards they have to have,” said Cheryl Elliot-Fraser, president of the Gloucester Pool Cottagers association.

“That is a huge concern because if these move to any other lake, how do we know that they are safe to be in there?”

This time of year, the Trent-Severn waterway is quiet, but cottager Dianne Bonnell says come summer, it’s packed with boats. In addition to the potential environmental concerns raised, she’s worried about the safety of the structure itself which has no way of navigating on its own.

“If something should happen and the spuds become unglued from the floor or from the lake bed, it’s going to float and there’s going to be no way that it can avoid other boaters,’ said Bonnell.

The head of the Georgian Bay Association says with climate change bringing more variable weather to the area, safety is a real concern among many residents.

“The fact that these units are not navigable … they’re not very stable in any kind of wind or wave action is a concern,” said Rupert Kindersley, a spokesperson with the association.

Another source of frustration, Bonnell says, is how difficult it is for cottagers to obtain permits to build docks or boathouses — and yet these container structures can simply be put on the water.

“If this double standard is perpetuated, it’s going to create an issue amongst those who are trying to comply with rules and regulations,” Bonnell said.

In a statement to CBC News, Transport Canada said: “Although most floating accommodations are not designed as a typical boat with propulsion or motors, they are considered vessels — just like barges.”

The agency confirmed Nimens’s structure meets its “vessel” definition and that officials from the department have inspected it after concerns were raised by locals. It said because it’s a recreational vessel it doesn’t require formal approval from Transport Canada; however, it stated that it is the responsibility of the owner to make sure the vessel meets all applicable regulatory requirements.

Transport Canada also said it’s up to each municipality to decide whether they want to apply municipal regulations.

“The process by which the licence is granted is maybe a bit too loose in these circumstances,” said Peter Frost, whose is part of the council that advises Transport Canada on issues related to the safety of recreational boaters.

“They don’t appear to be easily manoeuvred and sometimes they need to be pulled or pushed effectively by a tug, which again seems to take them out of the category of being true vessels in my mind.”

As for Nimens, he says any future floating homes he constructs will use encased styrofoam to address one of the environmental concerns raised by area residents. When it comes to waste, he says he has a built-in incinerator toilet; while grey water goes into the lake, he says he’s working to purchase self-contained green septic boxes manufactured in B.C.

Nimens maintains his homes are more sustainable than traditional ones because they don’t involve digging up land, disturbing the shoreline or cutting down any trees.

As for the outcry from two local mayors and some residents, he said he hopes they’ll sit down with him and have a conversation.

“Anybody who is upset or would like to discuss it with us, we’re more than happy to talk about what we’re doing.”