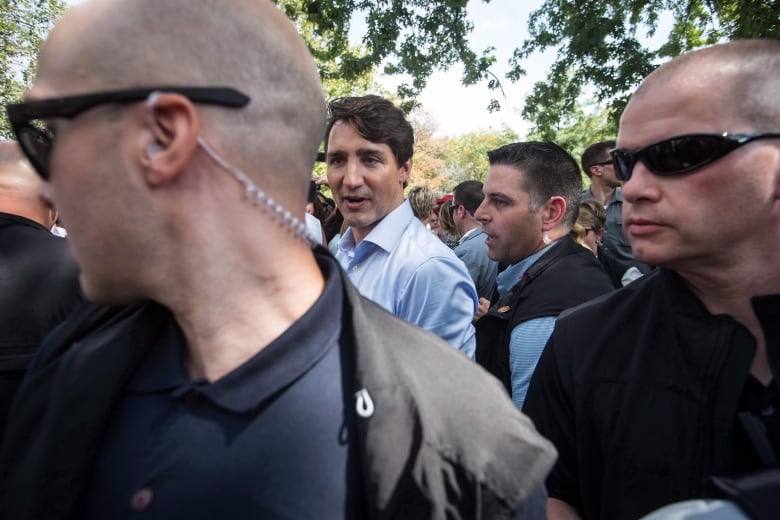 A former member of Justin Trudeau’s security team may have leaked the prime minister’s schedule, according to an intelligence document tabled before the inquiry investigating the federal government’s use of the Emergencies Act last winter.

An Ontario Provincial Police (OPP) “person of interest” profile citing the RCMP says a former RCMP officer is “believed to have leaked the prime minister’s schedule a few months ago.” The document is dated January 30, 2022.

The document said the individual — whose name is redacted — resigned from the RCMP in 2021 in response to the federal government’s vaccine mandate for Mounties. The mandate went into effect on October 6, 2021.

The document — again citing the RCMP — said that the individual was also a sniper and intelligence officer. The document did not indicate who received the leaked information.

“[Redacted] has been very vocal on social media in his belief that the vaccine mandates are in violation of the Canadian Constitution,” the document says.

The Public Order Emergency Commission inquiry is holding hearings in Ottawa to investigate the federal government’s decision to invoke the Emergencies Act to end an anti-vaccine mandate protest that gridlocked downtown Ottawa for weeks last winter.

The profile says the former RCMP officer is involved with the group “Mounties For Freedom,” made up of current and former Mounties who oppose COVID-19 public health measures.

While the individual isn’t named, their redacted photo is sourced from a YouTube interview with Daniel Bulford, a former RCMP officer whose professional background and post-RCMP activities align with the profile.

In that interview, posted November 9, 2021, Bulford told former philosophy professor Julie Ponesse that he had become disillusioned with protective policing — and that Trudeau’s politics contributed to his disillusionment.

“I’ll admit that I think it made a difference who was in office. I think it did,” Bulford said in the video.

“Not that I don’t care about his safety. It’s just that I knew that my heart wasn’t really in it anymore and I was lying to myself if I stayed in that role.”

Bulford said he’d been on leave since around the time the mandate came into effect but added that he was still technically employed by the RCMP.

The person of interest profile says the RCMP officer who leaked the PM’s schedule was the “self-proclaimed ‘lead’ in the command post for Freedom Convoy 2022.”

Bulford hasn’t responded to a request for comment from CBC News. He told the Globe and Mail last week that he’s never revealed sensitive information or tradecraft that would be protected under the Security of Information Act.

The Prime Minister Protection Detail (PMPD), an RCMP unit, is tasked with protecting prime ministers and their families 24/7.

The RCMP has not responded to CBC’s questions about why it suspects a former officer leaked the schedule, when the schedule was leaked, and to whom.

A spokesperson for the Prime Minister’s Office (PMO) said in an email that the PMO is “not able to comment on security matters.”

Trudeau has adopted a number of notable security measures during his time as prime minister. He cancelled a rally and wore a protective vest.

Trudeau also had gravel thrown at him while boarding a bus in London, Ont last year during the federal election campaign. Police charged Shane Marshall of St. Thomas, Ont. with assault with a deadly weapon in relation to that incident.

Bulford is expected to testify at the Emergencies Act inquiry Friday.

Wesley Wark, a senior fellow at the Centre for International Governance Innovation who specializes in security and intelligence, said the alleged leak is troubling.

“The prime minister has to have trust in the RCMP protective policing section not only to protect him, but also to keep information secure about his movements,” Wark told CBC News.

Leaks of such sensitive information also could affect Canada’s security reputation among other countries, Wark said.

“States are rightly concerned about the reputation they may have for protecting secrets, and that goes to intelligence secrets, and it goes to secrets, for example, around their ability to protect VIPs,” he said.

“For a country like Canada that prides itself on its international engagement, and various roles it plays in the international community, it wants to be able to welcome, and of course protect, heads of state, for example, or key ministers who might be visiting Ottawa or somewhere else in Canada, from any security threats.”

Pierre-Yves Bourduas, a former deputy RCMP commissioner, said the profile doesn’t indicate that more than one person may have been involved in leaking sensitive information. He added the profile only cites one potential leak that allegedly happened months before the profile was written.

“There doesn’t seem to be recent information that [has been] received from the prime minister’s security detail,” Bourduas said.

Bourduas said it’s also worth noting that the profile described the individual as “reportedly cooperative and forthcoming with peaceful intentions.”

But Bourduas said a leak of sensitive information would still be alarming — and potentially harmful for the officers responsible for protecting the prime minister.

“You’d really have to dig deep and try to determine what is the source of that particular leak,” Bourduas said.