‘Why navy is keeping dismissed rating’ 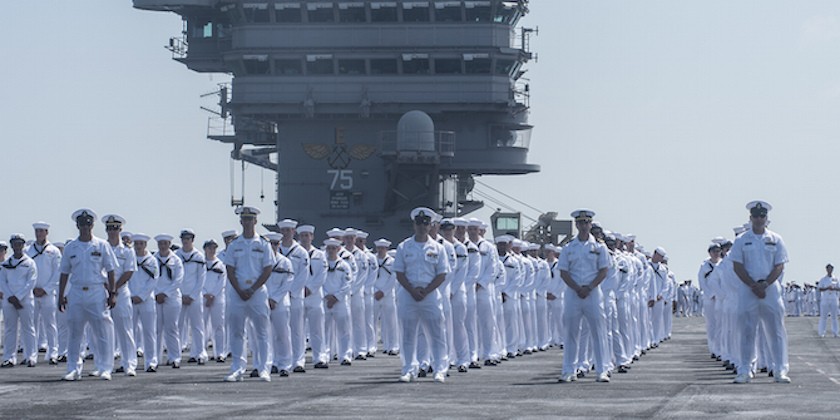 sources in the Nigerian Navy on Tuesday said a former naval rating, Lucky Nyoko, was being kept by the authorities for “security reason and national interest.”

PUNCH Metro gathered from the sources that Lucky, after his dismissal, allegedly indulged in some activities that made him a threat to national security.

He was alleged to have met some suspected militants in the creeks, a claim which his wife, Sonia, denied.

She, however, acknowledged that her husband had special military training, adding that he was being held by the authorities over fear that he could be a risk.

PUNCH Metro had reported that Lucky, who was attached to the Naval Special Boat Services Camp, Ojo, was first detained in March 2015 for alleged possession of firearms.

A special court sentenced him to six months’ imprisonment, but he was not released at the expiration of the term of the punishment.

After PUNCH Metro reported the case in January 2016, the Ahoada-West, Rivers State indigene, was released from detention and subsequently dismissed from service.

Lucky was said to have approached the Femi Falana Chambers, which sued the navy for extending his term of punishment unjustly.

A Lagos court awarded N10m damages against the Nigerian Navy for infringing on his rights.

However, a few weeks to the verdict, the lawyer to the victim, Chukwuma Onwuemene, alleged that the Flag Officer Commanding, Naval Training Command, Harbour Road, Apapa, Ifeola Mohammed, ordered some naval ratings to arrest Lucky at his Port Harcourt home.

He was said to have been handed over to the police in Lagos, who investigated him over his alleged involvement in the theft of weapons in the naval armoury in December 2016.

Despite his clearance by the police, the navy refused to release him.

He was said to have been tortured to a coma and was rushed to a private hospital from where he was transferred to the Lagos University Teaching Hospital, idi-Araba.

The navy reportedly transferred him to Abuja where he had since been held incommunicado.

The spokesperson for the Western Naval Command, Apapa, Lt. Commander Chinwe Umar, had said the FOC, Naval Training Command, Mohammed, did not know about the incident.

Umar had said, “The Oga has mandated me; the C-Info will send you his reply and he said you must use it; he is not the one in the picture. He doesn’t know anything about this thing that he went and arrested somebody. He is so mad. He doesn’t have any hand (in it). He doesn’t even know about this story.”

However, a naval source in Lagos who is familiar with the case, said Lucky’s dismissal in January 2016 followed a series of wrongdoings.

She said, “Lucky joined the navy as a fitness instructor and was trained for special boat services. However, he became a threat to the system.

“In 2005, the first year of his enlistment, he was reprimanded twice. He was misbehaving and had to be charged with unruly behaviour. He was using his training to intimidate people and had to be punished. In that same year, he was charged with disobedience and was placed in confinement for 21 days with hard labour.

“The following year, he was severely reprimanded for insubordination. At this point, he became a subject of interest to the navy.

“He was dismissed from the force after he was found in possession of 170 pieces of bullets. With 170 rounds of ammunition, do you think anybody is safe around him? Since the time he received the special training, he had become a problem to the system.

“After his dismissal, he was arrested in Ahoada, Rivers State, by the Joint Task Force with three people in the boot of his car.

“Just last year, he was arrested in Port Harcourt for impersonation by a troop of brigade.”

Another source also confided in PUNCH Metro that Lucky was being held in a safe facility for the purpose of reorientation.

The source said since Lucky’s dismissal, he had been under the radar of the navy.

“This case is about national security. The man is hale and hearty and was not brutalised by anyone as claimed,” the source noted.

Sonia, however, refuted the allegations, saying the authorities were only afraid of her husband’s training.

She said, “Some white men had actually trained some naval officials and he was among them. After the training, the white men abandoned some of the bullets. He collected those bullets and kept them in his hostel in Navy town, Lagos.

“Around that time, a naval officer misplaced his gun and during a search for it, they saw the bullets and raised the alarm. Assuming he kept the bullets for a negative reason, he would have lied; but he didn’t lie. He told them he forgot to return them.

“He did not kidnap anybody. Somebody actually offended him; he became angry and beat up the person. He was not using the naval position to extort anybody.

“All they are saying are just lies. He does not have any link to their missing arms. The truth is that when he was arrested and they sent a signal to the navy, the navy said he should be killed.

“He couldn’t have stolen any arms. The whole thing is a frame-up. They are afraid because he was well trained before his dismissal. Their fear is that if they leave him with all the skills he has, he will do something else.”

The Navy Director of Information, Captain Suleiman Dahun, said the agency had received a letter from the Femi Falana Chambers which was being processed.

He said, “Like I earlier told you, this is a sensitive matter and we will not hold him without any reason. Just be patient with us. At the completion of investigation, we will make our findings public.”