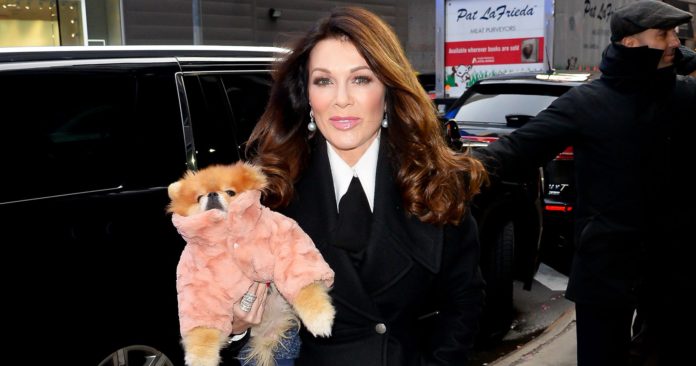 Absent for a good reason. It seemed like every Real Housewife attended Andy Cohen’s baby shower in Los Angeles on Saturday, January 26, but one of Bravo’s biggest personalities, Lisa Vanderpump, was notably missing. While the the Real Housewives of Beverly Hills star’s absence was surprising, she had a good reason for being a no-show.

Lisa, 58, had to skip the celebration because she was in Las Vegas for a prior commitment. “In Veeggaasss baby!” she wrote via Instagram on Friday, January 25. “Food tasting, designing, for @vanderpumpvegas ! #comingsoon.”

It was announced in November 2018 that the SUR owner would be expanding her restaurant empire to Vegas with Vanderpump Cocktail Garden at Caesars Palace.

On the day of the Watch What Happens Live With Andy Cohen host’s shower, the U.K. native was busy looking at potential decor for her new lounge. “Wow a creative day in Vegas…” she captioned an Instagram photo of herself and her dog Puffy. “You have to check out, my friend and partner at world market @nickalain as we create our Vegas cocktail garden. His showroom is phenomenal … #vanderpumpvegas #caesarspalace #romanticindustrial.”

“Thanks OG’s Kyle, Vicki, Nene, Ramona & Teresa for hosting a party like no other,” Cohen, 50, gushed via Instagram on Sunday, January 27. “And @brucebozzi, the Palm Beverly Hills is now an iconic stop on any Housewives Tour. It’s the Room Where It Happened.”

Other Bravo reality stars such as Lisa Rinna, Teddi Mellencamp, Erika Jayne, Dorinda Medley and Denise Richards were also there to to celebrate.

The TV producer announced that he is expecting a baby via surrogate during a December 2018 episode of Watch What Happens Live.

“After many years of careful deliberation, fair amount of prayers and the benefit of science, if all goes according to plan, in about six weeks time, I’m going to become a father thanks to a wonderful surrogate who is carrying my future,” he said at the time. “Family means everything to me and having one of my own is something I’ve wanted in my heart for my entire life. And though it has taken me longer than most to get there, I cannot wait for what I envision will be the most rewarding chapter yet.”

He later revealed during CNN’s live New Year’s Eve broadcast that his first child is a boy.