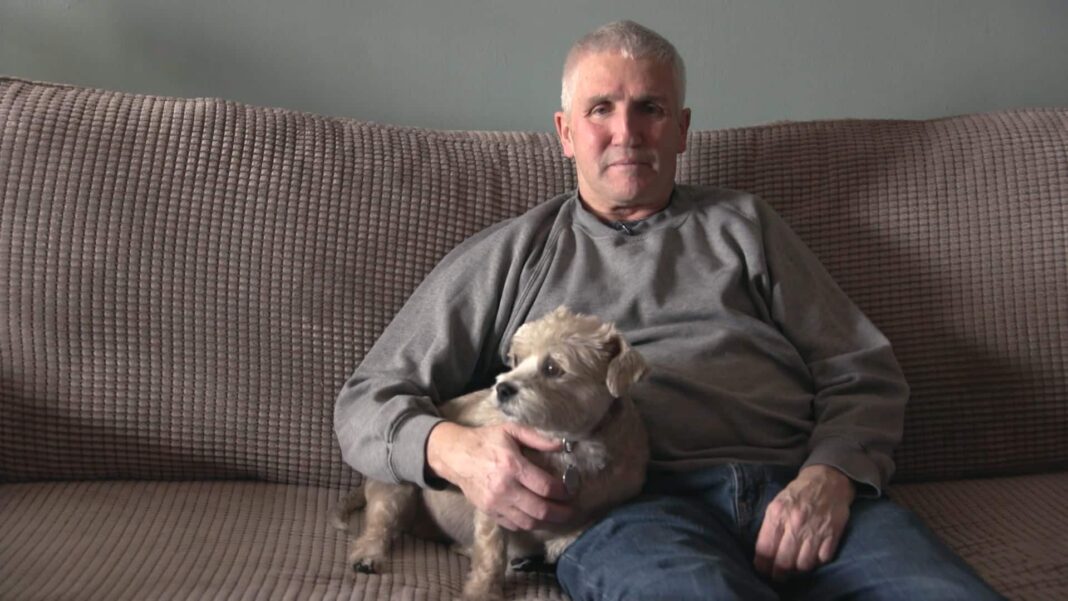 Everything seems to be getting more expensive. Food, gas and housing prices are on the rise while paycheques are slow to keep pace. The CBC News series Priced Out explains why you’re paying more at the register and how Canadians are coping with the high cost of everything.

Kevin O’Toole rarely takes his dog, Stella, for a walk without two or three neighbours stopping him to chat.

“I love my neighbours, the community is great, I’ve got everything I want, and at 72, where am I going to go?” he said of his high-rise apartment in Hamilton.

He worked for 30 years as a waiter. Now he collects his federal pension and works part time at McDonald’s to help keep his head above water.

With rental rates on the rise, he knows that losing his apartment would be a big financial blow.

“To find an affordable apartment, I’d have to go way the hell out to Sudbury or somewhere,” he told The Fifth Estate. “To find affordable housing, it’s unheard of here in Hamilton now.”

WATCH | A tenant vows to stay in his apartment as long as he can: 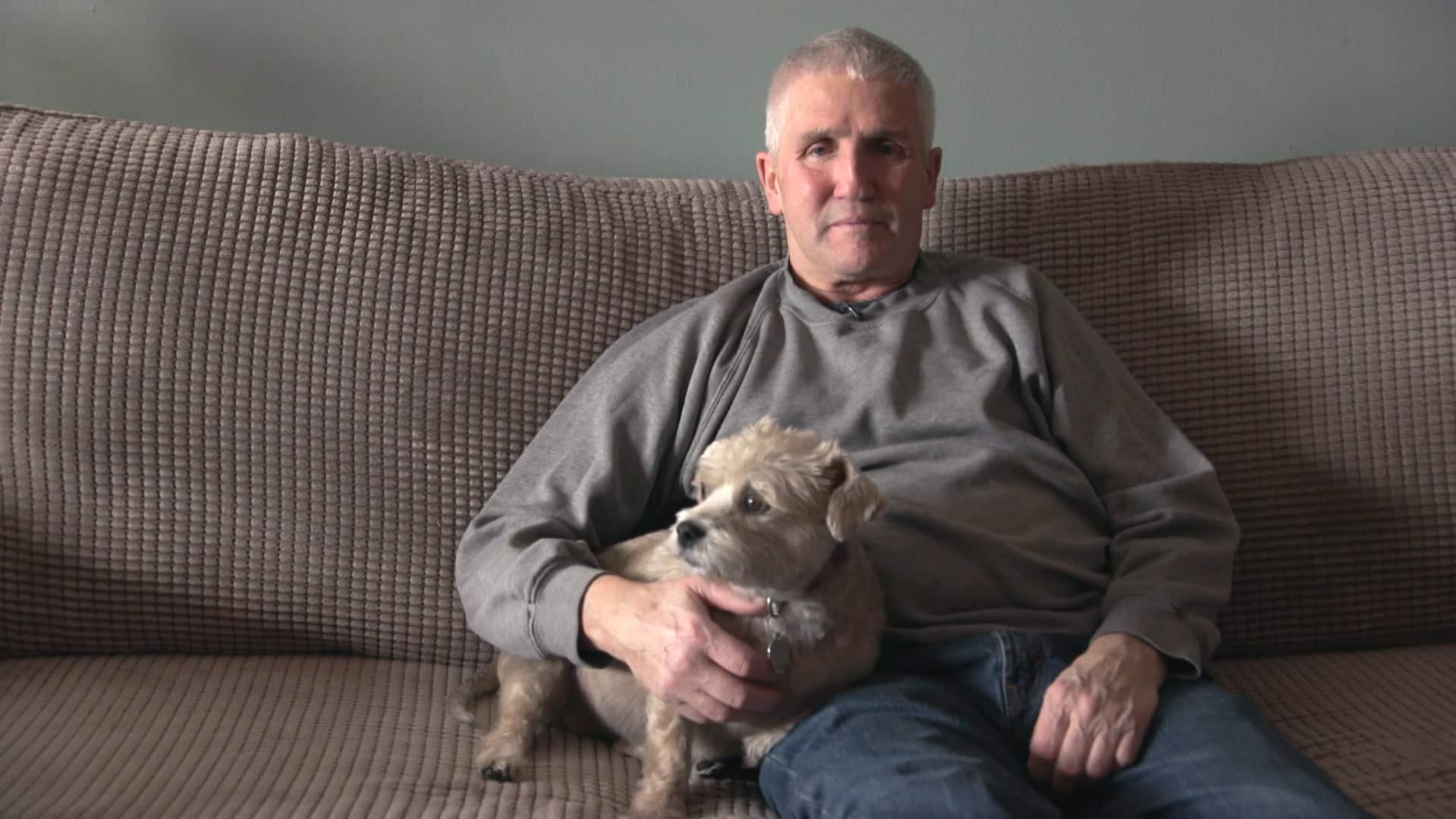 Tenant Kevin O’Toole says he likes his community, and will fight to stay in the apartment he’s rented since 2010. 0:38

O’Toole is right. Research shows that in the last decade, Canada has been losing affordable rental units, those available to individuals making $30,000 a year or less, far faster than new ones are being built, and it’s forcing some renters out of the homes and communities they know.

Neither the private market nor the public sector has articulated plans for how to deal with the large number of renters affected by the loss.

A key factor driving up rents in Canada is the shortage of supply, but it’s not just that new units aren’t being built fast enough.

Increases when units turn over

According to research from Steve Pomeroy, a senior research fellow at Carleton University in Ottawa, rentals that were once considered affordable are seeing significant price increases.

Because many provinces control how much rents can be raised on tenants who stay in the same unit, most of these increases occur when the unit turns over.

“If you’re a sitting tenant, then the rental rates only go up by the costs of inflation and so that’s great,” said Douglas Kwan, director of legal services at the Advocacy Centre for Tenants Ontario. “That’s manageable.”

However, in the current rental environment, “there is a tremendous incentive to remove that sitting tenant,” he said.

The discrepancy in prices is surprising for renters like O’Toole, whose rent has risen from $715 to $825 since he took occupancy more than a decade ago.

According to 2016 census data, nearly 30 per cent of Canadians, or 4.4 million households, rent their home, and statistics from the Canadian government show they’re under increasing pressure.

Using data from the Canada Mortgage and Housing Corporation (CMHC), which lists average rents for bachelor, two- and three- bedroom apartments in large metropolitan areas, The Fifth Estate calculated that between 2014 and 2019, rents countrywide increased by nearly 20 per cent. At the same time, incomes remained largely unchanged.

When housing costs more than 30 per cent of a person’s income, that housing is unaffordable, according to the federal government.

A recent report from the CMHC said that a two-bedroom apartment rental is beyond the reach of the average person who works full time in many cities, including Vancouver, Victoria, Winnipeg, Peterborough, London, Kingston, Toronto and Halifax.

In Dartmouth, N.S., across the harbour from Halifax, John and Stacey Smith have experienced first-hand what having to move can cost a family. In November, the duplex they were renting was sold to a new owner who wanted to move in.

Even though they both work full time, finding a new place that they felt they could afford and fit their two teenage children was difficult. When they found it, their monthly rent went from $751 to $1,750.

“I’m trying to make it better for my kids and my family,” John Smith said. “I put family first, but I mean, it’s, it’s crazy. It really is.

As Canada’s real estate market has heated up, large investors have brought industrial standardization and a financial focus to the landlord business.

The Bank of Canada says that one in five people buying a house is doing so as an investment.

Martine August, an assistant professor in the school of planning at the University of Waterloo in Waterloo, Ont., estimates that 20 to 30 per cent of Canada’s rental apartment market is owned by institutional landlords, and that real estate investment trusts — or REITs — own nearly 200,000 rental units countrywide.

Real estate investment trusts own or invest in income-producing real estate and distribute profits to their shareholders. Many are traded publicly on the stock market.

Some in the industry give similar estimates. REALPAC, the association that represents many of Canada’s largest real estate companies, says the top 21 large real estate owners hold 17.6 per cent of the rental apartment market.

“We’re seeing this kind of single-minded orientation towards trying to extract as much value as possible out of those buildings,” August said.

“The important thing to realize is that those buildings are people’s homes. And where that money comes from is basically tenants’ pockets.”

When a landlord does renovations to their property, in some cases they can pass those costs on to tenants in the form of increased rents.

“Those above guideline increases are critical for the landlord to be able to get a return on that extra cost that landlords have to spend to upgrade the building,” said Michael Brooks, CEO of REALPAC.

“This is like an old house, it’s the same analogy. At some point in time, you need to do a lot of upgrades to modernize that house. That’s really expensive.”

August doesn’t see it that way. She believes that above guideline increases are a tool firms use to get around rent controls the government put in place.

“Repairs and renovations actually make money for firms,” August said. “They invest in them because they can extract higher rents afterwards.”

She said that making a profit is not something these companies are struggling with.

“The idea that they need to raise rents in order to do basic maintenance,” she said, “to me, it’s kind of insulting.”

According to annual reports published by the four largest real estate investment trusts in Canada, they disbursed more than $2 billion in profits to their investors between 2015 and 2020.

In 2018, O’Toole’s landlord, a real estate investment trust called InterRent, applied for an above guideline increase hoping to raise rents in the building by nine per cent over two years.

He and his neighbours fought the increase at a hearing before Ontario’s Landlord and Tenant Board in Hamilton and it was reduced by more than half.

WATCH | These Hamilton tenants went on rent strike to fight back against their landlord: 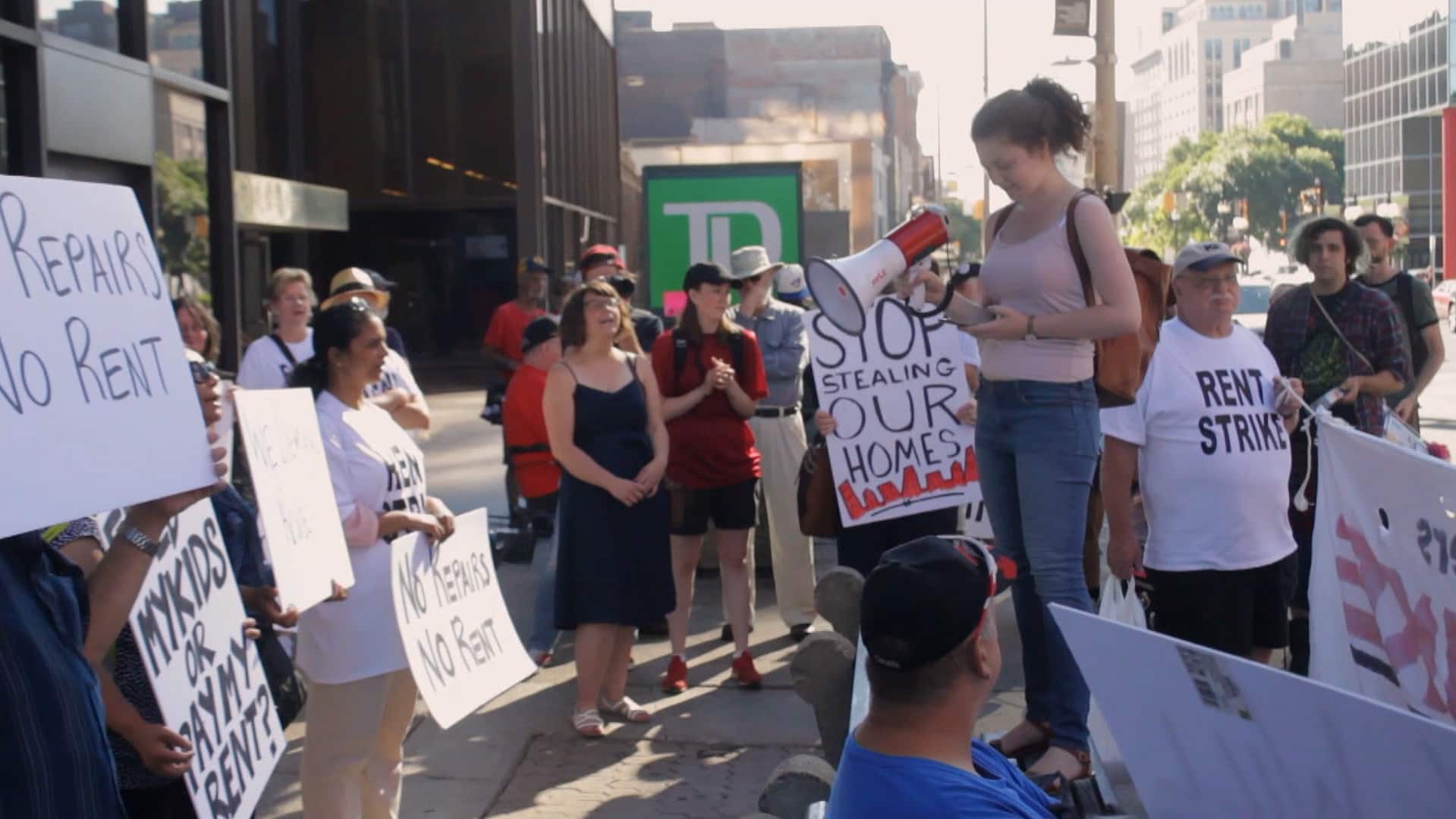 Kevin O’Toole says he shouldn’t have to pay for cosmetic upgrades to his building. 0:49

“If you’re a homeowner you have to pay all these things, but you own a home, I don’t. So don’t pass it onto me,” O’Toole said.

InterRent did not respond to multiple requests for comment.

Brooks said that to place housing affordability issues at the feet of large landlords is incorrect.

“Without landlords who have access to capital and scale and good management, without that, you’re not going to meet the housing needs of this country.”

Affordability is a problem we all have to address, Brooks said, but “you can’t expect the private sector to solve all social ills.”

“What we really need to solve this unprecedented housing shortage at the bottom end, the affordable end and the deeply affordable end of the markets is an integrated national housing strategy.”

The Fifth Estate made multiple requests over several weeks to speak with federal Housing Minister Ahmed Hussen and was declined each time.

Within that time frame, Hussen sat down with a committee of MPs to discuss the housing affordability issue.

In the meeting, he noted that “a lot of work has been done and more work needs to be done,” and that since 2020 through the rapid housing initiative, a program centred on building affordable housing for vulnerable populations, the government provided funding for 10,250 affordable housing units.

The Fifth Estate asked his office whether that was enough, given that hundreds of thousands of affordable units have been removed from the market in the last decade.

They answered that a single affordable housing project can take up to three years to complete, and that “the national housing strategy initiatives are taking steps to fill important supply gaps in the Canadian housing landscape.”

The minister did not answer questions about how many affordable units have been built under the strategy or what the rent for those units is.

Meanwhile, renters like O’Toole have no confidence that help is coming.

“I think the government should be held accountable,” he said, noting that municipal and provincial governments all play a role in housing.

“All they’re saying is first-time homeowners. Nobody’s talking about the renters. Nobody,” he said. “And we’re just as equally important as somebody who owns a home.”