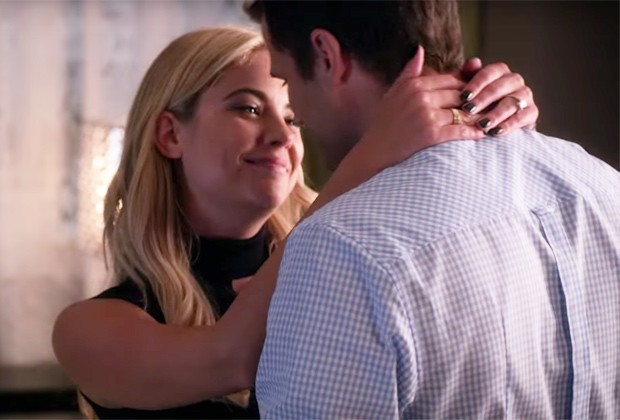 Another Pretty Little Liars wedding is on the horizon! (Warning, spoilers ahead for PLL‘s June 6 episode. Look away now or prepare for a life of vaguely threatening texts if you complain about being spoiled!)

Caleb (Tyler Blackburn) proposed to Hanna (Ashley Benson) on tonight’s episode of Pretty Little Liars, and it was perfect. In fact, they basically got married right then and there!

Making the proposal/sort-of marriage even more perfect? It happened in a tent in the woods…just like their first date all those years again. No, we’re not crying. You are! (OK fine, we’re all crying.)

“Hanna, I would marry you right this second if we could find a bear who was licensed,” Caleb said, before Hanna pulled out celebratory champagne and cigars, which ended up providing temporary rings for the couple to put on each other’s fingers.

“When can I kiss the bride?” Caleb asked after slipping the make-do ring on her finger. Hanna’s response? “Now.” And we think you can figure out what happened next.

The proposal also happened to coincide with the return of Hanna’s mom Ashley (Laura Leighton) who returned to check in on her daughter, giving Caleb the opportunity to tell her, “I want to marry your daughter, Mrs. Marin.” Swoon!

Oh, and for inquiring minds: the song playing during the tent seen was “Light Me Up” by Ingrid Michaelson.

Elsewhere tonight, we finally got the musical number we’ve been hearing about for the past few months, led by Mona (Janel Parrish) in a dream sequence set to Jailhouse Rock.