Who was called to help and who was not: The police resources behind the Nova Scotia shooting 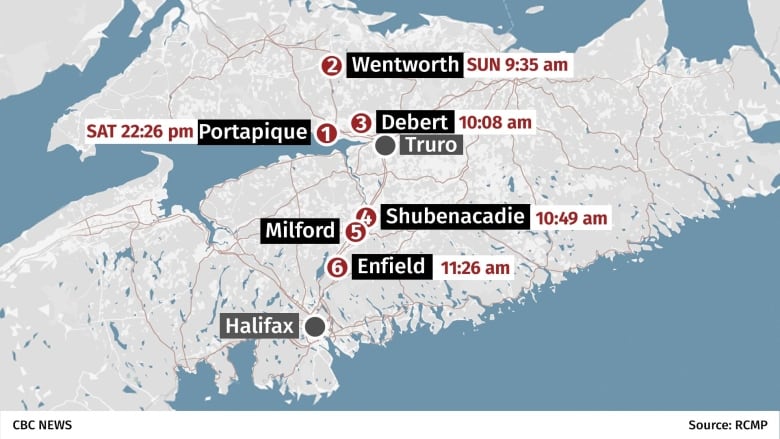 In the midst of dealing with a complicated active shooter investigation, Nova Scotia RCMP looked to New Brunswick for help, but not to the closest municipal police forces even though they were on standby, CBC News has learned.

On April 18 and 19, a gunman went on a shooting rampage across central Nova Scotia that left 22 victims dead. It began in the small community of Portapique, in Colchester County, and ended about 13 hours and 150 kilometres later at a gas station in Enfield, when the gunman was killed by police.

During the investigation, RCMP have said they brought in police dog services and a helicopter from the Department of Lands and Forestry. They also engaged specialized units and resources from New Brunswick RCMP, including an emergency response team from Moncton to assist the Nova Scotia team.

Fredericton Police, about 330 kilometres away, did “deploy resources,” a spokesperson said via email. But they were called off once the gunman was killed. They would not specify what kind of resources, operations or tactics were used.

The two municipal police forces in Nova Scotia closest to Portapique, Truro and Amherst, were not asked to respond directly to the mass shooting at any point.

Chief Dave MacNeil of the Truro Police Service, about 40 kilometres east of Portapique, said they first heard of the situation from the Colchester East Hants Health Centre just before midnight on April 18. The hospital asked for police to put their building under lockdown as they treated a shooting victim.

RCMP began sending them information after 1 a.m. AT on April 19, MacNeil said, including that the suspected gunman had several police-style cars in his name, one of which might carry a decal.

Just after 8 a.m. Sunday, MacNeil said they were told police were looking for a fully marked replica RCMP car.

MacNeil said they have officers on the road 24/7, and he brought in additional people on Sunday morning just in case.

“We all work together, and if they needed us they would reach out, I’m sure,” he said.

According to the RCMP timeline, the gunman drove directly through Truro between 10:15 and 10:20 a.m. on April 19 without stopping. He left via Highway 2, in the direction of Millbrook.

When asked if Truro police were given any details about the gunman’s movements, MacNeil said their officers had contacted the RCMP on several occasions that Sunday. The Mounties tried their best to provide updates given the “dynamic” situation, MacNeil said, but they weren’t told about specific locations where the gunman might be.

Chief Dwayne Pike of the Amherst Police Department, about 90 kilometres northwest of Portapique, said they were asked to help cover RCMP calls unrelated to the shooting that came in around Colchester County on April 19.

Pike said he isn’t surprised their force wasn’t called in to help the night of April 18 because at that point it wasn’t clear what the full extent of the tragedy was.

“There are lots of gun calls all the time that we get in different areas and we don’t get asked to respond [by RCMP] and vice versa,” Pike said.

Chief Larry Kinsman of the Great Village volunteer fire brigade said his crew was told by the RCMP not to respond to the Portapique fires for their own safety.

He said the nearby Bass River fire crew had staged themselves at the community of Five Houses, a couple kilometres west of Portapique. They weren’t allowed any closer because nobody knew where the shooter was, Kinsman said.

Being asked to wait on the sidelines made for “a hell of a long night,” Kinsman said.

“Well, when you stop and think about it, thank God it was called in as a shooting and not just a fire. Because chances are Bass River and us both would have rolled in there and Lord knows what we could have drove into.”

Paul Palango, a Nova Scotia-based author who has written three books about the RCMP, said it’s “outrageous” the gunman was able to freely drive through Truro on a Sunday morning.

He questioned why the RCMP decided to call in New Brunswick RCMP from hours away when the Truro police force was so much closer. As well, Palango questions why the RCMP didn’t ask Truro police to help set up secondary perimeters to catch the gunman.

At some point on the morning of April 19, RCMP did turn to Halifax Regional Police (HRP) for assistance as the gunman drove across the province.

Halifax municipal police vehicles were seen around the Irving Big Stop in Enfield, where the gunman was shot and killed by police.

Based on RCMP reports, audio recordings and interviews, this is what we know about what happened during a gunman’s rampage that left 22 victims dead. 7:21

When asked for details on HRP’s response to the shooting, spokesperson Const. John MacLeod said via email it would be “inappropriate” for them to comment on specifics given the ongoing investigation led by the RCMP.

Although CBC News asked for more details from the RCMP on Monday, they had not provided a response about HRP’s involvement, or why Truro police were not called in, by Friday evening.

The gunman continued his rampage through Wentworth, Debert, and Shubenacadie, where he shot and wounded Const. Chad Morrison before colliding with Const. Heidi Stevenson on Highway 2.

What RCMP have said

Although Morrison and Stevenson were alone in their separate vehicles, RCMP Supt. Darren Campbell has said not all RCMP cars were carrying just one officer that day. There were “several other resources” in the area, including more than one tactical unit, he said.

“All those officers that were out there were needed within certain areas,” Campbell said.

He said it can’t be underestimated just how much of an advantage the gunman had, thanks to his replica RCMP car and authentic uniform.

The “horrific” set of circumstances meant the Mounties were searching for someone who looked like them and brought in unique dangers and complications, he said

Kinsman, of the Great Village volunteer brigade, about nine kilometres east from Portapique, first heard about a situation around 10:45 p.m. Saturday from his fellow chief in the Bass River fire department.

Bass River is slightly closer to Portapique on the west side, and Kinsman was asked to get a crew together in case they were needed for an ongoing situation.

Shortly after Kinsman assembled a crew of five members, he said he got a call from an RCMP officer asking if they could use the fire hall as a command centre.

They had a large group of RCMP based there throughout the night into the morning hours of April 19, Kinsman said, plus three or four ambulances.

Kinsman said they helped RCMP as needed in the early morning hours of April 19, including picking up food from Masstown Market to feed the officers, and delivering a dog that had been shot to a veterinarian in Bible Hill.

Later Sunday morning, after the gunman was shot and killed in Enfield just before 11:30 a.m., Kinsman said the RCMP asked their brigade to join Bass River in putting out small spot fires around Portapique.

There wasn’t much that had to be done, Kinsman said, but the RCMP wanted to be extra careful that any hotspots didn’t spread into the nearby woods. They dampened the grass around the outside edges of the foundations where some buildings had burned.

Kinsman said there was “nothing left” of the structures besides smouldering basements, which they were not allowed to touch in order to preserve any evidence.

‘I’m sure they were doing the best that they could’

Michael Gregory, who retired from the RCMP in 1996, said in his 25 years on the force he was never aware of protocol advising Mounties to avoid asking municipal forces for help.

Gregory, now a Colchester County councillor living in Tatamagouche, said decades ago he would regularly co-ordinate with town police in Digby. When he was in Lower Sackville, N.S., they often worked alongside the neighbouring police force in Bedford.

Although Gregory said he and many Colchester councillors are left with questions about what happened from the RCMP’s perspective over the 13-hour shooting situation, he has faith their municipal police board will eventually find out more details.

Gregory added he’s been involved with tragic cases in the past, but the mass shooting is “above and beyond” the scope of anything he’s ever dealt with. He said it will likely deeply impact the RCMP members who responded. Thankfully, Gregory said, mental health supports have come a long way since he retired.

“I don’t know how you could ever explain it to somebody,” Gregory said.

“I’m sure they were doing the best that they could. You know, it’s not for me to sit in my armchair and judge or criticize what they did or what they didn’t do.”