Which is a better investment, Bitcoin or Ethereum? 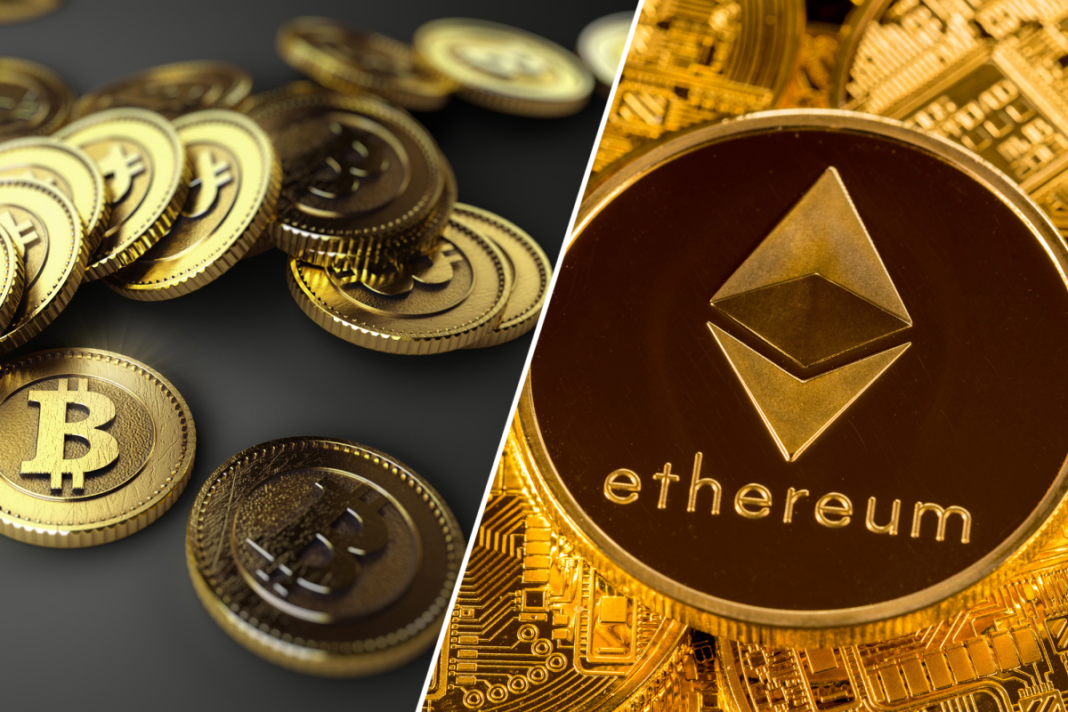 Bitcoin or Ethereum, Many people consider Bitcoin (BTC) and Ethereum the Coke and Pepsi of crypto.

Although they’re the two biggest cryptocurrencies by market capitalization, similarities more or less end there. Bitcoin and Ethereum are totally different animals, developed for different reasons and with different internal dynamics.

This article will answer the following question; what is the main difference between Ethereum and Bitcoin? Is Ethereum a better investment than Bitcoin? Which is the best investment in the future? With that in mind, we thought it might be useful to break it down with the Ethereum vs. Bitcoin tale of the tape.

Here’s a quick rundown of some of the biggest considerations regarding the investment outlook for each cryptocurrency.

Launched in 2009, Bitcoin is the world’s largest cryptocurrency by market cap. Unlike fiat currency, Bitcoin is created, distributed, traded, and stored using a decentralized ledger system known as a blockchain. Bitcoin’s history as a store of value has been turbulent; the cryptocurrency skyrocketed up to roughly $20,000 per coin in 2017. As the earliest cryptocurrency to meet widespread popularity and success, Bitcoin has inspired many other projects in the blockchain space. Bitcoin is one of the first digital currencies to use peer to peer technology to facilitate instant payments.

Ethereum is a technology that lets you send cryptocurrency to anyone for a small fee. It also powers applications that everyone can use, and no one can take them down. It is much more than a virtual coin. It’s also a blockchain platform, and the cryptocurrency – used to conduct transactions on the platform – is actually called Ether, though it’s often referred to as ethereum, too.

Ethereum vs. Bitcoin; what are the Differences

While Ethereum and Bitcoin share many similarities, they were designed for entirely different purposes. And understanding how (and why) they differ is something you’ll need to know before you can make a sound investment choice.

So here’s a breakdown of the main difference between Bitcoin and Ethereum and what they mean for you as an investor.

Ethereum is unlimited. Unlike Bitcoin, which has its supply capped at 21 million, Ethereum has opted not to set an upper limit on its total coin supply. The supply is continuous, although it will slow down as more coins are produced. Over time, this finite supply will increase demand, pushing up the value of each coin.

Bitcoin is digital money that can be exchanged at any time. It’s also a digital asset with a store of value. That means it can be saved, retrieved, and traded at a later date. This is why many investors see Bitcoin as digital gold.

Ethereum is different. It’s a currency, Ether, that is linked to smart contracts and can only be traded after a set of predetermined conditions have been met.

For example, a Bitcoin transaction process goes like this: person X sends 10 BTC (Bitcoins) to person Y while person Y gives person X the dollar equivalent of the 10 BTC.

Broadly speaking, Bitcoin is money, whereas Ether is a fuel that powers the Ethereum network. In fact, it’s often referred to as gas.

Ethereum can verify transactions (or blocks) within 20 seconds. It takes Bitcoin around 10 minutes to process each block. As such, transactions are much faster on the Ethereum network than on Bitcoin.

Bitcoin is over 10-years old. It’s the one cryptocurrency that most people have heard about. Bitcoin has an established reputation and is now accepted by major retailers, including Microsoft, Starbucks, and BMW. So if (or more likely when) crypto goes mainstream, Bitcoin has a strong chance of becoming the currency of choice.

At the time of writing, Bitcoin is trading at around $31,000 per coin. Ethereum is hovering at $1,291. So for first-time investors with a more limited bankroll, Ethereum is probably a more attractive option.

The Bitcoin and Ethereum blockchains are always being updated. But experts tend to agree that the Ethereum technology is more advanced and robust. It’s faster, and the transaction fees are cheaper than Bitcoin’s. Moreover, programmers across the Ethereum ecosystem are currently working on a major upgrade, known as Ethereum 2.0.

The new platform will simplify Ethereum’s blockchain, increase user security and transaction speed, and reduce entry barriers, making the network accessible to anyone with a standard laptop. There’s no official release as of yet. But advanced testing is already underway.

Is Bitcoin a Better Investment than Ethereum?

So is Bitcoin a better investment than Ethereum?

At the moment, it’s hard to say if Ethereum is a better investment than Bitcoin. Both have very different purposes. Whether one is better than the other largely depends on what you’re looking for, as well as a range of other personal factors. These include the money you intend to invest, are you looking at investing short term or long term, and your risk tolerance.

Bitcoin is still the most dominant asset in the crypto space. It’s well established and was designed to gain value over time. Bitcoin might not promise big returns in the immediate future, but it’s the kind of investment that you’d still want in your portfolio in 10 or maybe 20 years.

For investors, Ethereum’s real value is not tied to its scarcity or its current applications. Instead, Ethereum’s present (and future) value is intrinsically linked to its potential to revolutionize the digital space and the way we do business. Ethereum smart contracts could change everything from mortgage transfers to the way we create and consume online content. Moreover, the most exciting future applications of Ethereum will probably be the ones that we haven’t even thought of yet.

If you put your money into Ethereum, you will be doing so, hoping that the technology will reach its full potential. And there are many indications that it could happen.

Gil Penchina is an American business manager and angel investor. He said, “It’s clear to me now that Ethereum is the new currency of the Internet. It’s way ahead of where PayPal and it’s much more exciting to its customers than PayPal ever was.”

Should you invest in Ethereum or Bitcoin?

Still want to know the better investment, Ethereum or Bitcoin, then here’s some good news; both are.

As you’ve probably figured out, Ethereum was never intended to replace Bitcoin. So rather than seeing Bitcoin and Ethereum as direct competitors, it’s worth thinking about these technologies as complementary platforms with the potential to underpin very different aspects of a digitized financial economy. In other words, the future of crypto is not a winner takes all game; Bitcoin and Ethereum are both a good investment.’

You can split your funds into both, which is known as diversification. Most investors diversify their funds. It’s a way of minimizing risks, creating more opportunities for return, and safeguarding your assets from adverse market cycles.

How you diversify your funds is up to you. You can decide to split the funds 50/50. But if you’re more excited by Bitcoin or feel you understand the Bitcoin market more, you could go for a 70/30 split or vice versa if you think the future for Ethereum looks promising.

Compared to Bitcoin, Ethereum is relatively cheap, making it much more accessible to investors with smaller funds at the current valuations, you could buy around 24 Ethereum for the price of a single Bitcoin. And given the technology’s potential, investing in Ethereum now is a chance to buy low and sell high in the future.

Bitcoin, on the other hand, is here to stay. It’s an established ‘brand,’ and its increasing scarcity makes it an appealing proposition for more cautious investors with an eye on the long-term.

In the end, the final decision comes down to you. What kind of investor do you want to be? Which technology excites you more? And which is currently the most undervalued?

Once you Figure out the answer to that question, you’ll definitely know if Ethereum is a better investment than Bitcoin for you.