When their child’s doctor is 2,800 km away, Inuit families face tough choices 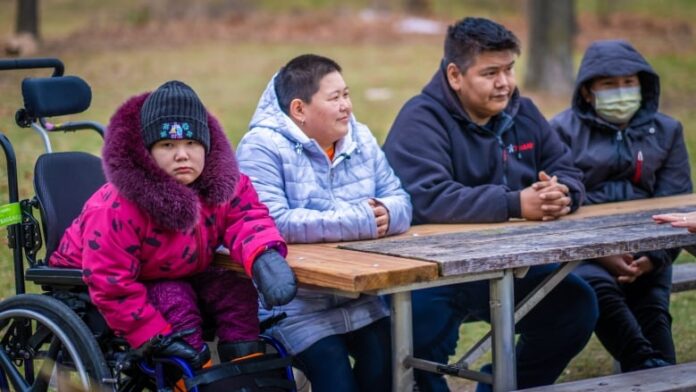 Medical travel between the remote community of Clyde River, Nunavut, and Ottawa has been an essential, but difficult journey for Tina Kuniliusie and her 14-year-old daughter Tijay.

The toll has been high, and after almost a decade and a half of navigating the medical travel system, Tina says her family may have to move to Ottawa permanently.

“Ten years is a long time to fight the system. I cannot continue another 10 years. That is too much on one’s well-being. So whether I like it or not, it looks like it’s going to have to happen,” she said.

Ottawa is a major hub for essential medical services for the hundreds of Nunavut children that have to leave the territory for care. The long and repeated journeys are costly (can be exhausting) for the families, though, and bringing care closer to home is difficult.

For Tina and her partner James Sangoya, Tijay’s father, it can involve several long trips a year — disruptions that take them away from obligations at home, their respective families, and culture.

“It is painful because we have to leave our community and go to a totally different culture to access these medical places that are not available in Nunavut,” Tina Kunilisie said.

Tijay’s first trips by plane to a hospital in Iqaluit were related to respiratory infections. Before she turned one, her family had to take her to CHEO, the children’s hospital in Ottawa, because her medical needs became more complex.

A trip this fall was supposed to last four days, but extended to four weeks as more appointments were added on. Some stays last months, Tina said.

The two-flight journey — from Clyde River to Iqaluit, and then from the territorial capital to Ottawa — typically takes 12 hours.

CHEO has seen a steady annual increase in inpatient admissions and clinic visits from Nunavut over the last decade, which only temporarily slowed during the first two years of the pandemic when travel restrictions were strict.

“At that instant, they have a million questions. They’re scared,” Adams said. “Who is going to watch my children? Who is going to go down and escort [the] child? Am I going to be able to go on leave with pay?”

While Nunavut and Indigenous Services Canada cover medical travel expenses for children and one escort, a second escort or siblings are assessed separately. Families still may face financial hardship because of work interruption or bills at home.

Adams had to travel south for her own care and, at one point, send her teenage daughter away for concussion treatments.

“We are placed in a southern environment where we have no connections to our culture and our language,” she said.

“When you’re moving from an isolated community of about 300 to 1,000 people to a bigger city, there is a great risk of culture shock and losing your culture.”

Families that are travelling also have access to the Nunavut-funded Ottawa Health Services Network Inc. (OHSNI), which co-ordinates medical travel, access to services, and secures funding through the federal Inuit Child First Initiative.

Adams said the strain caused by medical travel will continue as long as there aren’t enough medical services in the territory.

In a statement this summer, Nunavut’s Ministry of Health said it’s collaborating with CHEO and OSHNI to expand the territory’s pediatric programs with a “care closer to home mentality.”

There are more specialist consultations happening in the territory and medical devices are made available in the community to help children with acute respiratory conditions, according to the ministry.

For some families the disruption of repeated medical travel becomes too much, and they face the difficult decision of placing their children in medical foster care.

Those parents still have all rights to their children and are kept connected and informed, according to a statement from OHSNI.

The Nunavut Department of Family Services says 68 children were in medical foster care in 2020-21. OHSNI said instances of medical fostering have “declined to become a true rarity in recent years.”

Tijay’s father James Sangoya said the family had thought about medical fostering but decided against it. Even a respite stay for Tijay in Ottawa was “unbearable,” according to Tina.

Advocates in the system

Canada’s colonial history has contributed to Inuit mistrust toward the medical community. It’s something Dr. Radha Jetty, medical lead at CHEO’s Aakuluk clinic, saw during her time working as a pediatrician in Nunavut.

“That’s a conversation that we’re having now: that racism is alive and well in the health-care system,” Jetty said in an interview prior to her parental leave earlier this year.

CHEO opened the Aakuluk clinic in 2019 to provide culturally-relevant care and support for children coming from Nunavut and their families as they face the disruption and strain.

“We work very hard to try to provide support to the family to stay here and stay together, or whenever possible repatriate the family. Even under circumstances that care providers wouldn’t normally consider,” Jetty said.

Jetty said medical fostering is among the last options when a child has serious medical needs and their family can no longer cope.

She is concerned about repeating the mistakes of colonial policies as a result of unequal access to care, even if it isn’t the intention of any individual practitioner.

That’s partly why experts advocate for more specialized equipment in Nunavut, and collaborate with northern pediatricians, so they can provide complex care closer to home, Jetty said.

Solutions in the territory

In one case, she said, they were trained and equipped to perform a blood procedure so a child could travel to Iqaluit once a month instead of having to live in Ottawa for years.

“It’s not completely perfect, but it’s much better for the family,” Miners said.

There will always be some need for medical travel in more specialized treatments given the sparse population of the territory, she said.

“My hope for the future is that we could build more capacity within the territory and I’d love to see more Inuit practitioners in the territory. We will never not need our southern partners,” she said.

Miners said telehealth has always been important in Nunavut, but her team was involved in more remote consultations with specialists during the pandemic.

Aluki Kotierk, president of the Nunavut Tunngavik Incorporated, said the COVID-19 pandemic showed medical resources can be mobilized when there’s political will.

“A family should not have to choose between being with extended family and culture and language, and making sure someone gets health-care needs that they require,” Kotierk said. “That it happens is already wrong.”

Kotierk said there needs to be more recognition of Inuit medical knowledge in domains such as midwifery and mobilization of family kinship networks to support delivering services in Nunavut.

When asked on whether services that keep children in community are prioritized through the Inuit Child First Initiative, Indigenous Services Canada said funding is based on a child’s needs as assessed by professionals, and not the services provided.

Tina wants to see more medical services available in Nunavut, in communities like hers.

She said while programs like the Inuit Child First Initiative made it possible for her to get medical and mobility devices for Tijay, she qualifies for other services she can’t get at home.

“If they work now in regards to providing these services in Nunavut, we could eventually see it in 10 to 20 years,” Tina said.

“But at least it would give us a start, instead of watching our Inuit go south,” she said. “Some don’t return, just like how they would with [tuberculosis] relocation or residential schools.”