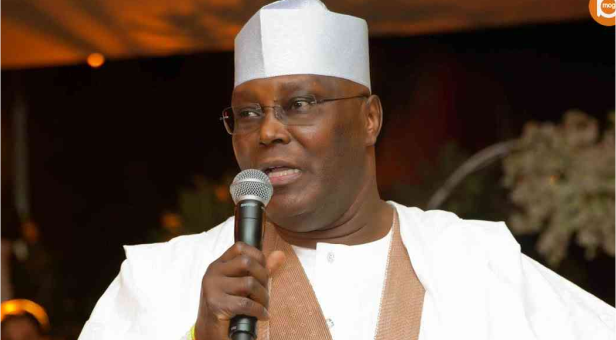 Atiku shared money during a PDP meeting in Delta State. There was serious fight afterwards as blows rained and folks got naked.

Former Nigeria Vice President and PDP presidential aspirant, Atiku Abubakar, doled out wads of Naira notes during a consultative visit to Delta State, and left quite some injured folks begging for more.

The Nation reports that trouble started shortly after Atiku exited the meeting which held at the Delta State government house.

Thereafter “irate youths pounced on the party officials whose duty it was to allocate money to various delegates from the 25 local government areas of the State”.

“The scramble for the money”, the Nation reports “resulted in injuries as security men shot sporadically inside the hall”.

Desperate delegates then snatched huge bundles of money from the bag of Naira notes and made away with others, as everyone gave the other some hot pursuit around the grounds of the Delta State Government House.

There were torn five hundred Naira notes littered round the grounds as desperate youths attempted to escape with a share of the booty.

Security personnel attached to PDP leaders at the event, shot into the air to scare away the youths as the entire ground became a confused mess.

The Nation writes that an unidentified youth who was chased around the grounds, was beaten up by other youths as he tried to escape with wads of Naira notes.

“He was stripped naked and beaten to stupor”.

Even after Atiku left, many youths loitered the place in expectation for more.

According to The Nation “several hours after the ex-vice-President departed the venue, many youths loitered around the grounds hoping for more largesse”.

Atiku will likely be the PDP flagbearer ahead of the February 2019 presidential contest, with President Buhari of the APC in his crosshairs.

On December 3, 2017, Atiki announced his defection to the PDP—a party on whose platform he served as Vice President from 1999 to 2007.