When can kids under 12 get vaccinated? Your COVID-19 questions answered 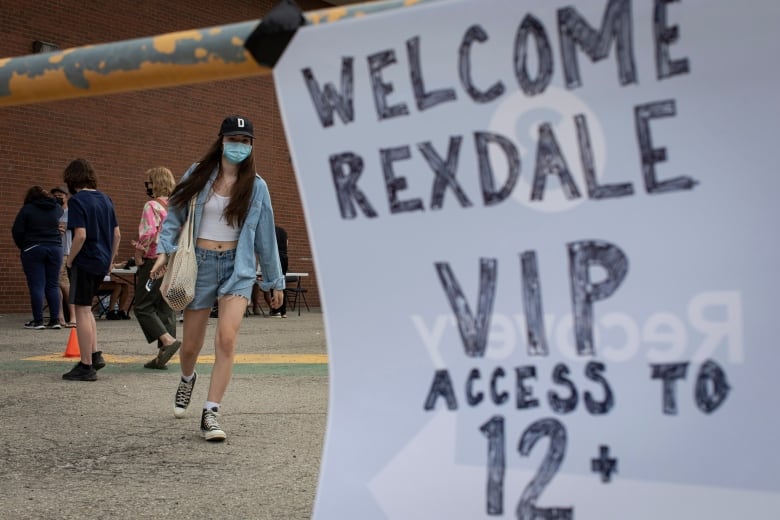 We’re answering your questions about the pandemic. Send yours to COVID@cbc.ca, and we’ll answer as many as we can. We publish a selection of answers online and also put some questions to the experts during The National and on CBC News Network. So far, we’ve received more than 78,000 emails from all around the country and the world.

Canada’s National Advisory Committee on Immunization (NACI) is now recommending the Pfizer-BioNTech vaccine for kids 12 and up, and in some provinces, such as Manitoba, teens can already book their appointments.

Other regions are set to follow suit very soon: young people in Quebec can book an appointment as of next Tuesday, and officials in Newfoundland and Labrador have said they want students 12 and up to get their first shots before this school year ends.

Like anything related to kids’ health, though, the availability of new vaccines has raised questions for many parents. Do they need a smaller dose than adults? And when will there be a vaccine for younger kids? Here’s what doctors have to say.

When will vaccines be approved for kids under 12?

Currently, there is only one COVID-19 vaccine approved for use in Canada for anyone under 18. The Pfizer-BioNTech vaccine is approved for teens 12 and older, but the other three vaccines approved in Canada — Moderna, AstraZeneca-Oxford and Johnson & Johnson — are only approved for people 18 and up.

As for kids younger than 12, several trials are happening to test the effectiveness and safety of existing vaccines.

“Moderna and Pfizer are both going through this, basically to the age of six months, so we’ll see what happens.”

When Pfizer began its trial for children under 12, the company said the data would not be available until the second half of 2021 and that it hoped to see children getting vaccinated in early 2022.

NACI’s chair has also said that a vaccine for younger kids isn’t expected until 2022.

Why are we vaccinating kids and teens, when they’re low risk, instead of giving second doses to people who are more vulnerable?

Protecting the most vulnerable is crucial, she said, but she pointed out that a first dose of a COVID-19 vaccine does provide extremely good protection.

“Giving shots to young people is really something that offers an opportunity to reduce transmission in the community, which would have … a protective effect for everyone.”

Dr. Alex Wong, an infectious diseases expert with the Saskatchewan Health Authority, answered a similar question on CBC News Network. Susan asked: “Why are we forcing seniors to wait four months to vaccinate teens who won’t be back in school until September?”

NACI’s current recommendation is that second doses can be delayed for up to four months so that more people can get first doses while supply is limited.

Wong, who is also an assistant professor with the University of Saskatchewan, pointed out that students are still in school in some provinces. Schools in British Columbia are open and students in Alberta expected to return to classrooms next week.

WATCH / Albertans disagree on whether opening schools is a good idea:

With COVID-19 cases falling in Alberta, the province is resuming in-class learning for most students next week. And while some applaud the move, others worry it’s too fast and could prolong the third wave. 2:04

Wong said that there’s a lot of scientific evidence demonstrating that it’s important for young people to be vaccinated in order to reduce community spread.

He also said that as vaccine supply improves across the country, he expects most seniors won’t have to wait the whole four months. The exact timing will depend on which province or territory you live in.

In Saskatchewan, where Dr. Wong lives, for example, people 85 and older are already eligible to get their second doses, as are people who have health conditions such as cancer. Saskatchewan plans to expand second-dose eligibility between now and late June. Adults 45 and up will become eligible in phases until eligibility opens up to everyone.

Could a COVID-19 vaccine impact a child’s fertility in the future?

Jillian wrote in to ask this question, which Wong answered.

He said there’s a lack of data on the long-term effects of these vaccines, but noted they’ve been given to pregnant people and people of child-bearing age without causing adverse effects.

“There have been no concerns thus far with regard to concerns like fertility or sterility … so there’s no real reason at this point to believe that COVID-19 vaccines would cause a problem like that, either in the short term or the long term,” Wong said.

“That wouldn’t be a reason I think, for us to worry about our kids getting vaccinated. I would definitely go and get it as soon as possible.”

Do kids and teens get the same dose as adults?

How can the Pfizer dose be the same for children as it is for adult males who weigh 250 pounds? This question came from Linda.

“The vaccines have been studied with the dosings we have in place.”

The Pfizer-BioNTech trials used the same dose size and two-dose regimen with adolescent participants as was authorized for use in adults, Dr. Supriya Sharma, the chief medical adviser at Health Canada, said while announcing the authorization on May 5.

That means two doses of 0.3 mL vaccine, according to Pfizer’s product monograph.

“We pick a dose of vaccine that is large enough for the largest or the heaviest people to get a good reaction but not so large that people get adverse events,” Dr. Allison McGeer, a medical microbiologist and infectious diseases specialist at Toronto’s Mount Sinai Hospital, said in an earlier interview on CBC News Network.

Send your questions to COVID@cbc.ca or leave them in the comments.