Bank of Canada reminds us of more things to worry about 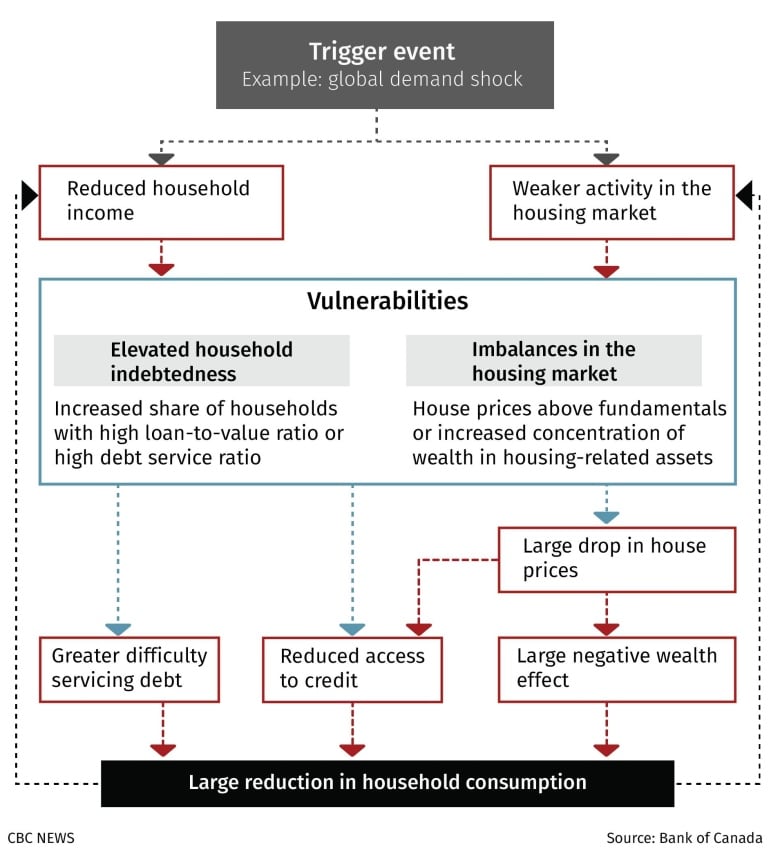 Whether you are a teacher, a student, a medical professional or just coping with the COVID-19 crisis in your daily life, there are frequent reports about how the pandemic is increasing our levels of anxiety.

Rather than trying to add to our troubles, the Bank of Canada’s latest report on Canada’s financial vulnerabilities is intended to help us avoid some major ones. And what the bank’s governor, Tiff Macklem, outlined at a news conference on Thursday was not what will certainly go wrong, but what could go wrong if we’re not careful.

“The biggest domestic vulnerabilities are those linked to imbalances in the housing market and high household indebtedness,” Macklem told reporters. “These are not new, but they have intensified.”

The Bank of Canada governor has plenty to keep him awake at night. The report was not just about housing.

Macklem also worries Canadian businesses may have become too used to cheap borrowing in the bond market, something that could end without anything to replace it. He frets that investors have failed to account for what climate change could do to the price of their assets. He is concerned about cybercrime. Also, the rising Canadian dollar and how it could hurt exports.

Serious damage, and not just to borrowers

But the big worry this time was real estate. The message was clear, if sometimes couched in central-bank-speak. If people don’t stop bidding up the price of houses, Canadians are already so loaded with mortgage debt that an unexpected change in the market could do serious damage not just to “overstretched” borrowers with enormous loans, but to the entire economy.

That’s why the first and biggest risk outlined by the bank in its report was “a large decline in household income and house prices” caused by an external trigger event. It is hard to be sure what form such a trigger event could take. Macklem referred at one point to a “sharp repricing of risk.” Such an event might lead to, say, a sudden rise in global interest rates, a stock market crash or a weakening of global trade. Maybe even the collapse of bitcoin.

As the Bank of Canada illustrated in the graphic below, once triggered, already high levels of indebtedness could have a circular impact, pushing house prices down, reducing incomes and spreading through the entire economy.

Asked if he was responsible for inflated house prices by keeping interest rates too low, Macklem offered a warning: “Interest rates have been very low, and at some point they are going to go back up.”

While he thinks this week’s high inflation rates are temporary, he made it clear that if inflation does not come back down on its own, the bank is still committed to pushing it back to the two per cent range. That could mean even higher rates.

Although it is the Office of the Superintendent of Financial Institutions (OSFI), not the Bank of Canada, that imposes “stress tests” designed to limit the amount people can borrow, the two bodies work closely together.

Shortly after Macklem’s news conference, OFSI put out a news release of its own confirming that as of June 1, the agency would go ahead with a plan to make it harder to get a loan. Borrowers will have to prove they have the income to pay a minimum of 5.25 per cent interest, even if their lender offers a much lower rate.

That is not a plan that will satisfy everyone, including the many young families that Macklem said send him letters each week saying they have been squeezed out of the housing market.

But they would likely be even more disappointed if the current frenzy to buy a home led to what the Bank of Canada report refers to as “a correction in prices in the future,” potentially leading to the vicious circle described above.

Despite his warnings, Macklem was not entirely gloomy. He pointed to the fact the Canadian economy had proven itself resilient in the face of widespread COVID-19 restrictions and lockdowns.

“Vulnerabilities need not lead to serious problems,” the central banker told the online gathering of reporters. “Some will work themselves out before bad things happen.”

But with so much at stake, including the health of the Canadian property market and all the jobs it supports, hoping for the best really isn’t enough.

“The lesson from history is that if left unchecked, vulnerabilities can lead to calamities,” Macklem said.

Asked what else he could do besides hiking interest rates to slow down the property market, Macklem did not mention the very thing he did yesterday: he can try to scare the bejesus out of us.