What’s the Key to Raising Teens Who Won’t Rebel? 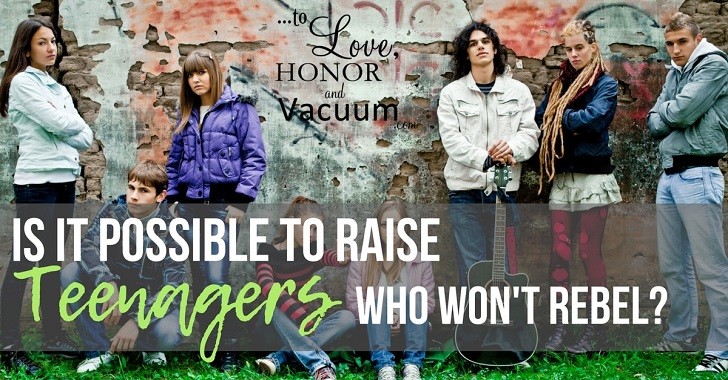 Have you ever wondered how to raise teens who won’t rebel? Is it even possible?

Rebecca here. That’s the question I asked in a blog post three years ago. That blog post, Why I Didn’t Rebel, went viral. And it changed my life.

Now, three years later, I’ve written a book on the subject, and it’s coming to bookstores on October 3rd!

After the response from that blog post, I knew that if I was making this into a book, I had to do it well. It couldn’t just be my story–I wanted to cover a lot more than just that.

So I interviewed over 30 millennials, age 18-27, who did and who did not rebel in their teenage years. Then, coupled with psychology and sociology research, I found some patterns.

But one thing I never expected to find was this: of the kids who rebelled, all but one said that their biggest regret was that they weren’t close to their parents.

Yes, they were sad about the mistakes they made. Some had their hearts broken by sleeping with people who weren’t worthy of them. Some regret years of heavy drinking and experimenting with drugs. But that wasn’t what they regret the most. Instead, it was missing out on the relationship with their parents they feel that they’ll never really have–but might have, if things had been different.

Kids who didn’t rebel, however, didn’t face this problem.

So what makes these families so different?

Well, I wrote a whole book on it. But in one word: authenticity. Families with kids who didn’t rebel weren’t afraid to just be themselves. Yes, that sounds wishy-washy, but hear me out.

Families with rebellious kids were so scared of rebellion that they focused a great deal of their energy trying to prevent it. But in the midst of all of their rules and punishments and forced family dinners, something happened–they became unapproachable.

See, when you focus on fear of rebellion, it’s easy to let your relationship be controlled by that fear.

Hailey’s mom was so scared she was doing something wrong she started seeing disobedience when she wasn’t even doing anything bad yet!

Nathan’s family would punish even slight disobedience with harsh punishment–forgetting to clean his room would mean he couldn’t go on a summer trip to see friends he rarely got to visit. Although he recognized that he was in the wrong, the severity of the punishment made him feel that his mom didn’t understand him as a person. And his relationship with her suffered as a result.

Courtney lived in a family with untreated mental illness that no one ever talked about. Misunderstanding her family members’ experiences, she moved out at only 16 years old, believing her family would be better off without her.

In families where we didn’t rebel, though, it was very different.

Our parents weren’t afraid of our behaviors, even when we screwed up. Instead, they focused on getting to know us as people, and on letting us get to know them, as well. They admitted their faults, we talked about the hard issues, and we didn’t have strict punishments in the same way–even when we deserved them.

Parker’s family, instead of expecting that their daughter was going to rebel, knew their children and expected them to make good choices, instead of defaulting to fear of disobedience.

Rachel’s family, instead of creating harsh rules to try and control her behavior, would ask her what she thought the rules would be. For example, instead of saying, “you’d better be home by 10:00 or you’re grounded, young lady,” they’d ask, “Well, you have a test in the morning, so what time do you think you should be home?” Rachel hated it, but it taught her to make good decisions for herself.

When parents focus on bad behavior too much, fear starts to get in the way of relationship.

Families with kids who didn’t lived in authenticity. They chose to live in hope, not fear, getting to know their kids personally instead of dictating their behavior. They cared more about their kids’ walk with Christ than about how they appeared to others. And they understood that a power struggle is never a solid foundation for a good relationship, and so maintained authority without setting up a dictatorship.

So, after researching this for a year and a half, I’d say this:

Don’t be so scared of rebellion that you forget to know your kid in the process.

Your kids need you. Not all the gimmicks.

Do you have any questions at all about how to raise teens who won’t rebel?

My mom, Sheila, is doing a Q&A with me as the final chapter in the book for pre-order customers! If you order the book before October 3rd, you’ll get an edition with the Q&A.

But we need questions!

Is there anything at all you’ve ever wondered about raising healthy teens? Doesn’t matter how weird it is, let us know in the comments and it may be featured in the book! (And if it’s not in the book, there’s a good chance it’ll be covered in a webinar or even on the blog sometime soon!)

And I just wanted to say one more thing: a great big thank you to everyone who’s read that initial blog post! You have truly made a dream come true, and I never would have been able to write this book without all of your encouragement those first few weeks! You have changed my life, and I’m not just saying that. So thank you a million times!

Interested in getting your copy of Why I Didn’t Rebel?

Why I Didn’t Rebel is available for preorder! Check it out:

Through the Thomas Nelson websiteIt’s on Amazon!

Got any questions on raising healthy teens? Leave them below!