Water shortages are a major risk of climate change. Alberta may already be seeing warning signs 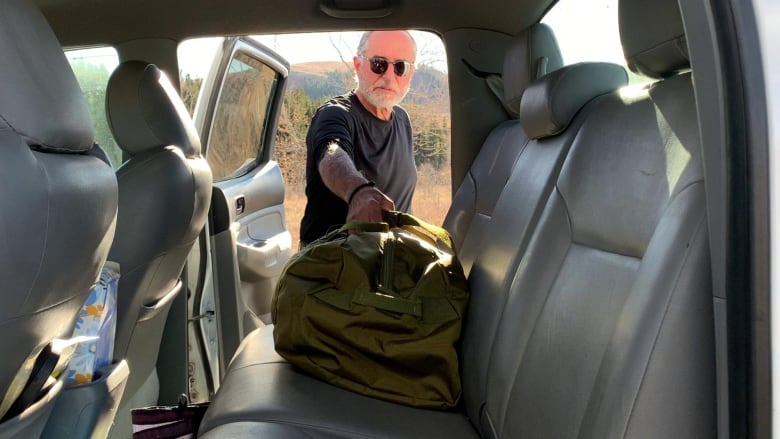 Our planet is changing. So is our journalism. This story is part of a CBC News initiative entitled “Our Changing Planet” to show and explain the effects of climate change and what is being done about it.

At a quiet, isolated section of the Oldman River in southwestern Alberta, it’s a calm day. In this corner of the province, extremely strong winds can sometimes spoil outings to the river — but today, it’s tranquil.

That’s exactly how local resident and fly fisherman Bob Costa likes it. An angler for around 40 years, Costa has long sought the refuge of fishing, whether solo or with a companion.

“It’s an environment that has always caused me to find peace. Peace and relaxation,” Costa said. “I would hate to see that disrupted.”

In this section of the Oldman, Costa explains, there’s a great deal of structure. There are rocks on the dry bank and in the river itself. And the more cover you have, the greater the chances of finding fish like rainbow trout, bull trout and cutthroat trout.

But this year, Costa said, he’s been seeing some of the lowest flow rates on the river he can ever recall.

“The river finds its way lower and lower and lower,” Costa said. “In fact, to the point that as low as it is now, I won’t even fish it. Because the fish are too stressed, and they’re in oxygen debt.”

What’s happening in this section of the Oldman River comes as no surprise, experts say, and the effects of climate change could lead to water shortages across Alberta in years to come.

“We’re already in the climate catastrophe era,” said James Byrne, a geography professor at the University of Lethbridge who has studied climate change for more than 30 years.

No part of the globe or this country is immune from the effects of climate change.

But Canada’s Prairie provinces could be particularly hard hit, experts say, due to the fact they are among the highest industrial and commercial users of water in the country, partly because of the agricultural sector.

In dry southern Alberta, the agricultural sector relies on irrigation — the process of watering crops artificially instead of relying on rainfall.

Last October, the provincial government announced Alberta’s irrigation system would receive an $815-million upgrade, which would be used to bury canals, add 208,000 acres of irrigable land and expand storage.

The use of water in the southern part of Alberta is restricted. New licences for water can’t be issued; they must be purchased from existing licence holders.

But even the current allocation of water licences in southern Alberta could come under stress due to extreme weather variability, said University of Lethbridge geography professor Stefan Kienzle, who created an interactive website that lets Albertans explore how the climate is changing.

“We have allocated 100 per cent of our water. We cannot allocate any more,” Kienzle said. “The biggest threat facing southern Alberta is multi-year droughts … maybe the [irrigators] can get away with scraping by two years.

“But if you have a drought that is longer than two years, you are done. Irrigation is done. The productivity is done. We will all scramble for water as municipalities and industries to keep our faucets going.”

Alberta experienced record-breaking temperatures this past summer, with scorching heat above 35 C for days.

Several provincial municipalities declared agricultural disasters due to drought, and livestock producers struggling to feed their cattle were forced to sell herds into a depressed market.

Agriculture, of course, is a key driver of Alberta’s economy, contributing $9.2 billion to the province’s GDP in 2019.

Jason Nixon, Alberta’s minister of environment and parks, said the province’s licensing program would allow it to react in the potential scenario of water shortages.

In addition, Nixon said, the province has water leaving its boundaries that it is entitled to, meaning there is additional water still available within the system.

“That said, we recognize how precious the basin is, which is why it’s a closed basin. We continue to monitor it accordingly and adjust,” Nixon said.

The focus right now, he said, is on continuing to upgrade irrigation systems in southern Alberta.

“[That way], we’ll be able to make sure we are able to utilize all the water resources that we have.”

Nixon cited this year’s drought conditions as an example of the province’s capability to adjust to shortages.

“As time goes on, we will of course have to make adjustments to [the Oldman River basin], to make sure it can do its No. 1 job, which is to make sure we can provide habitat for important species like westslope cutthroat, as well as drinking water for people of southern Alberta.”

Last fall, a government presentation given to municipalities and acquired by CBC News proposed changes to water allocations in the province’s arid southwest. The presentation included details that would have removed sector barriers for industrial users such as coal producers.

In March of this year, Nixon said there were no plans to make those changes.

WATCH | The crucial role of glaciers in maintaining Alberta’s supply of water:

Melting ice and glaciers could lead to water crisis

A new study finds that ice is disappearing around the globe at an alarming rate and glaciers represent a significant amount of ice loss. Researchers in Canada say the retreat of glaciers will have major impacts on water security in Canada. 2:51

On Monday, Nixon said no water allocations are being increased for any coal or industrial activity on the South Saskatchewan Basin, particularly in the Oldman region.

“There is limited water resources within that area. There will be no new allocation or licences made available for any industry inside the Oldman basin, and any projects would have to work within the existing water framework,” he said.

This summer, the federal government rejected the proposed Grassy Mountain coal project in southwestern Alberta, nearly two months after a review panel denied a provincial application for the project, citing the effects on surface water quality and the threatened westslope cutthroat trout.

The company behind the project, Benga Mining Limited, is appealing that decision.

But in southern Alberta and elsewhere across the province, it’s the combined weight of human activity that is taxing an already limited water supply, said Katie Morrison, conservation director with the southern Alberta chapter of the Canadian Parks and Wilderness Society (CPAWS).

Heavy forestry, motorized recreation and industrial use are having a big impact on the resource, Morrison said.

Coal mining in source-water areas in other parts of the province also uses a lot of water and poses a risk of water contamination, she said.

“All of those things together … are really placing a stress on this resource that is one of our most valuable resources in the province.”

What’s to be done?

Byrne, the geography professor at the University of Lethbridge, said now is the time to transition Alberta’s economy toward renewable energy.

“If we don’t redevelop our economy to take advantage of renewable energy, then we’re going to see a decline in our economy,” he said.

“So there’s less money for everything. We just can’t afford the things we have. So that’s tax increases, that’s cuts in services. We don’t want our economy to slide because of water shortages.”

Less than an hour north of Lethbridge is Lismore Farms, a mixed irrigation and dryland operation. Dryland farming refers to the growing of crops without the use of irrigation in dry areas.

It is at operations like these where drought conditions and water shortages are not just problems discussed hypothetically.

Owner Malcolm MacDougall said yields from the farm were very poor this year. In a typical year, the farm would see 50 bushels per acre of wheat crops. This year, the farm saw five to eight bushels to the acre on the dryland.

“Take 70 to 80 per cent off your paycheque and see how you get through the next year,” MacDougall said. “It’s pretty bleak.”

All told, MacDougall said, this year was by far the worst in the 37 years he’s been working on the farm.

Southern Alberta is no stranger to drought conditions. MacDougall himself went through the droughts of the 1980s, and he’s hopeful next year will be better.

“I’ve been around for some of those really bad ones,” he said. “My dad used to say, ‘When Noah built the arc, and it rained for 40 days and 40 nights, this area got half an inch.'”

Caitlin Hanrahan, an associate professor in the department of geography and environment at the University of Lethbridge, said there is evidence of what is to come in the hot, dry, smoky summer experienced across the Prairies.

“In Canada, about 70 per cent of water sources are glaciers and ice caps, and these are melting. So we’re going to have less water in the future, and we’re all going to feel it.”

CBC Calgary has launched a Lethbridge bureau to help tell your stories from southern Alberta with reporter Joel Dryden. Story ideas and tips can be sent to joel.dryden@cbc.ca.

What would news coverage look like if every Lethbridge resident was welcome to help shape it?

We’ve launched an experimental outreach effort for Lethbridge and area residents. If you’re in the area, join our Lethbridge Bureau texting community to help in this experiment.