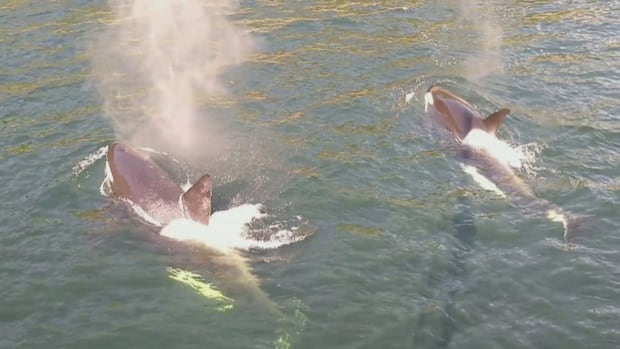 A Squamish, B.C., man has a whale of a tale after a close encounter with Howe Sound orcas caught on camera.

Bradford McArthur was on a sailboat last week when a pod of killer whales swam around and underneath the vessel, including one with a freshly caught seal in its mouth.

“They’re really far away, and I’m like, is that a porpoise?” McArthur recounted. “And then we got a little closer. We’re like, holy cow, those are orcas!”

While the orcas had their catch, McArthur had a catch of his own when he snagged the whole encounter in stunning video.

The whales splashed about and jumped out of the water, mere metres away from him and others on the sailboat.

Watch the whales with their kill:

A day spent sailing on Howe Sound ended with an unforgettable whale sighting. 0:47

A rare encounter like that might be the highlight of most people’s weeks, though McArthur says he has seen the animals close up before.

But he got engaged a short time before the encounter. The sailboat trip was a celebratory one along the Pacific shoreline with his fiancée’s family.

“I think because of the family and the fact they were this close, it was probably the best orca experience I’ve ever had,” he said.