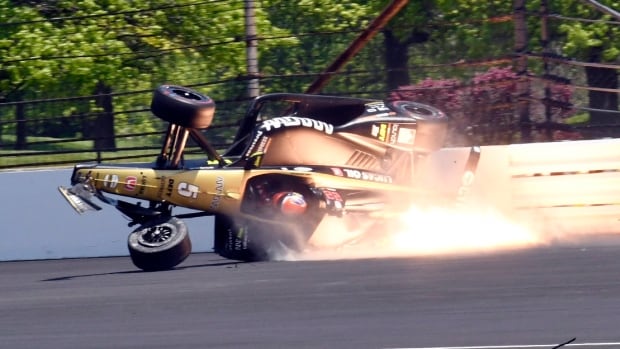 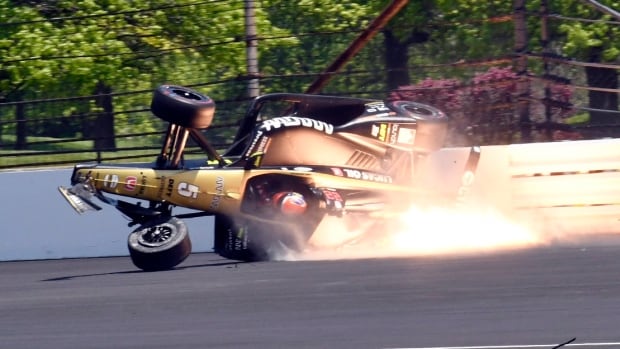 James Hinchcliffe, of Canada, slides into the backstretch after hitting the wall along the second turn during qualifications for the Indianapolis 500 IndyCar auto race at Indianapolis Motor Speedway, Saturday. (Greg Huey/The Associated Press)

James Hinchcliffe spent 12 months plotting his Indianapolis 500 comeback, but the final chapter has been put on hold for at least one more day — possibly another year.

Hinchcliffe crashed during his first qualifying attempt Saturday and then couldn’t find enough speed in his backup to bump his way into the protected top 30 starting positions for “The Greatest Spectacle in Racing.”

His final shot to make the 33-driver field is Sunday when six drivers, including two-time Formula One world champion Fernando Alonso, will go for three spots in the “Last Row Shootout.”

“Luckily we’ve got a chance,” Hinchcliffe said. “With the amount of time we had to get this thing together, there are some little tricks of the trade where I think we can find some speed. It’s weird to think this isn’t actually the worst qualifying day we’ve had here.”

Hinchcliffe was able to walk away uninjured from a scary looking crash on Saturday during qualifying for the Indy 500. 0:24

That was last year when he was surprisingly bumped out of the 33-car starting field and missed the race.

Hinchcliffe and his team huddled after last year’s miss to figure out what went wrong and made what they thought were the necessary contingency plans to avoid a similar fate this year. So following the crash, the Arrow Schmidt Peterson Motorsports crew got right to work.

Rather than repair the No. 5 car that suddenly snapped around and slammed hard into the outside wall, the team pulled out the backup car and installed a new engine — starting even before Hinchcliffe had climbed out of the car and gone the medical centre to be cleared to drive.

In less than two hours, the team had the car back in line for technical inspection.

“We had this spare car all ready to go sitting here, pretty turn-key,” team co-owner Sam Schmidt said. “This team is very resilient. It has been these last three or four years on many levels. They’re fighters. Before the safety guys were to the car, this group was already pounding on the backup car.”

But now Hinchcliffe finds himself in a frighteningly familiar scenario.

The six slowest drivers from Saturday will each have once chance to fill the final three starting spots for the May 26 race.

Hinchcliffe couldn’t find enough speed Saturday and backed off his first attempt in the rebuilt car. He failed to qualify on his final two attempts, too.

“It [the track conditions] just swapped ends on me,” Hinchcliffe said, explaining the crash. “Gust of wind. When it’s gusty like this and you’re in low down force qualifying trim, these things can happen and unfortunately it caught us today.”