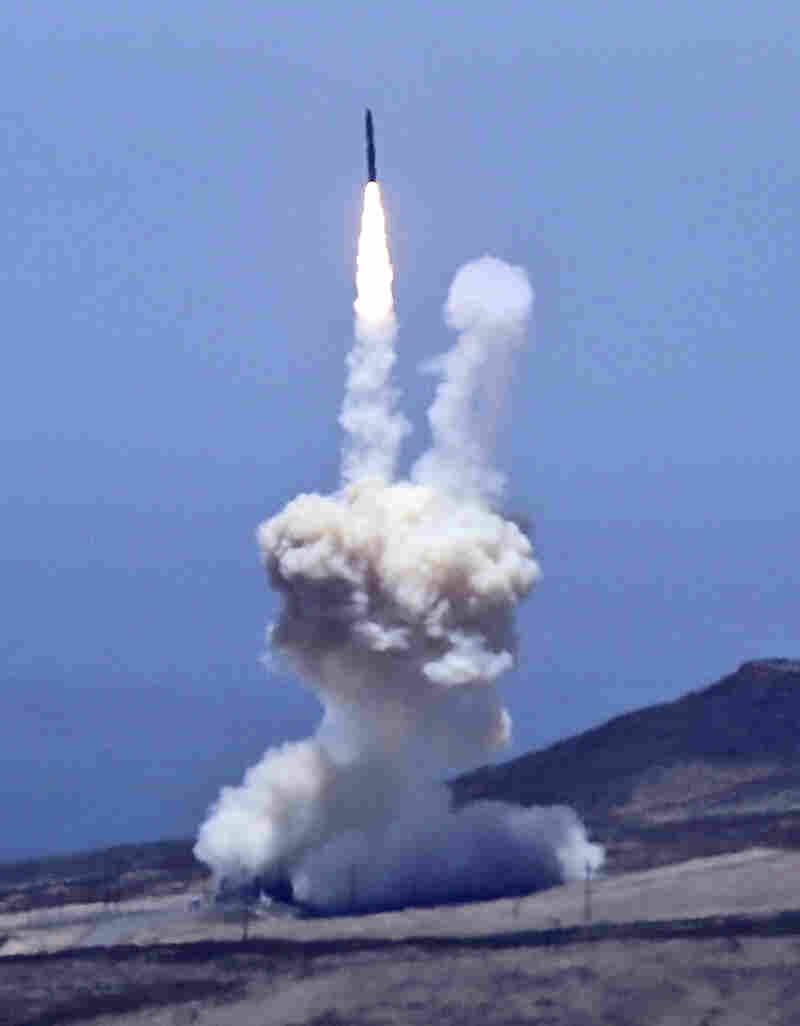 An rocket designed to intercept an intercontinental ballistic missile is launched from Vandenberg Air Force Base in California on Tuesday. The Pentagon says it shot down a mock warhead over the Pacific in a success for the U.S. missile defense program. Matt Hartman/AP hide caption

An rocket designed to intercept an intercontinental ballistic missile is launched from Vandenberg Air Force Base in California on Tuesday. The Pentagon says it shot down a mock warhead over the Pacific in a success for the U.S. missile defense program.

The Pentagon announced it has staged a test in which the military shot down a missile similar to the type that North Korea could someday use to threaten the United States.

NPR National Security Editor Philip Ewing reports for our Newscast unit on how the test was conducted:

“First, a missile target took off from an island in the western Pacific.

“Sensors on the ground picked it up and guided an interceptor that blasted off from California. The military says that missile struck the target outside the Earth’s atmosphere in what the Pentagon called ‘a direct collision’ — and destroyed it.

“The track record of the ballistic missile defense system in these tests is mixed, but the Pentagon says the hit shows that it’s making progress.

“Defense and intelligence officials warn that North Korea is making progress toward threatening the U.S. with a nuclear-tipped ballistic missile — although they won’t say when.”

This test was the first time a ground-based midcourse interceptor has destroyed an intercontinental ballistic missile target.

The test record for U.S. ballistic missile defense systems is mixed — before Tuesday, nine of 17 attempts by a system like this since 1999 have been successful.

The Navy’s Aegis BMD system — in which a warship at sea launches against the ballistic missile target — has a better record, with 35 successful intercepts of 42 attempts, according to the Missile Defense Agency.

The test conducted by troops of the 30th Space Wing at Vandenberg Air Force Base cost $244 million.

Philip E. Coyle is a former head of the Pentagon’s test and evaluation office and a senior fellow at the Center for Arms Control and Non-Proliferation. He tells The Associated Press, “In several ways, this test was a $244 million-dollar baby step, a baby step that took three years.”

Defense and intelligence leaders warn that it’s only a matter of time before North Korea can miniaturize a nuclear weapon and put it onto a missile that might be able to reach the United States, although they will not say how long they believe that might take.

The North continues a program of testing missiles and developing nuclear weapons.

That’s why missile defense advocates argue the U.S. must continue working on a system that can defend American allies in Asia and North America against potential launches; program critics argue it’s a boondoggle whose failures have already proven it can’t be trusted in the event of a crisis.