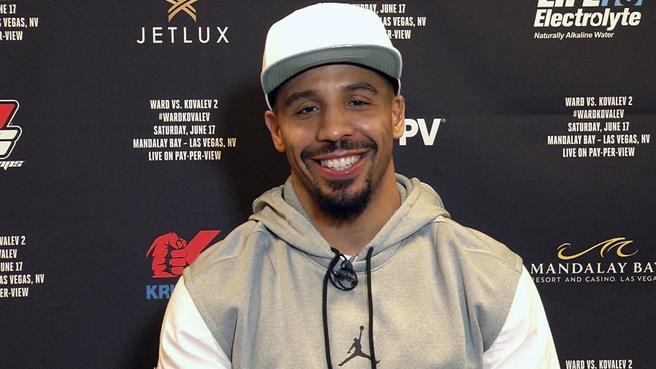 LAS VEGAS — Whatever doubts there were after Andre Ward was handed a highly controversial unanimous decision and three light heavyweight world title belts following his November showdown against Sergey Kovalev, there were none remaining Saturday night.

The pound-for-pound elite fighters met again in a rematch before a crowd of 10,592 at the Mandalay Bay Events Center, and Ward left no doubt this time, knocking Kovalev out in the eighth round, much to the delight of the pro-Ward crowd.

Kovalev was known as the big puncher of the pair, so it was a satisfying conclusion for Ward, who unleashed some firepower on the “Krusher” in the final moments of the fight against an opponent who had promised to knock him out and end his career.

Ward had landed several hard body shots that Kovalev visibly reacted to. Ward said he noticed that and continued to go downstairs.

“I’ve never been the best, but I’ve always worked the hardest,” Ward said. “I could tell he was reacting to my body shots, and I knew I had him then. I knew he was hurt. It takes something to do something.”

It had been a competitive fight until the eighth round, when Ward landed a ferocious right hand on the chin and Kovalev turned jelly-legged. Kovalev (30-2-1, 26 KOs) was badly hurt, and Ward went right at him and began firing away.

Ward (32-0, 16 KOs) backed him into the ropes and landed three more left hands to Kovalev’s gut, including a low blow that was not called by referee Tony Weeks. But the shots forced Kovalev to bend over, and he looked spent, so Weeks jumped in and waved off the fight at 2 minutes, 29 seconds.

Andre Ward, left, was ahead 67-66 on two scorecards while Sergey Kovalev led 68-65 on the third going into the eighth round. Ward improved to 32-0 and recorded his 16th knockout. Christian Petersen/Getty Images

“I saw him reacting to body shots that were borderline, so I knew I had him,” Ward said. “I knew he was hurt, trying to cover up. I went back to the body. I went right back there again, and he wasn’t reacting. Then the referee stopped the fight.”

After the fight, Main Events CEO Kathy Duva, who promotes Kovalev, said she will file a protest with the Nevada State Athletic Commission, claiming Ward landed several low blows without being penalized.

“I’m still having a hard time processing what I just witnessed,” Duva said. “I saw someone who should have been disqualified get his hand held up. [Kovalev] got hit with three low blows, four actually, in the last round. We asked the commission for an instant replay analysis, and they did not give it to us. We’ll file a protest on Monday.”

Virgil Hunter, Ward’s careerlong trainer, was satisfied with the outcome.

“I told [the media] this week I have only trained Andre for a knockout twice,” Hunter said. “The first was Chad Dawson [in 2012], and the second was tonight. And they laughed at me. But I knew what was going to happen, because he was healthy. Now we have quieted all those who were whining and thought we didn’t get it the first time.”

On Nov. 19, Ward won a heavily disputed decision — 114-113 on all three scorecards — against Kovalev, who had the right to an immediate rematch, an option he quickly exercised. Ward came on strong in the second half of that fight after Kovalev knocked him down in the second round.

It led to bitter feelings on both sides — Kovalev feeling he was robbed, and Ward feeling he got no credit for the victory. It spilled over into an acrimonious buildup to the rematch, but Ward let it go after Saturday’s fight.

“He’s a good fighter, and I have nothing but respect for him,” he said. “First time around, the man is world champion, and he’s been on top a long time. I give him credit. He is a great fighter, and when you fight great fighters, you have to raise your game.”

This time there was no early knockdown and no early dominance from either man, but there was a conclusive outcome.

“From Day 1 I predicted a knockout,” said Michael Yormark, Ward’s promoter from Roc Nation Sports. “I said Andre was in the best shape of his life and that he was as motivated as he has ever been for a fight in his life. He landed incredible body punches and chopped Sergey down, literally chopped him down.”

Kovalev seemed in shock after the fight.

“I don’t know. I can’t explain it,” Kovalev said about the end of the fight. “Not every round, but I thought I was doing very good. I was better, and he was better this fight. I didn’t feel like I was getting knocked down with his punches.”

He said he thought Ward was hitting him below the belt but that he was OK.

Andre Ward said he hopes his second victory over Sergey Kovalev in as many fights will move him to the top of pound-for-pound lists. Ethan Miller/Getty Images

In the second round, Kovalev just missed with a big right hand and then grazed Ward with a left-right combination — just before Ward landed a low blow and was warned by Weeks. Ward continued to go to the body in a fight that featured a lot of rough stuff, some head-butts and grappling. At one point in the fourth round, Weeks called the fighters together and warned them to knock off the fouling.

There were several close rounds, and going into the eighth, Ward led 67-66 on two scorecards and Kovalev, 34, who is from Russia and fights out of Los Angeles, was up 68-65 on the third. But Ward, 33, of Oakland, California, made the cards irrelevant with his surprising TKO in the eighth round, after which Hunter and Kovalev trainer John David Jackson got into a heated discussion in the ring.

Many already view Ward as the No. 1 pound-for-pound fighter in the world, but it is nowhere near unanimous. Ward hopes he made his case this time.

Kovalev said he hoped to have a third fight, but that is quite improbable, given the terrible rancor between Roc Nation Sports and Kovalev promoter Main Events, not to mention that the first fight was not a commercial success and the rematch was not likely to be one, either.

Ward made $6.5 million, and Kovalev stood to earn a fraction of that because he was getting only a percentage of the pay-per-view and ticket sales. HBO will replay the pay-per-view fight next Saturday beginning at 10 p.m. ET/PT.

Ward could pursue lineal light heavyweight champion Adonis Stevenson, who owns the fourth sanctioning body belt, but there are promotional and television network issues there, so don’t count on seeing it.

Asked what he would do next, Ward said, “Cruiserweight? Heavyweight? I dream big, and everything is possible when you have God.”

Yormark said he would give Ward time to enjoy the win and then look for the biggest fight available.

“This performance was spectacular, probably one of the best we’ve seen in a long, long time, and he finished [Kovalev],” Yormark said. “We’re very proud of him. A great night for the Wards. He was so spectacular tonight. He realizes he is the best fighter, pound for pound, in the world. Who he fights next? Who knows? He will enjoy the moment. He deserves to enjoy the moment.”