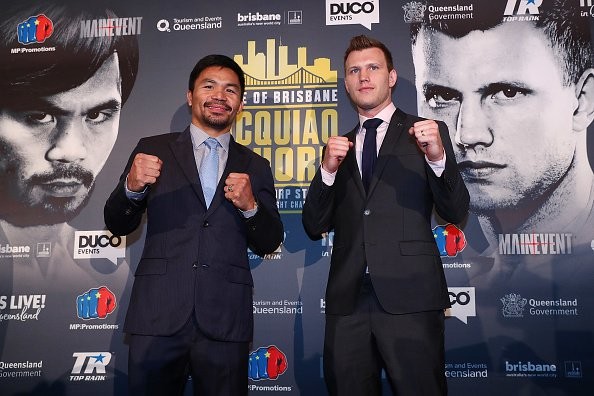 Manny Pacquiao, one of the biggest stars in boxing history, is coming to ESPN.

The Filipino legend’s welterweight world title defense against Jeff Horn, along with the rest of the card, will air live on ESPN beginning at 9 p.m. ET on July 1 from Suncorp Stadium in Brisbane, Australia, after promoter Top Rank and the network made a deal.

It will be the first time that a Pacquiao fight will air live on basic cable and his first non-pay-per-view fight since he knocked out Hector Velazquez on HBO in September 2005.

“Working with Top Rank on a match normally seen on pay-per-view is a significant moment for ESPN and for boxing fans,” ESPN President John Skipper said. “This fight, along with ESPN’s in-depth programming surrounding the fight, joins Wimbledon, Home Run Derby and the ESPYS in a stellar early July programming lineup.”

Manny Pacquiao will fight live on basic cable for the first time in his career when he takes on Jeff Horn on July 2 in Brisbane, Australia. The fight will air live on ESPN at 9 p.m. ET July 1. Isaac Brekken/AP Photo

The approximate 3½-hour telecast will also air live on ESPN Deportes and stream live on the ESPN App. The fight will take place during Sunday afternoon July 2 Brisbane time, but the 14-hour time difference from the United States’ East Coast allows for a live prime-time telecast.

Top Rank chairman Bob Arum, whose Top Rank Boxing series was a staple of ESPN programming from the 1980s through the mid-1990s, said he was excited to make the deal.

“The world has followed amazing Manny since he burst onto the scene in his U.S. debut in 2001, where he knocked out Lehlo Ledwaba to win his second of a record eight division world titles. We are excited that ESPN will air this fight throughout the U.S. in both English and Spanish. It’s going to be an unbelievable event,” Arum said.

ESPN’s coverage of “The Battle of Brisbane” will begin June 30 with live SportsCenter coverage of the Pacquiao-Horn weigh-in during the 7 p.m. ET telecast. Also, during the week of June 26, there will be several classic Pacquiao fights — Ricky Hatton, Juan Manuel Marquez III and Bradley II — available on demand and streaming via the ESPN App.

The fight-night telecast will kick off with a preview show and include middleweight Shane Mosley Jr. (10-1, 7 KOs), 26, of Pomona, California — the son of former three-division world champion Shane Mosley — taking on Australia’s David Toussaint (10-0, 8 KOs) in an eight-round fight.

Then junior bantamweight Jerwin Ancajas (26-1-1, 17 KOs), 25, of the Philippines, the first world titleholder promoted by Pacquiao’s MP Promotions, will make his second defense of his 115-pound crown against Teiru Kinoshita (25-1-1, 8 KOs), 31, the mandatory challenger from Japan, in the co-feature, followed by Pacquiao-Horn.

Pacquiao (59-6-2, 38 Kos), 38, who is also a sitting senator in the Philippines, regained the welterweight world title belt he lost to Floyd Mayweather when he knocked Jessie Vargas down in the second round and cruised to a unanimous decision in November. He will be making his first defense against Brisbane’s Horn (16-0-1, 11 KOs), 29, a former school teacher and 2012 Australian Olympian.

“Manny Pacquiao has been one of the biggest global sports stars of his era, setting attendance and pay-per-view records for over the past decade,” said Top Rank President Todd duBoef. “Now, as he defends his world title in front of yet another anticipated record crowd, he will be doing it to his biggest U.S. television audience on the world’s biggest and most prestigious sports network, ESPN. To have ESPN, which has treated its viewers to NFL, [the] College Football Playoff and NBA playoff games, add Manny’s title fight to its roster is the biggest compliment one can give to Manny’s star power and a great gift to sports fans.”

Horn might not be a well-known figure outside of his home country, but the fight has taken Brisbane by storm. Suncorp Stadium officials have secured an exemption to increase seating to 60,000 for the fight. There have already been approximately 50,000 tickets sold, meaning it has surpassed the Australian boxing attendance record of 38,000 that turned out at Princes Park Football Ground in Melbourne for then-junior lightweight champion Azumah Nelson’s eighth-round knockout of Australian legend Jeff Fenech in the 1992 rematch between Hall of Famers.