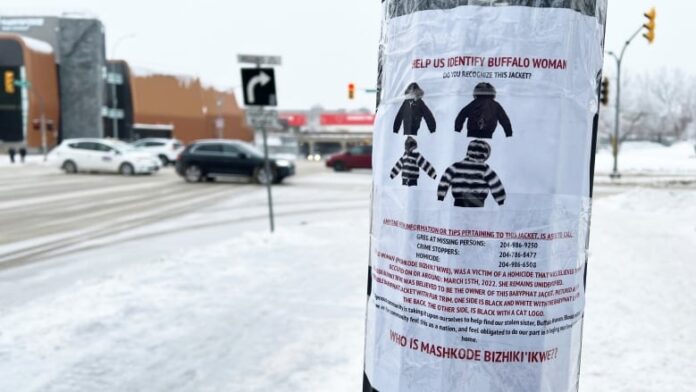 A grassroots team set out at nine o’clock sharp on New Year’s Day, walking southbound on Main Street, with about 300 posters in hand: “Help us identify Buffalo Woman,” is written in red capital letters. “Who is Mashkode Bizhiki’ikwe?”

Darryl Contois and George Robinson led the initiative Sunday, taping posters to poles and speaking to people on the street and in encampments. They are gathering tips from the community in the hope that this year will bring answers about the woman police believe was the fourth victim of alleged serial killer Jeremy Skibicki.

“We’re trying to bring closure to somebody’s family and let them know that there are people that are in Winnipeg that care,” Contois said.

“Everybody deserves to come home.”

Community members gave the slain woman the name Mashkode Bizhiki’ikwe (Buffalo Woman) after police were unable to identify her. Police have said they don’t yet know where Buffalo Woman’s remains are.

Skibicki, a 35-year-old Winnipeg man, has been charged with first-degree murder in her death.

He is also facing three other first-degree murder charges for the deaths of Morgan Harris, Marcedes Myran and Rebecca Contois.

‘How else would they find out?’

Darryl Contois, who is not directly related to Rebecca Contois, and Robinson are among the more than 200 people who joined a Facebook group called Justice for Buffalo Woman. The group was created to share updates and information about missing women who could be the unidentified homicide victim.

Robinson says hitting the pavement and actually speaking to people in the community is key.

“Our homeless population, they don’t have access to TVs or social media and stuff like that,” he said. “If we weren’t [hanging up posters and talking to people], then most of them wouldn’t know.”

Harris, Myran and Rebecca Contois used shelter services on and around Main Street, and it’s possible Buffalo Woman did, too

Robinson says many people the pair spoke to on Sunday — homeless or not — didn’t know about the killings.

Contois says about 18 other people joined the pair, picking up posters and distributing them from Main Street to West Broadway.

Winnipeg police released a photo of a jacket they say is similar to one Buffalo Woman wore. It’s a reversible Baby Phat jacket with a fur hood and a cat-like logo on the front and back.

“I approach [people] and ask them if they recognize this jacket, if they know who was wearing it around March,” said Contois.

Beyond the jacket, the information about Buffalo Woman is scarce. Police say they believe she was in her mid-20s, Indigenous and had an average build.

“A lot of the people that we talk to, they don’t want to talk to the police, but they come and talk to us,” Robinson said. “So it’s kind of a good [connection] between the people on the street and the police.”

Contois and Robinson say they’re forwarding any information to detectives investigating the case. The goal is to identify Buffalo Woman and to ensure her remains — and the remains of the other women — are retrieved.

Today, Contois says he’s feeling hopeful their efforts will be fruitful. They’ve covered a lot of ground and seen a lot of support.

“God willing, we’ll find out who Buffalo Woman is,” he said.