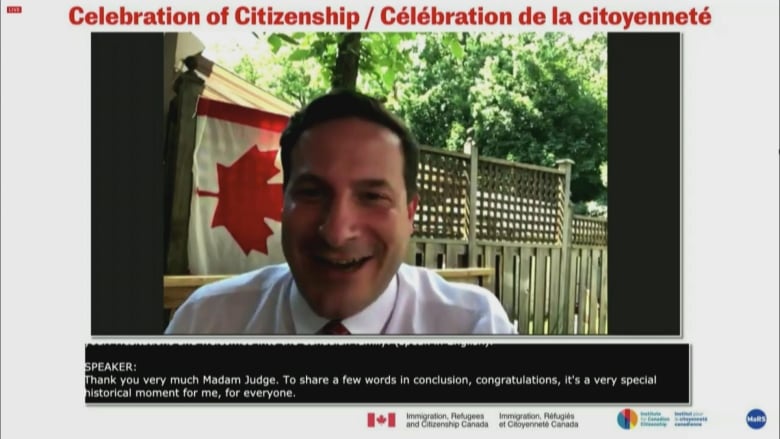 When Sweeny Karande was in her nursing program in India, her teacher presented her with an award as the best outgoing student.

“This is just the beginning,” her teacher said. “You can’t stop here.”

Karande took those words to heart.

The next nine years were full of new beginnings as she journeyed from India to Ontario to Nova Scotia and then the Northwest Territories, where she now works full time as a registered nurse.

There was another new beginning this Canada Day: Karande joined 18 others in swearing the oath to become a Canadian citizen.

Canada Day citizenship ceremonies are a holiday tradition, but this year, the COVID-19 pandemic means the celebrations are going digital.

People ranging in age from six to 66 were taking the oath, representing 13 different countries, the Immigration Department said.

While they’re all united in their new citizenship, some have another bond: they work in health care.

The COVID-19 pandemic has highlighted the role new Canadians play in the health-care system. According to data from the 2016 census, more than a third of the 245,000 people working as nurse aides, orderlies and patient service associates are immigrants.

From India to the Northwest Territories: A nurse’s story

Karande, now 29, grew up in a large village in the southwestern Indian state of Goa, where she’d always wanted to become a nurse.

Her family couldn’t afford university tuition, so she enrolled in an auxiliary nursing and midwifery program.

When a recruiter for Canadian personal support worker programs came calling in 2010, her siblings pooled their money together so she could enrol.

She arrived in Cornwall, Ont., the next year, where she lived in a two-bedroom apartment with three other Indian students, often relying on the food bank to get by.

She did a placement at St. Joseph’s Continuing Care Centre, and one night her colleagues knocked on her door. On the street was a whole SUV filled with food for her and her roommates.

She would find equally welcoming communities, she said, when she arrived in Halifax for nursing school, and again when she moved up to Hay River, N.W.T., to take a full-time nursing job.

“This was my end goal, and finally I am a nurse and I’m getting my citizenship — this is really awesome,” she said. “I love every bit of it.”

Omair Imtiaz was also becoming a citizen on Canada Day, a feat he also attributes in part to the kindness and guidance of many near strangers along the way.

He was sent to Canada by his father in 2007 to join his older brother, already in Moncton, N.B.

From there, he moved to P.E.I, and found himself struggling to balance the demands of his undergraduate degree, part-time jobs and the freedom of student life in Canada. He ended up suspended from university and was on the cusp of losing his student visa and being forced to leave.

A classmate sat him down at a party and said she’d help him get through it.

The day before his visa expired, they went to re-enrol in school. He had intended to study to be a pharmacy technician but he changed his mind after speaking with the enrolment officer and he signed up for a residential care worker program instead.

The woman from the party? She became his wife. And the program led to the job he has now held for eight years at the John Gillis Memorial Lodge in Belfast, P.E.I.

“I can never count my blessings enough for what Canada and its people have given me,” he said. “So this is my way of giving back to the community, giving to the most vulnerable.”

Imtiaz, 32, said when he walked through the doors of the care home, many residents had never seen a South Asian person before.

He was met with hostility, but within days, familiarity bred comfort and then genuine friendship, he said.

“Education and that personal contact can go a long way,” he said.

Karande said she has fielded her own experiences with racism. But it was finding out about Canada’s own record on that score that has stuck with her more.

While in nursing school, she learned about Indigenous history and the impact the residential school system was having on the current health and well-being of Indigenous communities.

India had its own experiences with British colonialism that linger to this day, she said, but to be confronted with the harmful effects on Indigenous people in Canada shocked her.

She decided to turn the anger to action.

“I felt like I was obligated to do so,” she said. “I was just doing my part.”

She began to search for nursing jobs in Indigenous centres, finally landing in Hay River, a town of nearly 4,000 people where just under half identify as Indigenous.

She has been there now for almost a year, working at the Hay River Health and Social Services Authority. She described the move up North as scary, given what she’d heard about the cold, but has now embraced the outdoor lifestyle.

She is also committed to reconciliation.

With her citizenship comes the right to vote — a right that she intends to take seriously.

“It is a privilege to have the opportunity to make change,” she said. “I believe there is a lot of change that needs to be implemented in terms of Indigenous people, in terms of different races and how they are being treated in Canada. I’m very excited that I’m finally a citizen.”