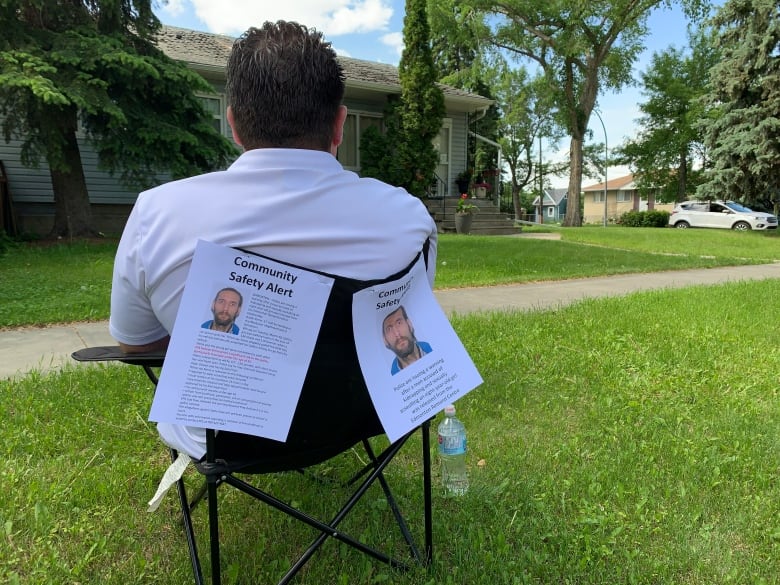 Protesters had spent two weeks keeping watch on the bungalow in the McQueen neighbourhood after Stene was released on bail under house arrest near his alleged eight-year-old victim. His address was posted on social media.

But when Stene asked to go back to jail for his own safety, many protesters didn’t go home.

Instead, they headed 12 kilometres north where another demonstration had erupted outside the residence of Donald George Dupuis in St. Albert, Alta. The high-risk offender was said to be living near his victim after serving 12 months for sexual interference of a child.

Within days, news spread that Dupuis had moved out of the neighbourhood, but protesters aren’t done.

The People vs. Predators Facebook page, previously named The People vs. Wade Stene page, has amassed nearly 3,000 members and is organizing another protest Saturday in Fort Saskatchewan, Alta. That’s where Damien Christopher Starrett — who was charged with second-degree murder in the death of his one-year-old son Ares — is out on bail.

Dozens of supporters on Facebook said they planned to attend. Others on the page shared their own personal stories or opinions about child predators and frustrations with a criminal justice system many suggested is broken.

The people vs. Wade Stene

Last March, Stene allegedly pulled an eight-year-old girl he didn’t know into a vehicle, sexually assaulted her, then dropped her off in the McQueen neighbourhood. Ten days later, police charged him with kidnapping, sexual assault with a weapon and threats causing death or bodily harm. Court records show it’s Stene’s first offence in Alberta.

In a public warning, Edmonton Police Service (EPS) said Stene posed a significant risk of harm to the community.

Police later explained to CBC News that they have a duty to warn the public about significant health and safety risks, citing Freedom of Information and Protection of Privacy legislation, as well as common law rule.

That warning set off alarm bells in the McQueen neighbourhood where some residents told CBC News that initially the community was united in wanting Stene out.

Zak Gladue, who has a daughter and lives just outside McQueen, said he protested at Stene’s residence for 13 days because of  “a bad call on behalf of the justice system.”

“I feel the victims don’t have a voice,” Gladue said in an interview. “It’s about community coming together and realizing if there’s a problem, we can fix it.”

He emphasized that the protest should remain peaceful but said rocks and eggs were thrown after some outsiders turned up.

It’s about community coming together and realizing if there’s a problem, we can fix it.”​​​​​– Zak Gladue

“That’s not what we’re about,” Gladue said. “We are a peaceful protest. We don’t want the violence. We don’t wish any harm against Mr. Stene or Mrs. Stene, and anybody who comes by here — if you’re coming by to cause problems, you’re not welcome.”

But some residents who spoke to CBC News said the protest became more aggressive, stretching on into the night, where an increasing number of protesters appeared to be outsiders. Some of those who raised concerns on social media were accused of supporting pedophiles.

Meanwhile, demonstrators set up tents and a porta-potty where a coffin and noose were also spotted.

With kids nearby, some protesters yelled, “F–k you, Wade” repeatedly on a megaphone. The white jeep allegedly used in the abduction was smashed, with the word “scum” scrawled onto the exterior.

Edmonton police confirmed to CBC News that officers are investigating a number of alleged criminal acts in relation to the protests.

Vigilantism on the rise, expert says

Scott Blandford, a public safety programs co-ordinator, professor at Wilfrid Laurier University and retired police officer, described the Stene protest as the emboldening of vigilantism, which he said appeared to be on the rise.

He said it’s partly the result of how quickly false information can spread on social media, along with a greater distrust of government and policing and a lack of understanding of how the justice system works.

“In this day and age, there’s that demand for instant justice, and that’s just not the way our system is designed,” Blandford said.

“Who’s to say that he could afford to move anywhere else or stay in a hotel room, plus the fact that on the other side of the coin — why should someone be penalized? Which forcing them to move essentially is a punitive measure before they’ve even been convicted.”

Partly due to concerns about vigilantism, DeVries instead launched a petition that drew nearly 17,000 signatures in support of removing Stene from the neighbourhood.

DeVries, whose eight-year-old daughter is a close friend of the alleged victim, said he wanted to show support for the family and restore a sense of safety to a neighbourhood still healing after the alleged crimes.

“He hasn’t pled either way in court. I get that,” DeVries said. “But recognizing that a crime was committed in our community, and he is the accused in that crime — that is factual.

“And to then place him back in the community seems to be lacking some of that common sense and the understanding of the psychological ramifications for a young kid on how that would affect her and her family, and also the rest of the community at large.”

“Without commenting on specific cases before the courts, our government believes that those found guilty of crimes involving sexual violence and violence against children should face serious sentences appropriate to their crimes and remain incarcerated as is necessary to protect public safety,” wrote Jonah Mozeson, press secretary to Justice Minister Doug Schweitzer, in an email.

Retired Edmonton police detective Wil Tonowski said he understands why people are so critical of the justice system. He used to feel the same way, until he attended hundreds of parole board hearings during his last decade at EPS where he was in charge of the high-risk offenders section.

He said the success of the programs far outweigh the failures.

“We’re right up there with the very best in the world,” Tonowski said.

Among the examples, Tonowski lauded tailor-made sentencing, top-notch rehabilitation programming that interrupts the crime cycle and strict release conditions approved at several levels that can include as many check-ins as twice a day.

Tonowski said police also work with offenders to try to find a safe place for them to work and live so they won’t reoffend again — describing it as a tough balance.

“You want to warn the public that this individual is out there again,” he said. “On the other hand, you can’t just throw them out there with no support system whatsoever … which increases his risk level and then he’s reoffending again.”

But Tonowski said an offender should never be released in the same area as the victim.

“Something like that warrants some sort of an inquiry,” he said.

In jurisdictions outside Edmonton, RCMP spokesperson Fraser Logan said a member of the high-risk offender program works directly with a released offender, as well as social workers and Alberta Health Services to seek appropriate services and ensure their mental health needs are met.

“It is the RCMP’s goal to balance community safety, enforcement of the offender and to mitigate any risk they may pose while assisting the offender reintegrate into the community,” Logan said.