US moves one step closer to imposing fresh Russia sanctions 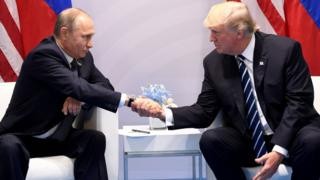 The US House of Representatives has voted to impose fresh sanctions on Russia, despite President Donald Trump objecting to the legislation.

Senior officials will be targeted in retaliation for alleged Russian interference in the US 2016 election.

The bill is likely to complicate President Trump’s hopes of improving relations with Russia.

It needs to be passed through the Senate before it can be sent on to the president to be signed.

The White House says it is reviewing the bill, and it is unclear whether the president will veto it.

“While the president supports tough sanctions on North Korea, Iran and Russia, the White House is reviewing the House legislation and awaits a final legislative package for the president’s desk,” White House spokeswoman Sarah Sanders said in a statement.

Russia’s relationship with the president has dogged his first six months in office, amid allegations Moscow interfered to help Mr Trump get elected.

Mr Trump has also piled pressure on his attorney general over the Russia inquiry. He has publically labelled Jeff Sessions “weak” and said he was “disappointed” in Mr Sessions’ decision to recuse himself from the investigation.

The House voted overwhelmingly to back the measures, which will also see fresh sanctions against North Korea and Iran over ballistic missile tests.

The bill, which passed by 419 to three, was described by House Speaker Paul Ryan as a sanctions package that “tightens the screws on our most dangerous adversaries in order to keep Americans safe”.

The planned sanctions on Russia were drawn up in part to further punish its annexation of Crimea in 2014. They will place new restrictions on oil and gas projects, affecting the Nord Stream 2 pipeline from Russia to Germany.

The legislation codifies sanctions imposed by Barack Obama over Russia’s Ukraine interventions, which would make lifting them more difficult.

It also expands restrictions on doing business with Russian companies, in particular on energy development. That has the Europeans very worried they’ll be penalised for supporting Russian pipeline projects.

But what concerns the White House is a measure that limits the president’s traditional right to waive the sanctions: he would be forced to consult congress first. That and the broad bipartisan support for the legislation shows just how wary lawmakers are about Mr Trump’s pro-Moscow approach.

The Senate had overwhelmingly passed an earlier version of the bill: the differences between the two have to be worked out before Mr Trump decides how to respond.

The White House has suggested the president may support the bill after some changes to the original draft, but he would have little room to manoeuvre anyway because Congress almost certainly has enough votes to override a veto.

Prior to the vote, Russian Deputy Foreign Minister Sergei Ryabkov said such measures would plant a “dangerous mine” under the foundation of ties.

Mr Ryabkov said: “All this is very worrying. We can see no signs that that Russophobe hysteria that has engulfed the entire US Congress is dying down.”

After it passed, Russian MP Leonid Slutsky said the sanctions “undermine the prospects for the restoration of Russian-American relations and further complicate them for the foreseeable future”.

If the legislation passes through the Senate, it would provide a headache for President Trump, who has signalled a more conciliatory approach towards Moscow.

White House spokeswoman Sarah Huckabee Sanders said on Monday: “He’s going to study that legislation and see what the final product looks like.”