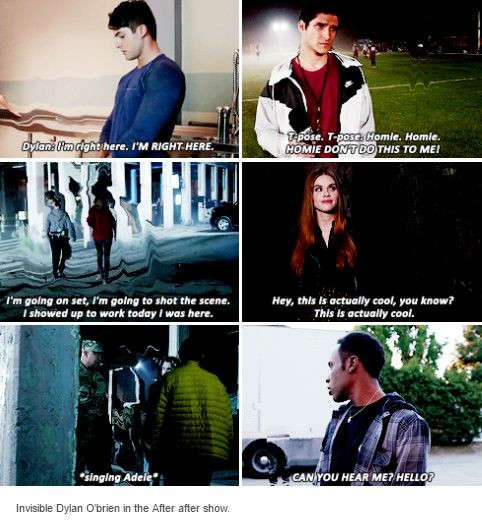 Get ready, Teen Wolf fans, because this this a bit of a tear-jerker.

The cast of the long-running MTV series gathered at San Diego Comic-Con one last time this weekend and sat down with E! News to talk about saying goodbye. Star Tyler Posey even busted out a new word just for us.

“And you used it at Comic-Con!” Hennig added. “It’s weird, because I don’t think anybody else is having the same experience as us.”

Posey described a dinner during last year’s Comic-Con, just after it was announced that Teen Wolf was ending, where he watched a montage of all the different promos put together for each season.

“I had been to every single one of these promos. I was there for them all, and it really hit me hard,” he told us. “Like, I started shaking, and like, holy s–t, this is real, and really happening. It was the first time I ever really felt that when it comes to Teen Wolf.”

While Christian told us that his final scene was bloody, Hennig’s was…not.

“My exit was naked,” she revealed. “Came in naked, left naked, cried on a pillow, wasn’t supposed to…”

“I was there for both those times, too!” Posey exclaimed.

While he wouldn’t say if the ending Posey envisioned involved Hennig naked, the star did say he had an end in mind.

“I kinda just saw the ending. I had an ideal scene ending,” he told us. “It didn’t happen that way, because the writers aren’t in my head, but I’m still really happy with how it ended. I just had a different idea for it.”

“The last shot of the show is really beautiful,” Hennig added.

Melissa Ponzio, who has played Scott McCall’s badass mom since the very beginning of the show, told us she was feeling “all of the emotions” as the show ended.

“Happiness and sadness and…”

“For me, it definitely hit after there was no work,” Khylin Rhambo told us. “The week after, once I realized oh man, there’s no call times. You get into a rhythm of filming, and once it’s over, that’s when it really hit me. But the last day was moreso like a beautiful experience. I just got to watch everyone have a special moment together. It was just like a love bond between everyone.”

“I think, too, when the fans found out it was the last season, watching that hit was really hard,” Carver told us. “But I think that they’re going to be very excited to see how everything sort of gets wrapped up in this next season.”

Speaking of the fans, Hennig observed that this year’s panel was a little bit different from panels in the past, when the show wasn’t about to end. First of all, it was moderated by Ponzio, Ashby, and creator Jeff Davis, making it more of a conversation between cast members than a typical panel.

“This one was a little melancholy, a little solemn,” she told us. “I think they wanted to make sure they didn’t miss out on anything we said. Normally they’re like screaming, yelling, and I think they were really listening to make sure they got the last of it, and I think we were doing the same. A couple of us were actually nervous for the first time. It was an interesting vibe.”

She described the end of the show like the end of high school, and the rest of the cast agreed.

“You’re excited for what’s next and you’re also scared to say goodbye,” Christian added. “That’s what it feels like.”