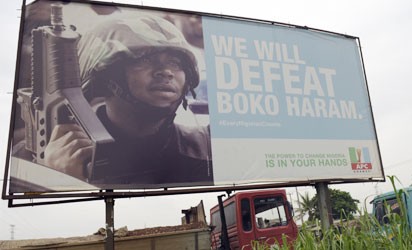 By Joseph Erunke, with agency reports

The United States Department of State is worried about Nigeria’s inability to effectively secure and hold onto territories recaptured from Boko Haram terrorists despite the successes recorded by the Multi-National Joint Task Force.

This came as the UN in New York set up a new fund, Nigeria Humanitarian Fund, NHF, primarily to tackle the crisis-hit North East Nigeria caused by the destructive activities of Boko Haram terrorists. A photo shows a campaign signboad displayed by the ruling All Progressives Congress (APC) to show its readiness to defeat Boko Haram Islamists on assumption office at Ogijo, Ogun State in southwest Nigeria, on July 3, 2015. Boko Haram carried out a fresh wave of massacres in northeastern Nigeria on July 3, locals said, killing nearly 200 people in 48 hours of violence President Muhammadu Buhari blasted as “inhuman and barbaric”. AFP PHOTO

The US government’s assertion is contained in the United States country report on terrorism for the year 2016 submitted to the US Congress in compliance with title 22 of the US Code.

The report, published on July 19, highlighted the successes and failings of the Nigerian Army in the fight against Boko Haram terrorists.

It indicated that the Federal Government’s progress report on the fight against terror was merely a duplication of failed efforts carried over from the end of last year’s fighting season.

The report stated:  “Despite gains made by the MNJTF, much of its reported progress was merely duplication of failed efforts carried over from the end of the last dry/fighting season.

“The Nigerian military was unable to hold and rebuild civilian structures and institutions in those areas it had cleared.

“Most of the remaining students abducted by Boko Haram in Chibok remained in captivity, although one girl was found in Borno, and the government of Nigeria successfully negotiated the release of 21 of the kidnapping victims.”

According to the report, terrorist activity accounted for the displacement of nearly two million persons in Adamawa, Bauchi, Borno, Gombe, Taraba, and Yobe states.

Although the report noted that the Nigerian government continued to facilitate the return of internally displaced persons to their home communities, this was sometimes done without first putting “appropriate conditions in place for safe, informed, and voluntary returns.”

“There was no evidence in 2016 of the implementation of a coordinated plan to restore civilian security in recaptured territories.”

Accuses FG of failingto get help

Accusing the Nigerian government of failing to get help from regional organisations, the report said: “The Nigerian government has not invested significant resources or time enlisting regional organisations, such as the Economic Community of West African States and Economic Community of Central African States, to assist with the Boko Haram problem.

“Instead, the government of Nigeria preferred to engage Boko Haram militants in direct, unilateral military action and through the MNJTF, which is headed by a Nigerian military officer.”

Military keeps mum on US claims

Asked to respond to the United States allegation, the Nigerian Army, through its spokesman, Brigadier-General Sani Usman, referred Vanguard to Defence Headquarters for comments.

But several calls and a text message sent to the known telephone numbers of the Defence Headquarters’ spokesman, Major General John Enenche, were not picked or responded to.

Enenche later issued a statement, where he said the Defence Headquarters appealed to the general public and the people in the areas affected directly by the negative acts of terrorism and criminality, to come forward with credible information that would further assist the security and response agencies to tackle the menace of terrorism .

“It is necessary to point out some of key information required, which he said included terrorists sleeper cell locations terrorists, terrorists concentration areas and outpost locations, collaborators and informants to the terrorism,” he said.

Meanwhile, the UN has set up a new fund, Nigeria Humanitarian Fund, NHF, primarily to tackle the crisis-hit North East Nigeria caused by the destructive activities of Boko Haram terrorists.

The UN said the fund has also allocated more than $10.5 million to help thousands of women, children and men in need of life-saving humanitarian assistance.

It said: “The fund plays a vital role in ensuring an effective, coordinated, prioritized and principled humanitarian response, providing funding to international and national NGOs, UN agencies, funds and programmes, and the Red Cross/Red Crescent societies, with a focus on front-line responders.

“The humanitarian crisis in Nigeria’s north-east and the Lake Chad region is one of the most severe in the world today.