US attorney general says four charged in crackdown on leaks 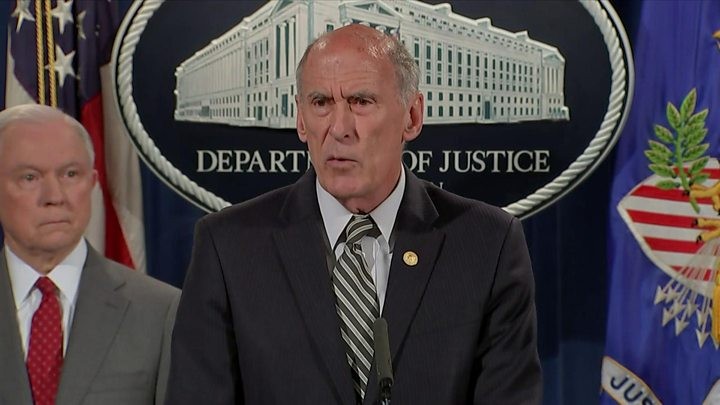 The US attorney general has said four people have been charged over leaks as the Trump administration launched a crackdown on embarrassing disclosures.

America’s top prosecutor said the administration has tripled the number of active leak probes since January.

At Friday’s news conference, Mr Sessions said no government could be effective when its leaders could not talk freely in confidence with foreign leaders.

“I strongly agree with the president and condemn in the strongest terms the staggering number of leaks undermining the ability of our government to protect this country,” he told reporters.

He said there had been a “dramatic” increase in recent months of unauthorised disclosures to the media and even foreign adversaries.

The attorney general also said he wanted to review policies on media subpoenas – compelling journalists to testify in court – to balance the role of the press with protecting national security.

Jeff Sessions spoke about the Justice Department’s efforts to crack down on national security leaks before television cameras and reporters, but his intended audience was almost certainly the man in the Oval Office.

Last week the president lambasted his attorney general for not doing enough to stifle a torrent of leaks over the past six months. On Friday morning Mr Sessions essentially replied: “See? I am doing something!”

What’s more, the attorney general served his anti-leak entree with a generous helping of media-bashing, warning that while he respected freedom of the press, he was reviewing when prosecutors could force journalists to reveal their sources – or face criminal sanction.

That’s a dish specially crafted for the president’s tastes.

Earlier this week, newly minted chief of staff John Kelly reportedly called Mr Sessions and told him that, despite the president’s recent swipes, his job was safe. Perhaps Friday’s event is part of a larger effort at fence-mending between the commander-in-chief and his former political confidant.

The attorney general will have to deliver results, however. If he can’t stop the leaks, it is doubtful the president will be satisfied. And if there’s one truth in Washington, it’s that the leaks never really stop.

The move is likely to send a chill through US newsrooms that have been breaking almost daily scoops attributed to unnamed sources, which have embarrassed the White House.

Mr Sessions was joined by Director of National Intelligence Dan Coats, who issued a stark warning to leakers.

“Anyone who engages in these criminal acts is betraying the intelligence community and the American people,” he said.

“We feel the pain of those betrayals intensely and I can assure you that I will do everything in my power as director of national intelligence to hold those people accountable.

“Understand this, if you improperly disclose classified information, we will find you, we will investigate you, and we will prosecute to the fullest extent of the law, and you will not be happy with the result.”

Only this week transcripts of rancorous calls between President Trump and foreign leaders surfaced in the Washington Post..

The US leader told Mexican President Enrique Pena Nieto that the US state of New Hampshire was “a drug-infested den”.

On the line to Australian Prime Minister Malcolm Turnbull, Mr Trump referred to himself as “the world’s greatest person that does not want to let people into the country”.

He also complained it was “the most unpleasant call all day”.

Mr Sessions did not share details of the four leak arrests.

But in June a 25-year-old National Security Agency contractor, Reality Winner, was arrested for removing classified material from a federal site in the state of Georgia.

The American Civil Liberties Union said the Trump administration was launching “a crackdown on leaks is a crackdown on the free press and on democracy as a whole”.

Spokesman Ben Wizner said: “Our founders understood that democracy depends on an informed citizenry, and leaders can’t be trusted to disclose vital information that reflects poorly on themselves.

“These first months of the Trump administration dramatically illustrate that point.”