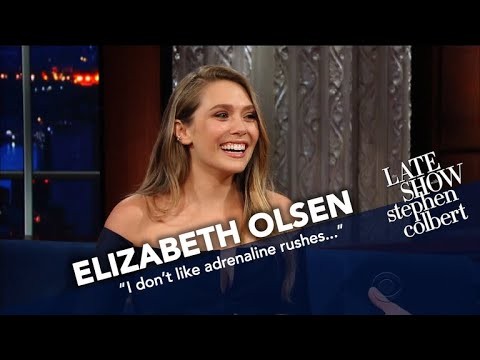 True, the actress is contractually bound to keep plot details secret. But as she explained to Stephen Colbert on CBS’ The Late Show Thursday, she’s being kept in the dark about what’s going with the other characters in the movie (in theaters May 4, 2018). So Olsen, who was on the late-night show to promote her new movie Wind River, ended up disappointing the TV host.

“The Avengers are taking over the show tonight because you’re here, Scarlet Witch. Falcon, Anthony Mackie is here. Jeremy Renner, Hawkeye, was in that clip right there,” Colbert said. “Is there chance I am in the Avengers and I don’t know it? Am I an illusion being cast by Loki?”

“Have you signed any top-secret papers recently?” Olsen asked.

“Do you have to do that? Do you have to sign top-secret papers to be in the Marvel MCU?” Colbert asked, to which Olsen replied, “I think so. I think I signed a lot of things before I joined.”

Colbert complained that other stars in the Marvel Cinematic Universe are “tight-lipped” about the films. “Is there anything you can tell me about what happens in the next Avengers movie?” Unfortunately, Olsen wasn’t much help. “This time, they actually decided to not give us scripts,” she shared. “They gave me my pages and then they explained other things that are happening.”

So when Olsen finally sees the movie, she’ll be just as “shocked and surprised” as the average fan. “I’ll be like, ‘Oh, I see! That’s what was happening to the world at that time!'” she laughed.

While talking about The Weinstein Company’s Wind River (in theaters now), Olsen said she wasn’t happy about the stunt work she had to do. “I don’t like adrenaline rushes,” she revealed.

“You’re in The Avengers!” Colbert teased. “What are you doing?”

“But those are really safe environments!” Olsen explained. “You have a stunt coordinator.”