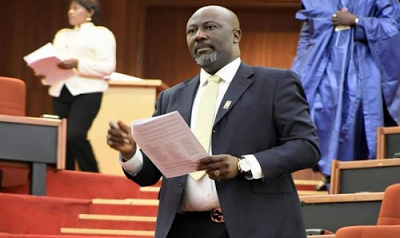 The Independent National Electoral Commission has received signatures from the electorates in Kogi West Senatorial District, asking for the recall of Senator Dino Melaye from the Senate.

Six bags, which contained the signatures of 52.3 percent of the electorates from the zone and other petitions, were submitted to the Commission in Abuja on Wednesday.

Kogi West, which Melaye represents in the Senate, has seven local governments areas.

The local governments and the percentage of voters who signed the recall petition showed that Yagba West had the highest number of voters asking Melaye to return home from the Senate.

A prominent member of the All Progressives Congress in Ijumu, Mr. Cornelius Olowo, who led the delegation insisted that the constituents were not satisfied with the quality of Melaye’s representation.

He said, “We want Senator Melaye back because of poor representation, he is also not accessible to us, he is unreadable and has no constituency projects.

“Apart from the fact that h has never called any town hall meeting, there has been a major gap between the senator and the people he claims to represent.”

He insisted that the Governor of the state, Mr. Yahaya Bello, was not the sponsor of the petition against the chairman of the Senate Committee on the Federal Capital Territory.

Olowo said, “We don’t need to lobby or allow anyone to lobby us. The governor and the senator are not from the same senatorial district.

“We believe that the Senate ought to be a place for people who can be trusted. We have stomach his excesses for more than two years now. We can’t continue anymore.

“We were the one that mobilised the voters and we did this for some days. Melaye was a pillar among those who installed the governor and was also the one who nominated the present secretary to the state government.”

The Director of Publicity and Voter Education at the commission, Mr. Oluwole Osaze-Uzzi, was not available to react to the submission of the petition.

However, he had earlier told our correspondent that the commission would conduct a referendum on the plan to recall Melaye.

Section 69 of the Constitution stipulates on how to recall senators from the Senate.

It states that (1) A member of the Senate or of the House of Representatives may be recalled as such a member if—
(a) there is presented to the Chairman of the Independent National Electoral Commission a petition in that behalf signed by more than one-half of the persons registered to vote in that member’s constituency alleging their loss of confidence in that member; and

(b) the petition is thereafter in a referendum conducted by the Independent National Electoral Commission within 90 days of the date of receipt of the petition, approved by a simple majority of the votes of the persons registered to vote in that member’s constituency.