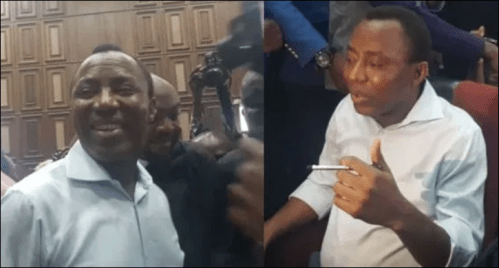 The Federal High Court in Abuja, has ordered the Department

of State Services, DSS to release human rights activists and

revolution now convener, Omoyele Sowore and Olawale Bakare, within the next 24 hours.

Justice Ijeoma Ojukwu giving the judgment also ordered the DSS to pay the sum of N100,000 to Sowore for refusing to release him on bail despite two court orders to that effect. R

The court adjourned the trial of the case brought against them by the Nigerian Government till December 6th for continuation. Recall that Omoyele Sowore had sued the Department of State Services (DSS) over his arrest and continued detention.

Sowore who has been in detention since his arrest on the 3rd of August, 2019, asked the court to order the DSS to pay him N500 million as general and aggravated damages for his detention and illegal violation of fundamental rights.