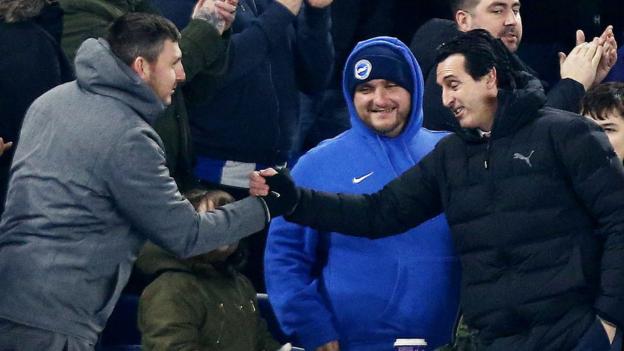 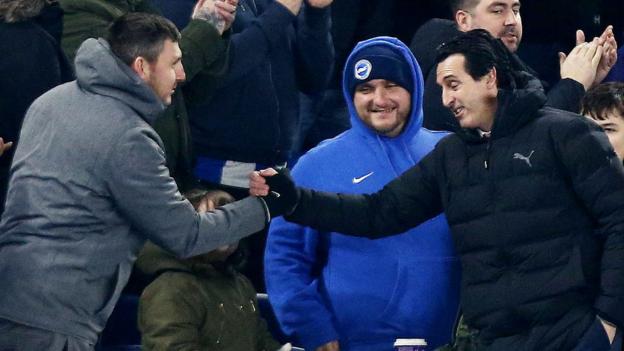 Arsenal manager Unai Emery has apologised for kicking a bottle which hit a Brighton fan towards the end of Wednesday’s 1-1 draw.

The Spaniard went to speak to the home supporter immediately after the incident and again at full-time.

“I said to them I’m sorry. It wasn’t hard but it touched one supporter,” Emery said after the game.

The Football Association will look into the incident, which was not included in the officials’ match report.

Emery added: “I said to them apologies because I kicked the bottle after a disappointing action for us in the last minutes.”

Pierre-Emerick Aubameyang had given the Gunners a fourth-minute lead in the Premier League match at the Amex Stadium and the visitors dominated much of the first half.

But a mistake by right-back Stephan Lichtsteiner allowed Jurgen Locadia to equalise for Brighton in the 35th minute.

Emery was disappointed by his team’s second-half display and took his frustration out on the water bottle on the touchline.

After apologising to the Seagulls fan, Emery appeared to explain his actions to the fourth official.

The officials had not included the incident in the match report as they were happy with the way it had been handled.

Former Manchester United manager Jose Mourinho was given a one-match ban after being sent off for kicking a water bottle down the touchline during his side’s Premier League game against West Ham in 2016.