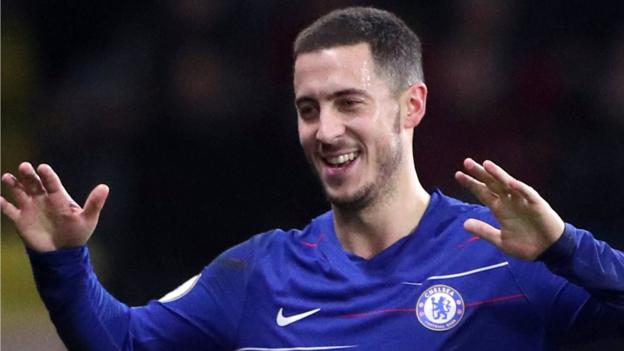 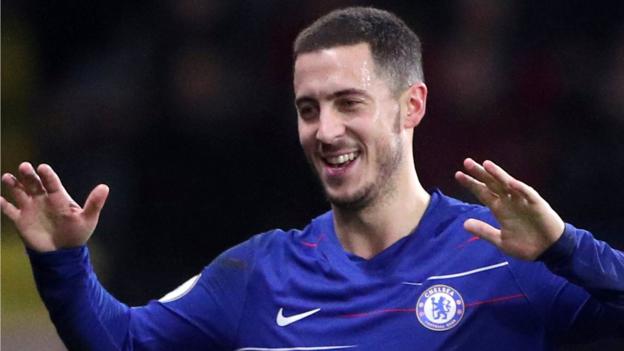 Eden Hazard says he wants to become a “Chelsea legend” after his two goals secured victory at Watford – and took him past 100 goals for the Blues.

Hazard, 27, became only the 10th player to reach that landmark when he collected Mateo Kovacic’s pass, took the ball around goalkeeper Ben Foster and calmly finished in first-half injury time.

Chelsea’s lead only lasted two minutes as Roberto Pereyra volleyed past Kepa Arrizabalaga from the edge of the 18-yard box to level.

But Hazard grabbed his second of the match – his 101st Chelsea goal in 322 appearances – in the second half when he converted a penalty after Foster had bundled him over.

The Belgium forward has been repeatedly linked with a move to Real Madrid and in October said it was his “dream” to join the Spanish side, although two days after that he ruled out a move to the Bernabeu in the January transfer window.

“To score 101 goals with this amazing club is something I will never forget, but now the fans, staff and players want more,” said Hazard, who helped Chelsea win the Premier League title in 2015 and 2017.

“I want to score more for this club and then try to be a legend like Frank Lampard, Didier Drogba and John Terry.”

His goals took the Blues back up to fourth after they had dropped below Arsenal following the Gunners’ 1-1 draw at Brighton earlier on Wednesday.

“Eden Hazard can play in every position,” added Blues boss Maurizio Sarri. “He played very well with two goals and could have had two or three assists. He can play with team-mates very well.”

It was a return to winning ways for Chelsea after they suffered a surprise 1-0 loss at home to Leicester City on Saturday and they had to work hard for the win, which leaves them 11 points behind leaders Liverpool.

Hazard, who joined Chelsea for £32m from Lille in June 2012, put the visitors ahead in the first minute of injury time at the end of the first half.

It came after Watford’s Etienne Capoue sloppily gave the ball away near the halfway line. That enabled Kovacic to break forward before releasing Hazard, and the Belgian did well to go around Foster and score his 10th league goal of the season.

After Watford had equalised, Hazard’s 101st club goal came in the 58th minute as he sent Foster the wrong way from the spot after the former England goalkeeper bundled him over in the penalty area.

Hazard’s quality proved to be the difference as Sarri again opted to use him as a ‘false nine’, with Alvaro Morata injured and Olivier Giroud, who has only scored one Premier League goal in 15 appearances in 2018-19, among the substitutes.

Chelsea had further opportunities. N’Golo Kante raced onto Hazard’s through ball but could only drag his effort wide, and Willian also was unlucky not to add a third for the visitors when his 20-yard strike rebounded off the outside of the post.

The only negatives for the Blues were a hamstring injury for Pedro and then the man who replaced him, 18-year-old Callum Hudson-Odoi, also going off late on.

Watford will feel they had enough chances to get something from the match at Vicarage Road as they suffered their first loss in four Premier League matches.

They had a chance after only nine minutes when Chelsea goalkeeper Kepa Arrizabalaga gifted a clearance to Gerard Deulofeu, but the Spaniard squandered the opportunity with a misplaced backheel that did not find team-mate Troy Deeney.

Abdoulaye Doucoure had a shot blocked by Jorginho and also fired a second attempt over the bar, before Deeney was denied by an excellent David Luiz challenge.

Hazard put the visitors ahead, but they were soon pegged back as Pereyra spectacularly volleyed in from Jose Holebas’ cross.

When it was still 1-1, Watford thought they should have had a penalty as Luiz collided with Deulofeu. Referee Martin Atkinson was not interested – but gave Chelsea a spot-kick of their own six minutes later, which Hazard converted.

The Hornets still had chances to secure a point, but Deeney shot over from eight yards out before keeper Foster joined the attack in injury time and attempted a long-range overhead kick, but failed to threaten Arrizabalaga’s goal.

Watford had started the day seventh, but wins for Leicester and Everton, against Manchester City and Burnley respectively, have dropped Javi Gracia’s team down to ninth.

After the match, Gracia confirmed that defender Christian Kabasele had been taken to hospital following a worrying injury after only nine minutes, when he slid into a post as he tried to stop Willian from scoring.

Kabasele continued after extensive treatment but only lasted a few more minutes before he was substituted, and was then carried down the tunnel on a stretcher.

‘I think it was a penalty’ – what they said

Watford manager Javi Gracia told Sky Sports: “I think we competed very well. I think we started the second half well by pressing high, but in that moment if you make a mistake they can score a second goal. Maybe after we scored our goal, in that moment we were playing better but we conceded the second.

“We know they are a very good team and maybe if there was another decision when we were playing and Gerard Deulofeu goes into the box, maybe it could have been different. I think it was a penalty.”

On the Watford goal: “We try to practice different corner kicks and I am happy for the goal but today it was not enough. We will try to improve and be better.

On Christian Kabasele: “At this moment I do not know anything because he is not with us, he is in the hospital.”

Chelsea manager Maurizio Sarri told BBC Sport: “Maybe Saturday in the first half we played with more quality than today. We had more attention and our determination continued for 90 minutes. We could have won with another result because in the last 20-25 minutes we missed opportunities. At the end of the match, we did very well, especially mentally.

“We don’t know how much Pedro is injured, we will evaluate tomorrow. That is the same problem with Callum Hudson-Odoi. He had a little injury a few days ago, yesterday it was good and he managed 50-55 minutes. We thought it was better to substitute him.

“We have to try to stay close to the top four. The target this season could only be to stay close and to enter into the Champions League. Liverpool are playing really well especially with the continuity to win the Premier League.”

Watford play at home against Newcastle on 29 December and are then away at Bournemouth on 2 January. Chelsea are at Crystal Palace on 30 December before entertaining Southampton on 2 January.