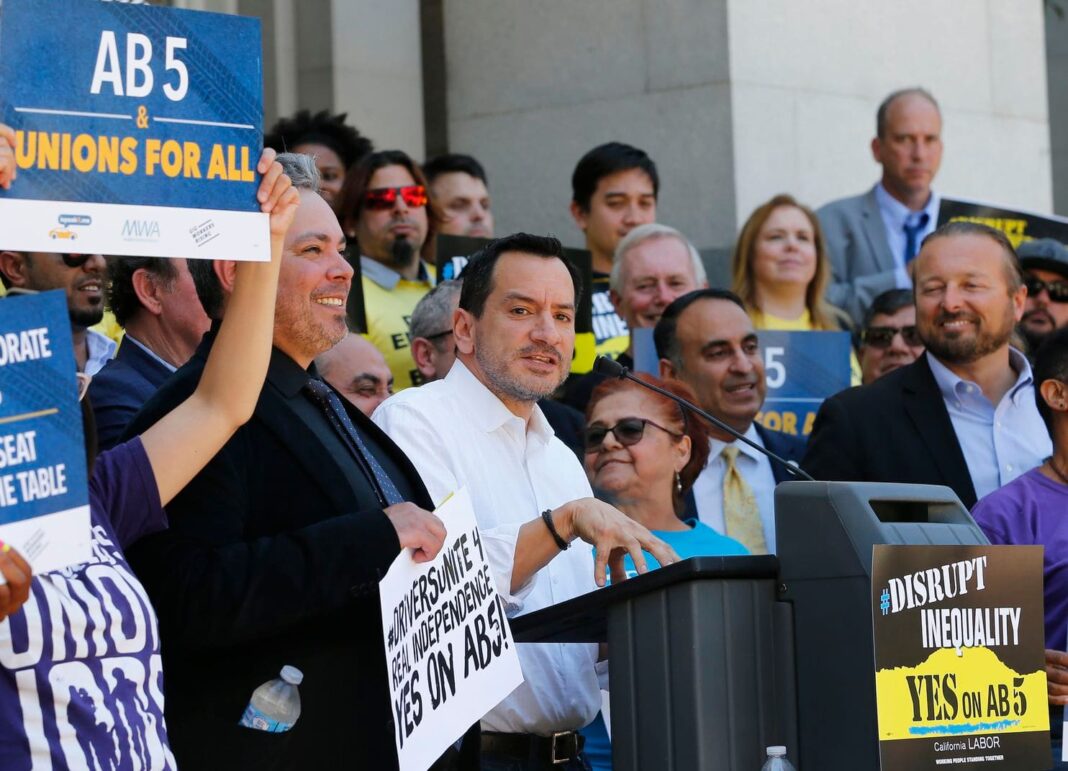 California Assembly Speaker Anthony Rendon endorses a bill that would limit when companies can label workers as independent contractors during a rally July 10 in Sacramento. (Rich Pedroncelli/AP)

San Francisco-based tech reporter covering automation and the future of transportation, including Tesla, Uber and Lyft

Uber and Lyft are floating a new proposal to pay drivers a $21 minimum wage. It may not add up.

The ride-hailing giants are floating the new wage and benefits as the California State Senate is set to vote on a bill that could convert contracted workers into employees, a worker classification fiercely opposed by Uber and Lyft because of the associated costs and liability.

To convince legislators, and drivers, that the move is unnecessary, Uber and Lyft have proposed a $21 hourly “on-trip” minimum wage. Workers also would have access to “portable benefits,” such as sick leave and workers’ compensation. Uber and Lyft have asked drivers to lobby for an alternative.

Those who study ride hailing say the wage proposed by the companies would amount to about $15 at most, because it excludes the time it takes for drivers to return from a drop-off and wait for another trip. Drivers typically spend about 30 to 40 percent of their time without a passenger, and roughly 10 percent is spent driving to pick up a passenger, according to studies. The pick-up period would be compensated.

“If you’re in a retail store and there’s nobody in the store several hours a day, you still pay for that time,” said Michael Reich, co-chair of the Center on Wage and Employment Dynamics at the University of California at Berkeley.

Uber argued that data shows its new minimum hourly wage would apply to just below 75 percent of the miles driven by its contractors.

Uber and Lyft have created thousands of jobs as part of the gig economy, a system that includes everything from putting together Ikea furniture to waiting in line for theater tickets. Most of those jobs are for contract workers, which helps limit liability — and wages — for companies organizing the assignments.

But as these companies grow and go public, many of the workers are clamoring for better rights and pay. California is one of the first states to consider legislation that would require gig workers to be treated as employees by law. That’s significant, because California’s legislation often influences other states, as it has with its tech privacy law, for example.

Advocates say it could help transform the gig economy nationwide so that drivers who have long advocated for steady pay and benefits could secure the rights that come with employment. Uber and Lyft didn’t say how their alternative wage floor would impact their bottom line, but Lyft pointed to data that showed most drivers already earn well above that floor in major markets — so the baseline would account largely for outliers.

The bill advanced out of the Senate’s labor committee in July and advanced out of an appropriations vote Friday ahead of a legislative session deadline on Sept. 13. It has garnered the support of prominent Democrats, including Democratic presidential candidate Pete Buttigieg this week, and could lay the groundwork for ride-share drivers to secure rights long sought by labor groups.

Known as AB5, the bill would establish a wage floor for certain categories of workers equal to two times the state minimum wage, which is $12 statewide and higher locally, for hours worked. It also would give workers legal protections that come with employee status, such as the right to overtime and provisions against sexual and workplace harassment. It is unknown whether the bill, which would be considered a precedent-setting measure, would apply to some or all workers in the gig economy.

Tony West, general counsel for Uber, said in an interview Friday that the company’s proposal still brings the wage floor above the minimum wage while covering expenses such as wear and tear. “Labor has been fighting for $15 for a while,” he said. “And $15 is much higher than the minimum wage in most places, including California.”

West added that Uber is also pushing for sectoral bargaining, a framework advocated by labor groups in which gig economy workers could bargain as a unit without company unionization. That would allow drivers or food-delivery couriers to bargain with all of the companies they serve, limiting cost differences.

Lyft spokesman Adrian Durbin said it remains to be seen what the ballot initiative would entail, but the companies hoped to avoid reaching to that point with a compromise.

Mostafa Maklad has driven for both Uber and Lyft in the Bay Area for a few years. He supports the bill, and says the companies’ messaging has been misleading, driving a wedge between older drivers who have seen how the companies operate and newer drivers.