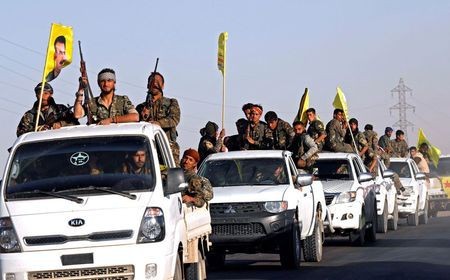 A Reuters correspondent saw smoke rising above the city and heard mortar fire, but did not see air strikes while in Raqqa.

A field commander of the Syrian Democratic Forces (SDF), an alliance of Kurdish and Arab militias, said he expected the operation to end on Monday. The U.S.-led coalition that backs them said it could not give a timeline.

SDF spokesman Mostafa Bali said they were fighting Islamic State in only one small zone of Raqqa in the evening, around the city’s national hospital and stadium.

Bali said he could not determine how much longer the battle would take. “The clashes are ongoing,” he added.

A convoy of Syrian Islamic State fighters quit Raqqa on Saturday night with their families, leaving only 200-300 foreign jihadists to mount a last stand, the SDF has said.

The SDF is now poised to end Islamic State’s rule over a city where it had launched a string of lightning victories in 2014 and plotted attacks on civilian targets across the West.

Its defeat in Raqqa mirrors its collapse across Iraq and Syria, where its enemies have driven it from cities, killed its leaders in air strikes and regained the oil fields that funded its self-declared caliphate.

Islamic State lost Mosul in Iraq, its largest city and most prized possession, after months of fighting in July. The militants, which at their height ruled millions of people in both countries, are now forced back in Syria into a strip of the Euphrates valley south of Deir al-Zor and desert on each side.

“We have conducted some (air) strikes in the last 24 hours, but I suspect that that will pick up here very soon with the SDF advancing into the final remaining areas of the city,” said coalition spokesman Colonel Ryan Dillon.

The SDF said they gained control of six more districts on Monday. The coalition has supported the SDF with air power and special forces throughout its Raqqa campaign, which began in November with an offensive to isolate the city.

The battle inside Raqqa started in June, and the intense air strikes and street-to-street fighting drove many of its people to refugee camps and left much of the city a mess of concrete debris.

The field commander in Raqqa described Monday’s fighting as “a clearing operation” and said he expected it to be completed by the end of the day with the SDF controlling the whole city.

Ilham Ahmed, a senior Kurdish leader who co-chairs the SDF’s political affiliate, said earlier she expected the end of the offensive to be declared “within hours or days.”

A Reuters correspondent was with an SDF sniper unit on a frontline facing the hospital complex that represents one of Islamic State’s last strongholds in the city, and saw two men in camouflage clothing climb a building and raise a flag.

Cars in the streets below had loudspeakers mounted on their roofs broadcasting messages to the last Islamic State fighters telling them they would not be ill-treated if they surrendered.

Another SDF field commander, who gave his name as Ashraf Serhad, said he had heard that 250 IS fighters remained and on Sunday he had seen several vehicles leave the hospital carrying some who had surrendered.

Saturday night’s convoy included about 100 IS fighters and nearly 200 family members, said Omar Alloush, a member of the Raqqa Civil Council set up under SDF auspices to run the city.

The fighters who left in the convoy, as part of a deal brokered by tribal leaders, are being held by security forces before interrogation and may be tried in court, he added.

The deal also allowed civilians to leave IS-held districts. Dillon said about 3,500 civilians had left the militant-held parts of the city in the past week.

The strongest group in the SDF is the YPG, a Kurdish militia that Turkey regards as an extension of the PKK, which has waged an insurgency against Ankara for three decades.

YPG influence across swathes of northern Syria including in majority Arab areas, and its backing by the U.S., has provoked disquiet in Turkey.

The U.S.-backed offensive has pushed Islamic State from most of northern Syria, while a rival offensive by the Syrian army, backed by Russia, Iran and Shi’ite militias, has driven the jihadists from the central desert.

When the jihadist group was entrenched in Syria and Iraq, it turned Raqqa into a planning and operations hub.

Many of its leaders were at times based there, and former hostages said Mohammed Emwazi, better known as Jihadi John, imprisoned them along with those he later executed in a building near the city.

The group killed dozens of captured Syrian soldiers there in July 2014 and made the city the site of a slave market for Yazidi women captured in Iraq and given to fighters.

The coalition has said Raqqa was a center for attacks abroad, and in November 2015, after militants killed more than 130 people in Paris, France launched airstrikes on Islamic State targets in the city.

But as the group defends its last patch of bomb-cratered ground in the city, the cost of the battle lies evident all around. Much of Raqqa lies ruined, hundreds of civilians have been killed, and thousands more have fled.

(Reporting by John Davison and Rodi Said in Raqqa, and Sarah Dadouch and Ellen Francis in Beirut; Writing by Angus McDowall; Editing by Angus MacSwan)