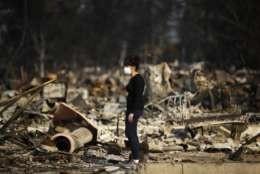 On one side of their mid-century style home, the deadly wildfires that ravaged parts of Northern California for more than a week wiped away the houses of neighbors they have known as long as two decades. On the other side, were those like the Andrews, who were spared.

On Monday as calm winds gave an advantage to firefighters trying to tame the flames, the couple balanced their good fortune against the losses suffered by many friends.

“It was disbelief and just feeling like the luckiest guy on earth,” Tom Andrews said. “I can’t believe, I mean, total destruction 50 feet away and to have our house still standing here.”

Ask the CIO: Online Chat with John Owens of the U.S. Patent and Trademark Office.

For his wife, a real estate agent who sold many of the homes to friends on Wikiup Drive, there was bitter along with the sweet.

“It’s heartbreaking,” she said. “I’m trying not to have survivor’s guilt, I think they call it. But we’ve been here 20 years this week. We raised our kids in this house. So many of the families on this hill raised their kids.”

After days of wind gusts that constantly fanned the fires, lighter wind offered a chance for crews to make greater gains, and thousands more people were allowed to go home more than a week after the blazes that have killed more than 40 people began.

Improving weather, the prospect of some rain later in the week and tightening containment of the flames were tempered by the first death from the firefighting effort — a driver who was killed when his truck overturned on a winding mountain road.

Many of those who returned knew in advance whether their homes were standing or reduced to ash.

Satellite images, aerial photos and news reports with detailed maps of entire neighborhoods had given homeowners in populated areas a pretty clear idea of the fire’s path. Some had seen the flames coming as they fled. Some families in rural areas had to wait until they laid eyes on their property.

The return home was emotional even for those whose properties were spared.

“When we came up to check on it, we were amazed it was here,” said Tom Beckman, who credited his neighbor’s two sheep with chomping vegetation surrounding his home and keeping the fires at bay.

“All the trivial things we have to work on — cleaning up, replacing the stuff in the fridge and freezer — that’s nothing compared to my friends who lost their homes,” Beckman said.

The smell of smoke remained thick in the air and spread to the San Francisco area, but skies were clearer in some places.

The truck driver, who had been delivering water to the fire lines, crashed before dawn Monday in Napa County on a roadway that climbs from vineyards into the mountains. No other details were available about the accident, which was under investigation, said Mike Wilson, a fire spokesman.

In the historic main square of the wine and tourist town of Sonoma, a statue of the community’s 19th century founder was draped with signs thanking firefighters who have saved the town from disaster.

“The love in the air is thicker than the smoke,” read a sign on the bench that displays the statue of Gen. Mariano Vallejo, which was wearing a face mask.

Although the weather was still hot and dry, the calmer winds and the possibility of rain should help crews tamp down the deadliest, most destructive cluster of blazes in California history.

“Any sort of moisture is welcome at this point,” said Scott Rowe, a meteorologist with the National Weather Service. “In terms of fire, the weather outlook is looking to be improving.”

A fraction of an inch is predicted to fall late Thursday in Sonoma and Napa counties, though fire officials noted that if showers bring more wind than moisture, it could spell trouble for firefighters.

Crews continued to battle flames that have crossed a mountain from Sonoma County to Napa County. Three helicopters repeatedly dipped water buckets into a reservoir and made drops to stop flames from crawling downhill toward historic wineries in the Napa Valley.

Most of the people reported missing have been located, and authorities said many were false reports from people far away who could not get in touch with friends or relatives.

About 100 people remained unaccounted for. Sonoma County Sheriff Rob Giordano said he expects some of those will be found dead in burned-out homes.

Before they let people return to view the damage to their homes, authorities want to search thoroughly for remains and make sure the area is safe — a process that could take weeks, Giordano said.

About 40,000 evacuees were still waiting for permission to go back to their communities, down from a high of 100,000 on Saturday.

While police kept people from burned-out neighborhoods, some managed to sneak past road blocks to view the damage.

Janis Watkins wasn’t so lucky. She was turned back from Santa Rosa’s Wikiup neighborhood, where she wanted to see if the home she grew up in — built by her father — had survived.

She was almost certain it was lost, as well as a home where she raised her family in another part of the city.

“It appears that both my family homes are gone,” she said, tears in her eyes. “The landmarks of my life are gone. It’s a big emotional loss.”